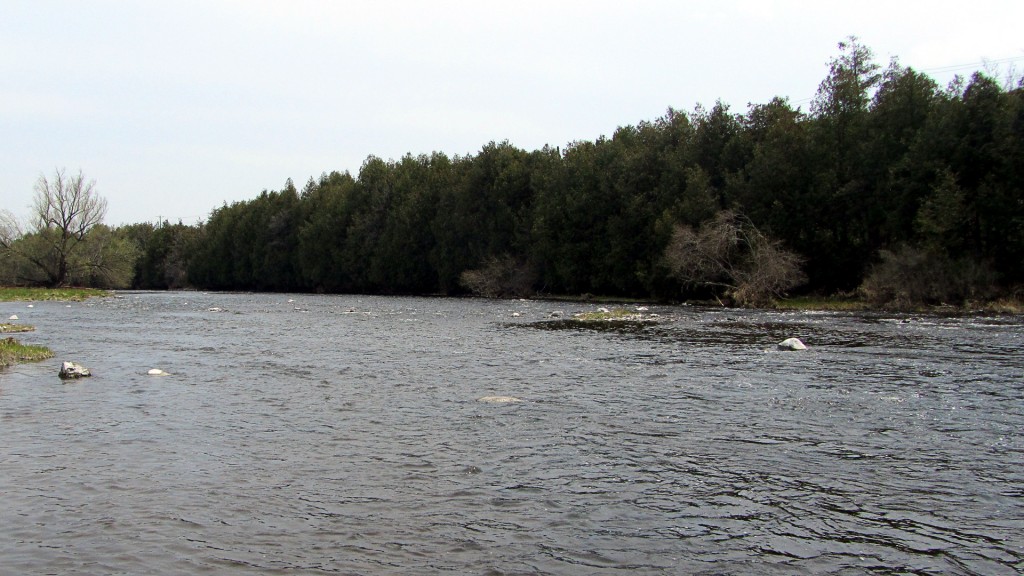 Last week was a reminder of just how mysterious the Grand River can be. It varies between one of the easiest and most difficult rivers to fish at times. I wonder how much of this has to do with it being a stocked river. I was actually watching In The Loop earlier this week and they were fishing stocked rivers and discussing how difficult they can sometimes be due to the different feeding habits and behaviours of stocked fish over wild fish. There are other factors at play on the Grand as well though, not the least of which is the fact that it’s a tailwater fishery and highly susceptible to the will of Shand Dam. At times like this though, I’m not sure whether to call it challenging, or impossible. There are some nearby freestone wild trout rivers that, while having much less dense trout populations and being quite challenging, are certainly more stable and predictable.

One angler that I talked to on the Grand guessed that the problem was a lack of food in the river: that perhaps the high flows had washed everything downstream. However, every rock I picked up was teeming with caddis larva. I couldn’t entice a strike with these nymphs in various styles, sizes and depths, nor with any other nymphs or streamers I had at my disposal. 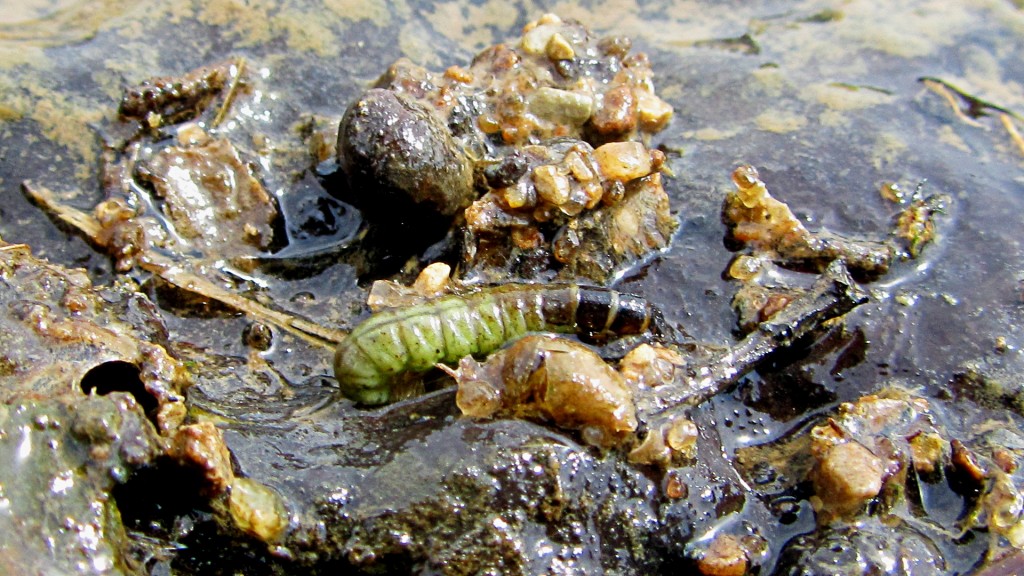 Caddis Larva like this were abundant, but the fish didn’t seem to be eating them

Thankfully, Brook Trout have been a bit more cooperative than the Browns, which is to be expected for this time of year I suppose. If you fly fish, I’m sure you’ve driven over your share share of bridges, wondering what the tiny streams and ditches below them might contain. Well, I finally decided to stop at one such bridge last week, after driving past it dozens of times prior. My gut feel had always been that this little stream likely wouldn’t contain much and would be a waste of time. 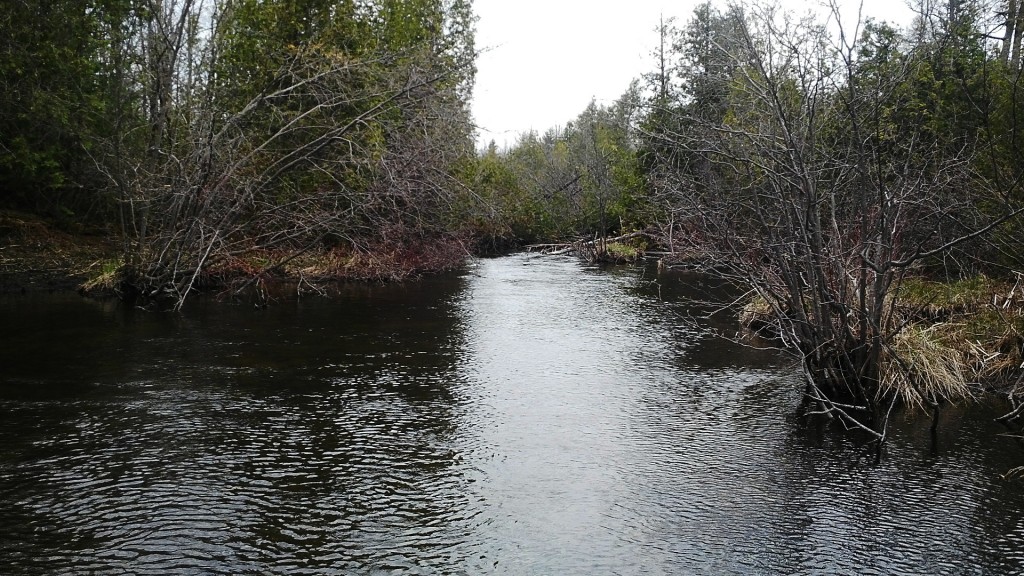 Before setting up my rod, I walked down to the little body of water to scout it out. It was crystal clear and quite shallow – I figured if there were any fish in there, I should be able to spot them. After a couple minutes of carefully sneaking around and being unable to see any signs of life, I headed back to the car and debated whether to fish. I decided that I aught to at least give it a try, otherwise I’d keep wondering every time I drove past it. I setup my 3 weight, grabbed a box of flies and tippet and headed back down to the stream.

Although it wasn’t dry fly season, I figured shallow water, small stream and brookies were a good enough combination to fish one anyway. Being careful to not spook any fish, I crouched a few feet back from the bank and began casting my trusty red humpy to the top of a decent looking run. There was little flow, so getting a good drift wasn’t a problem. After a number of drifts without any strikes, my hopes were beginning to sink. I moved a few steps downstream, took another cast and was startled when a nice sized fish slammed my dry fly. It’s not that the fish was all that large, but I was expecting at most a 5-6″ brookie, if anything at all. The fish I pulled in on this tiny stream with my 3 weight far exceeded my expectations! 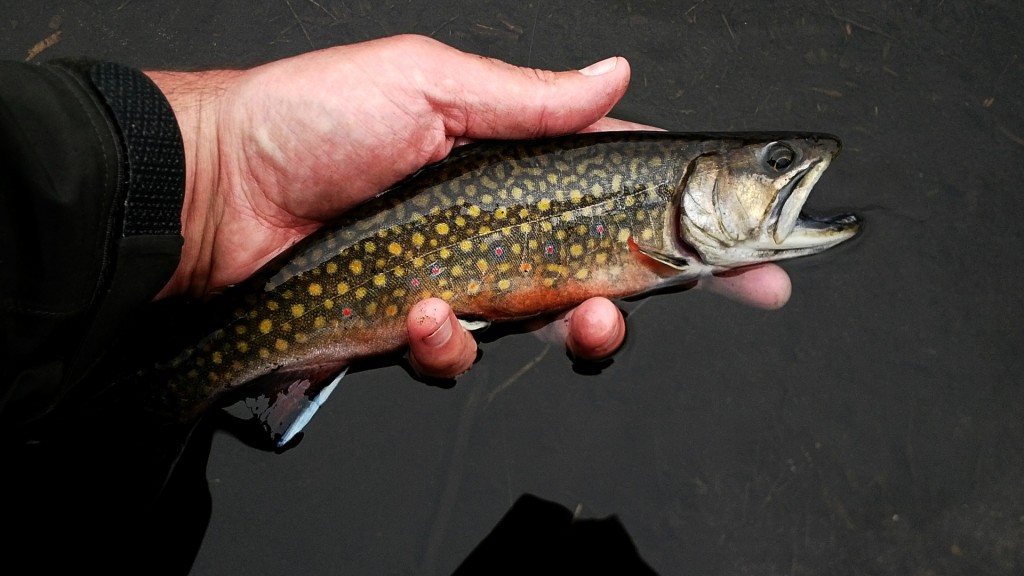 I’d never been so excited to catch a Brook Trout of this size. I spent the next couple hours exploring up and downstream, involving some serious bushwhacking – and hooking into a few more smaller brookies. Looking back, it seems inexplicable that I hadn’t stopped to fish this stream before. I don’t think I’ll be making the same mistake in the future. It’s so rewarding to find these types of little spots and figure them out all on your own. It certainly made up for my lacklustre fishing on the Grand.

The next week is filled with predictions of rain and thunderstorms, so unless the weather man is wrong again, there’s a good chance the Grand will be back in trouble. Might be a good time to hit some more small streams for Brookies, or to try out my new membership to Glen Haffy.