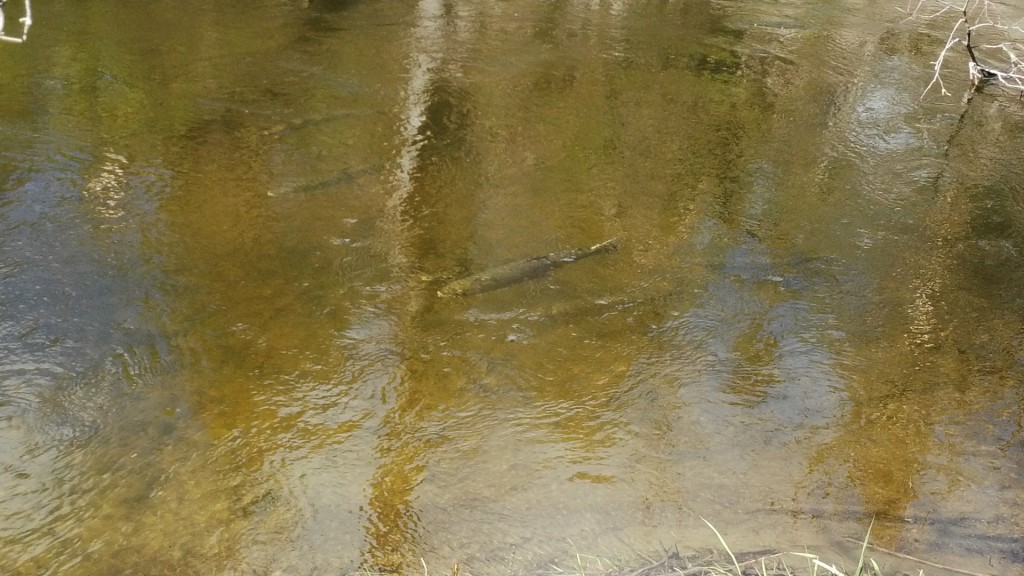 I started swinging size 6 buggers, but the fish didn’t seem interested. In addition to not enticing any strikes, I managed to spook the pool. I rested the water for a while until the fish moved back into a comfortable feeding mode. This time, I thought I’d go with a bolder piss them off type tactic and tied large fish skull zonker style streamer. Not something I would consider a typical fly for steelhead (but then, what do I know), it was actually the same fly I caught my 20″ brown with on opening day. After a few failed swings, I tried stripping it and hooked into my first fish!

Since I’d never caught a steelhead before, I didn’t really know what to expect. I was surprised at how fast I got it into my net, though after removing my fly it swiftly leapt out of the net and back into the water before I could snap a picture. In retrospect, while it fought harder than most of the browns I’d caught in the past, it wasn’t until my next several hookups that I realized it was an unusually gentle introduction to fighting steelhead.

My second fish came from the same pool a few minutes later, after switching to a Hares Ear when my streamer failed to produce any more hits. Watching my nymph drift downstream and seeing the entire take was pretty thrilling. I literally watched the fish open its jaws to inhale my offering. This fish put up a much better fight than the previous one, catching some serious air and skitting across the water as if it were water skiing. I managed to get a quick photo before releasing this one and by the dark colours I assume it had been in the river for quite a while. 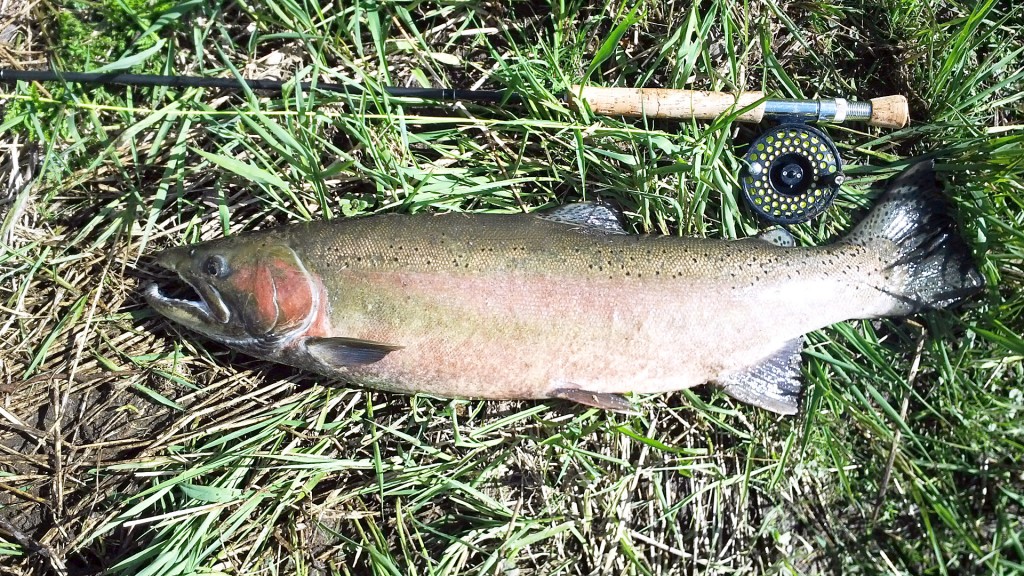 Over the next hour or two, I managed to hook into a total of six fish, the first two (including the one pictured above) being the only landed. The remaining four proceeded to show me just how much power this fish have and used their strength and acrobatic abilities to either shake my barbless hooks free or break me off under log jams.

To be honest, as much fun as this was, coming from a primarily resident trout fisherman, I almost felt like this was cheating. Being able to see the fish, the fly and the whole take was pretty intense, but it somehow didn’t feel as rewarding as hooking into a fish holding on the bottom of a deep, dark, mysterious pool. I’m certainly not complaining, it just didn’t feel as rewarding as it might have if I had to work harder for the fish.

A few days later, a buddy of mine from Windsor was heading up to Mississauga for several days of training. It worked out that I was off all week and he was able to allocate a big chunk of time for a couple days to get out and fish. Him being an avid steelhead angler and me being keen to mooch some of his knowledge and tactics, we decided to spend the first evening hunting steelhead on a section of the Credit River that neither of us had ever seen or fished before. It was nothing like the small river I fished days before as it was a much larger river here with enough stain to make spotting fish impossible.

When we arrived, one guy was leaving and there was only one other car parked at the access point. Considering the popularity of the lower and middle Credit during steelhead season, this didn’t give me a lot of hope – but we geared up and hit the river nonetheless. We walked along the river bank looking for promising looking water. For the most part, the river here was wide, shallow and even. There wasn’t much for fish structure or interesting river characteristics. It wasn’t until several of minutes of walking that we came to a slight bend in the river with some deeper looking runs and pools. With nobody else in sight, we stopped here to try our luck.

I hadn’t finished setting up my line back at the car, so as I stood on the side of the river tying a leader,  Eric stepped into the river and began fishing the water at the tail end of the pool. After what seemed like only 1 or 2 casts (he later corrected me that it was more like 20 or 30 and that I spend more time out of the water than in), I heard “FISH ON” and looked up to see Eric’s rod bent over. He hooked into a lively steelhead that had a few good leaps and runs before eventually being landed. I barely managed to get the fish into my net, which is fine for trout, but less than ideal for steelhead. 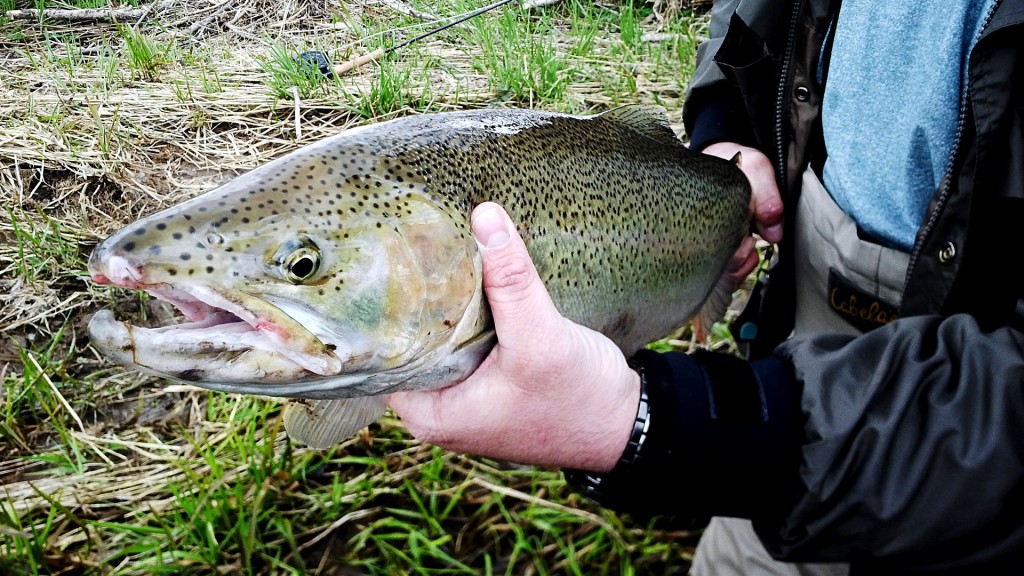 Steelhead landed by Eric – a promising start to the evening!

It was relieving to have hooked into (and landed) a fish so soon, as it removed a lot of the guesswork about whether or not fish were actually in this section of river. In my head, if we caught no more fish that night, we’d both leave happy knowing that Eric landed a steelhead in a new river and I found a nice pool close to home to return to.

As it turned out, with limited time remaining, that was the first and last steelhead we landed. I did manage to hook into one nice fish, which promptly snapped my 9 lb tippet as he smashed my streamer on the swing. It was an enormous take and a hard lesson learned. I might get away with such sloppy swings fishing for trout, but the amount of stress a steelhead puts on your line means you better have your rod positioned correctly during a swing to absorb the take and your drag better be set appropriately – mine was not. I had one other hit before the evening ended, but did not get a hook set.

All in all, this spring was a pretty positive intro to steelhead for me. The mystery behind it all seems to be slowly unravelling and I’m definitely more positive about it than I have been in the past. This was probably the last time I’ll be out for them this spring (back to my staple of resident browns and brookies), but I feel confident enough to want to be back on the river for more when they return in the fall.