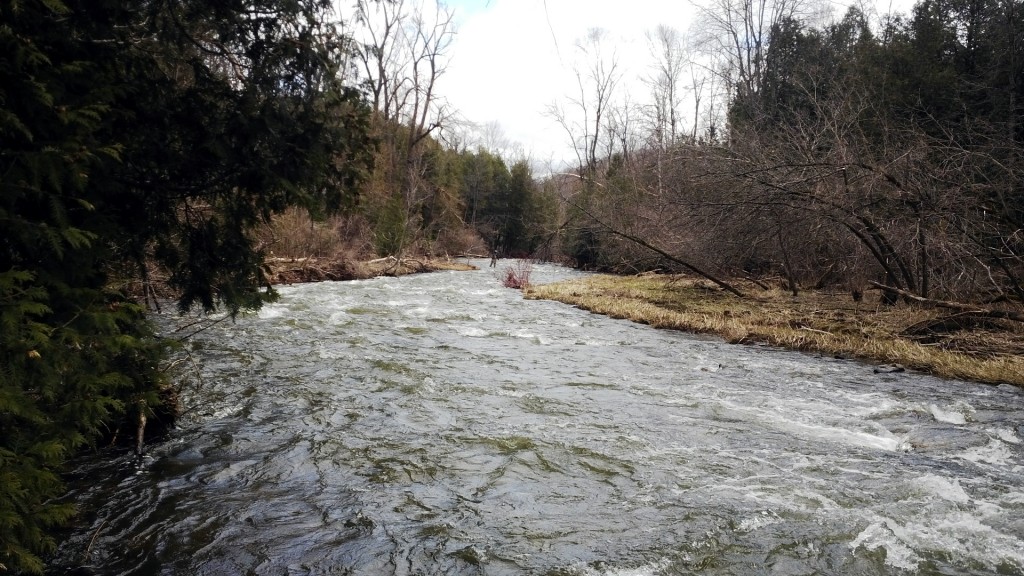 Several hours were spent Saturday fishing the clear, fast, high waters of my usual stomping grounds. We drove two cars, parked one several kilometres downstream of our starting location and spent a good number of hours enjoying a rather surprising amount of solitude on the river. Conditions were tough and we went nearly fish-less for a bulk of the day trying to adjust to the changed river. 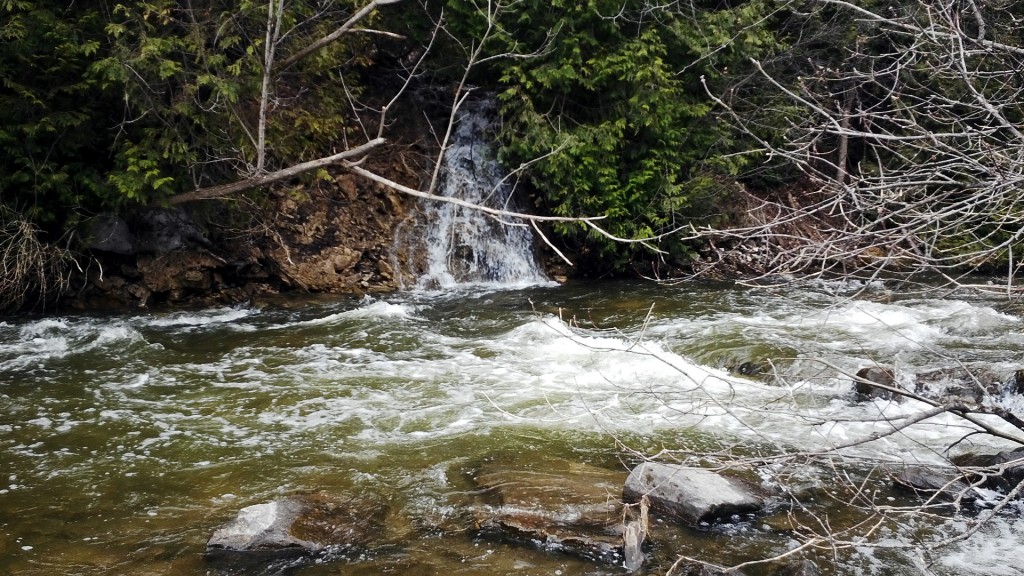 Normally a mere trickle, this tiny feeder stream had a good constant flow

Downed trees and branches from the winter (thanks largely to the big ice storm) had changed several holes. In fact, the very hole I lost the biggest fish of my life from on closing day last season has been completely destroyed by a couple downed trees. Thankfully, slow fishing aside, it was great to be out on the river and a nice Brown Trout finished off the day. The fish below slammed a size 2 rabbit strip fish skull streamer I had tied the night before, while stripping it downstream through a pool. 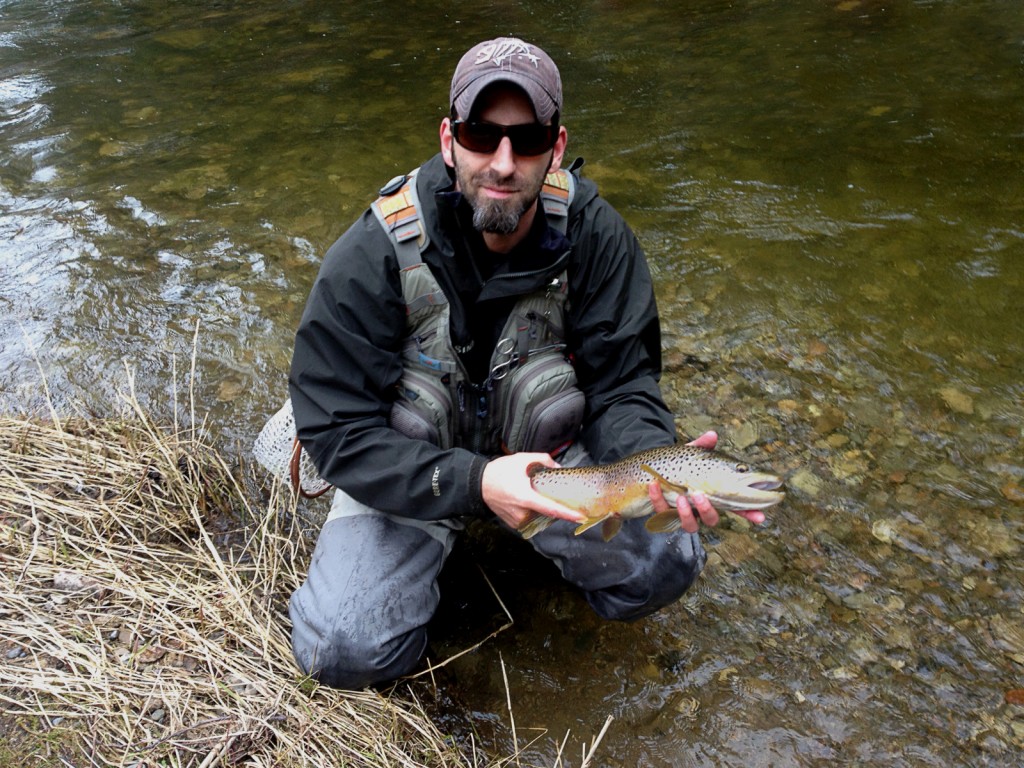 I went out solo on Sunday for a few hours in search of Brookies. The weather was slightly better than the previous day and once again I had the river to myself. I got off to a slow start with some small streamers and nymphs, but finally found my stride when I switched to a trusty Bead Head Pheasant Tail Soft Hackle. I fished it on the swing and hooked up with a good number of fish before calling it a day. They were all on the small side – most in the 5-8″ range, but Brookies are always a pleasure to catch so I certainly had nothing to complain about. 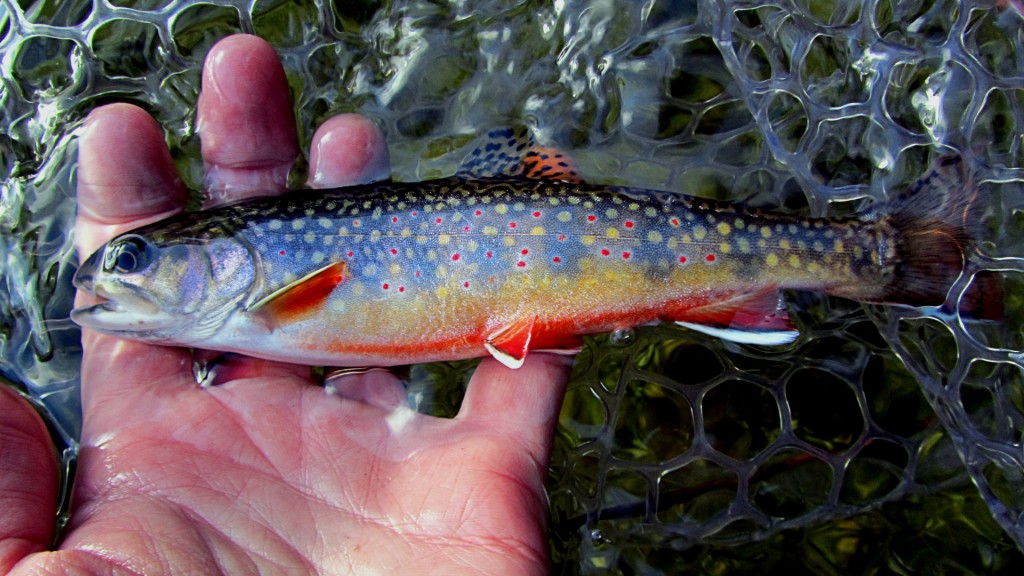 Small but pretty, it’s always a pleasure to catch colourful Brook Trout like this

When I got back to the car, I ran into a pair of fishermen who turned out to be two of the nicest people I’ve met on the river in years. Strangers to each other with a fairly large age gap (I’m guessing 20-30 years), they met about 20 years ago on the river and have been fishing together ever since. We chatted about our experiences opening weekend, years past, the state of the river and exchanged a few stories. This river, the one the MNR are planning to destroy, always seems to produce excellent stories and the most mannered of fly fishermen.

The Upper Grand was running at about 25 cms on Saturday, which is unsafe for fishing. It didn’t really affect my plans as I generally stay clear of the Grand on opening day (again, crowds), but I’m sure it spoiled the plans of countless other fly fishermen who bet on kicking off their season on this excellent river. Luckily, they did drop the river level down to about 5 cms Sunday afternoon, so it likely saw a huge surge of activity thereafter.

Unfortunately, this week has again been filled with more near-record-breaking rainfall, so the Grand is back to unfishable again. There’s more rain in the forecast for the remainder of the week, but I’m hopeful that it will slow down and give the rivers a bit of a break for the weekend. My wife is taking the kids to her parents’ place this weekend and leaving me behind to fish, so I want to take full advantage of this rare opportunity!