For most my fly fishing years, I have favoured the dry fly more than all other types of flies. My very first trout was taken on a dry fly, my most memorable days on the water involve dry flies and they produce arguably the most exciting takes from fish. I would typically rather prospect for trout with a dry fly than tie on a nymph or streamer, even when the fish are not rising. Considering most fish feed under the surface, this is a bit stubborn.

I’ve grown to appreciate the nymph and streamer for what they are and I certainly fish them more now than I did in the past: but still, I don’t enjoy them as much as I do fishing closer to the surface. Most trout fisherman generally consider these 3 types of flies: dries, nymphs and streamers. There’s also the more recent hybrid emerger, which is fished just under the surface flim, but these are what you’ll find predominantly in most fly shops and fly boxes. Yet, the sport of fly fishing grew up exclusively on another type of fly, one that is largely ignored by most anglers today: the wet fly.

I’m not stating anything ground breaking here. This subject has been brought up by lots of others, on the internet, in books and elsewhere. Speaking of which, I just received a copy of a new book, which is why this subject is fresh on my mind: 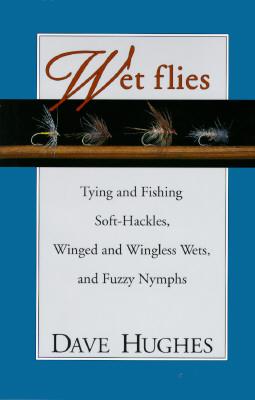 This is a ~200 page hardcover book with a nice blend of stories, techniques and wet fly recipies. I’m only a little ways into the book, but so far it’s a great read.

Last season I had a bit of a revelation, which is why I ordered this book and began tying and fishing more wet flies as the season progressed. On many of the rivers I fish, dry fly action is often limited to very specific times of day (if you’re lucky). Streamers are not the most effective in certain water or during the warmer days of summer and as mentioned, I’d just rather not tie on a nymph unless I must.

I happened to get lazy last season and let my fly box run near empty. While out on the river for an afternoon, I lost a couple flies in some tight tree cover and a few more flies were starting to look pretty beat up. As I searched my pathetic looking fly box for another fly to tie on, a royal coachman wet fly turned out to be the best looking fly in my box. This fly was given to me by my father-in-law years before as a nice gesture, inside one of those bargain fly combo containers. I’d never really used them, but since I was so low on flies I decided to bring them along just in case.

I was fishing downstream of a waterfall, in a narrow section of pocket water with very large boulders. I dangled my fly over a boulder into a small pool and to my surprise, I immediately pulled a trout out of it. I worked my way downstream and caught several more fish on that royal coachman wet, followed by a good number of fish on a black gnat wet (after the coachman had taken a good beating). It didn’t take me long to realize that I had been missing out on a really fun and effective way to catch trout, for far too long.

Long story short, I’ve made sure to carry wet flies with me on every outing since and my interest in fishing them has been growing. To me, they are the ultimate versatile fly. You can catch fish on them almost any time, regardless of where the fish are feeding and certainly when there are no fish rising. An added bonus is that fishing wet flies is a good option for young fly fisherman just getting introduced to the sport (i.e. my kids), since the “perfect drift” is not quite as important with them as it is with dry flies or nymphs.

I’m looking forward to reading the rest of this book and building my collection of wet flies up for the coming trout season, which is less than two months away now in southern Ontario!