Opening weekend can get pretty busy on the popular rivers, so as usual I spent it close to home on a small local stream. It just so happened that my son had a grade 2 project to finish over the weekend for their class’ NOBODY doll, which he was given for the week. If you haven’t heard of this thing, it’s basically a (very expensive) plain denim doll called NOBODY which is used as a learning tool. The idea is that each child is given the doll for a week and they are tasked with teaching it something, basically showing it how to be a good person and become somebody. My son had chose fishing as his topic (specifically, fishing conservation and regulations). In addition to his report, he needed some photos, so I took them both along to the stream and I explained the need for fishing seasons, special regulations, fishing licenses and a bunch of other topics. Here’s a shot of NOBODY taking a break after a learning session: 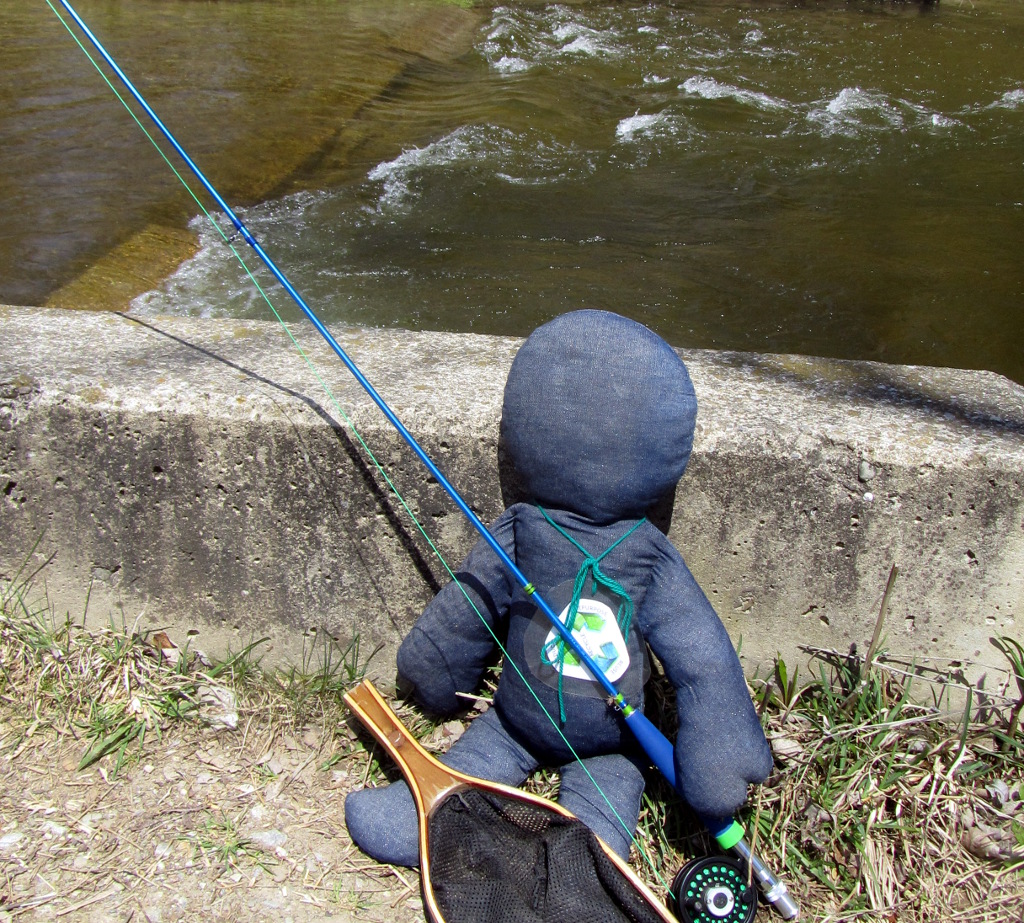 NOBODY, learning to fly fish

We did a little fishing, managed to hook into a few small browns and spotted couple big steelhead. The trout fishing isn’t spectacular on this stream, but it’s close to home, very picturesque in spots and virtually devoid other anglers.

I took the entire week off work, hoping to both do some fishing and also finish up some work around the house. As it turned out, the work part took more time than expected, leaving less time for fishing.

I did manage a trip to the Grand with a neighbour of mine who recently took up fly fishing. We arrived at the river around 5:15 pm: weather about as perfect as you could hope for. The chance of an excellent evening of fishing seemed quite good, though we fully expected to be fishing streamers and nymphs since the river is still cold at this time of year with little to nothing happening on the surface. As luck would have it, the Grand was both colder and lower than normal.

The water level on the Grand is generally dependent on Shand Dam at Belwood Lake, rather than on natural factors like most other rivers. We fished the upper river for about an hour and half without any action at all… no hits and no sign of fish. We decided to drive down to a lower stretch of the river where the water was usually a bit warmer and we were met with the same results. Between the two of us and countless fly patterns, we fished for 3.5 hours without as much as a hit – very strange indeed, especially for the Grand which is teeming with browns. We talked to few locals who all suffered the same fate. In fact, one of them had fished the Grand on three separate days that week without a single fish. Basically, the fish were completely shut down. My only guess is that the low temps and low (relatively clear) water levels were making the fish extremely spooky and unwilling to take a fly. What I do know is that this was the toughest fishing conditions I’ve probably ever seen on the Grand.

Apparently, some other rivers in the area (which we’d considered, but settled on the normally higher percentage Grand), had seen much better fishing conditions with warmer water and some hendricksons already starting to come off. Oh well, that’s the joy and uncertainty of early season fishing here. Still, an outing with no fish is better than no outing at all.