A couple days ago, I got out to do some stillwater fishing for rainbows before work. I joined a fly fishing club this year that has some spring fed ponds which boast populations of native brook trout and stocked rainbows. The club is normally opened a few months outside of regular trout season, which (in addition to the opportunity for decent stillwater trout fishing) was my main motivation for joining. Unfortunately, late ice kept the ponds closed until trout opener this year and I’ve been busy fishing rivers for resident trout – so this was my first time getting out to the ponds.

I left early (5:30 am) to ensure I’d have access to one of the few boats that are available for use. I was pretty surprised to find a couple others already on the water when I arrived at 6:15. I headed to a second pond that was still quiet and empty. It was as perfect a morning as they come and the water was like glass. It was refreshing to be out fishing without having to wear bulky waders and a vest/pack for once. 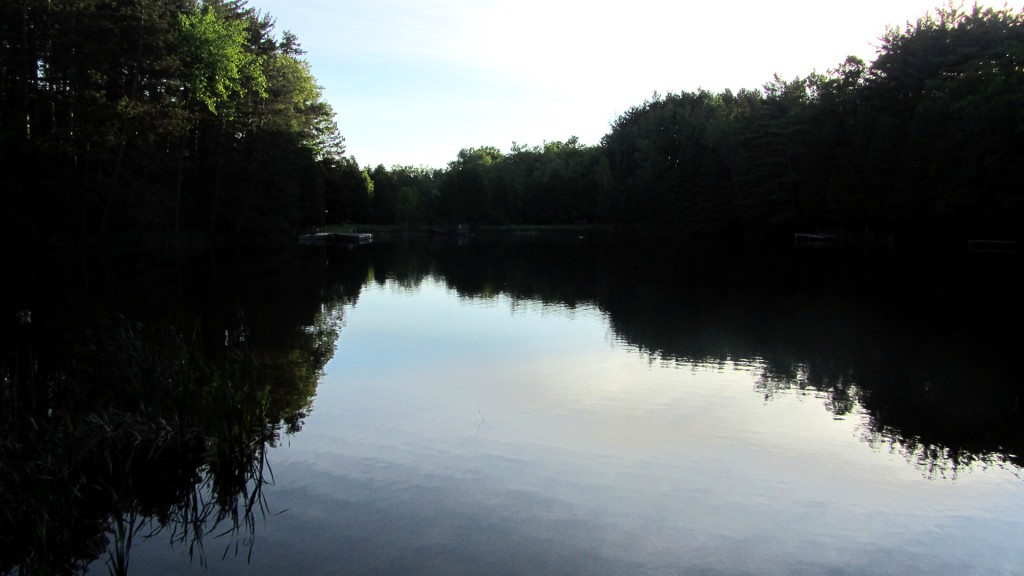 A quiet and peaceful morning on a trout pond.

I picked up a new 6 weight Sage VXP this season (which I got a great deal on) and decided to give it a try with some recently purchased sinking leaders. I’m new to the sinking leader thing and I’ve got to say, I’m in love with them. I picked up a couple 7ft 12lb RIO VersiLeaders @ 3.9 and 7 inches per second (ips), as well as a 10ft 24lb Airflo PolyLeader @ 6.1ips. Attaching these leaders via a looped connection to your floating line is an excellent way to fish deep with streamers, without needing a second spool of sinking line or having to add split shot. I found it extremely easy to fish streamers anywhere from a foot beneath the surface to 10+ feet down.

So, most of the morning was spent fishing streamers on sink tips and there was no shortage of action. I landed 6+ rainbows on Woolly Buggers and Mickey Finns, with several more lost. 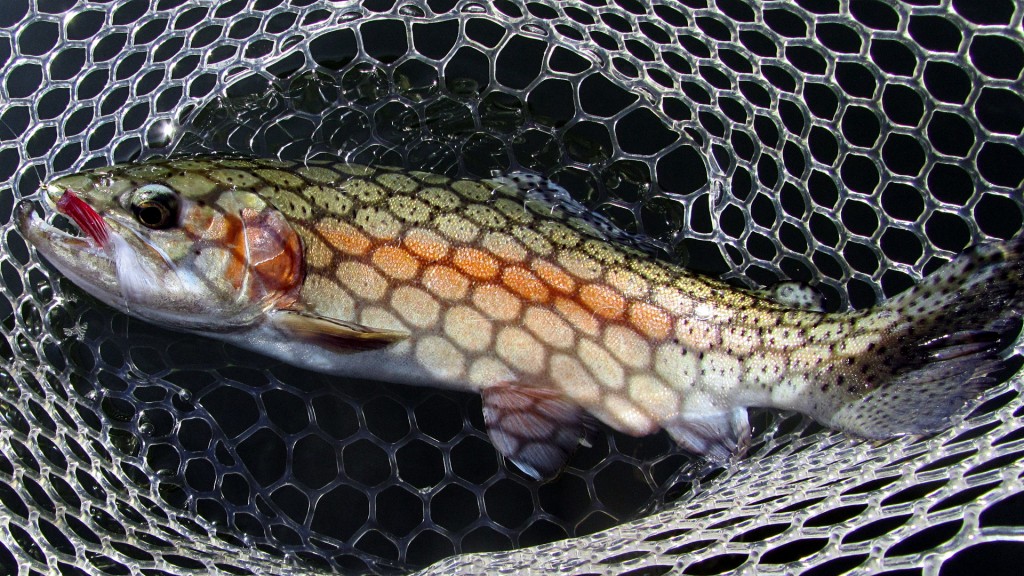 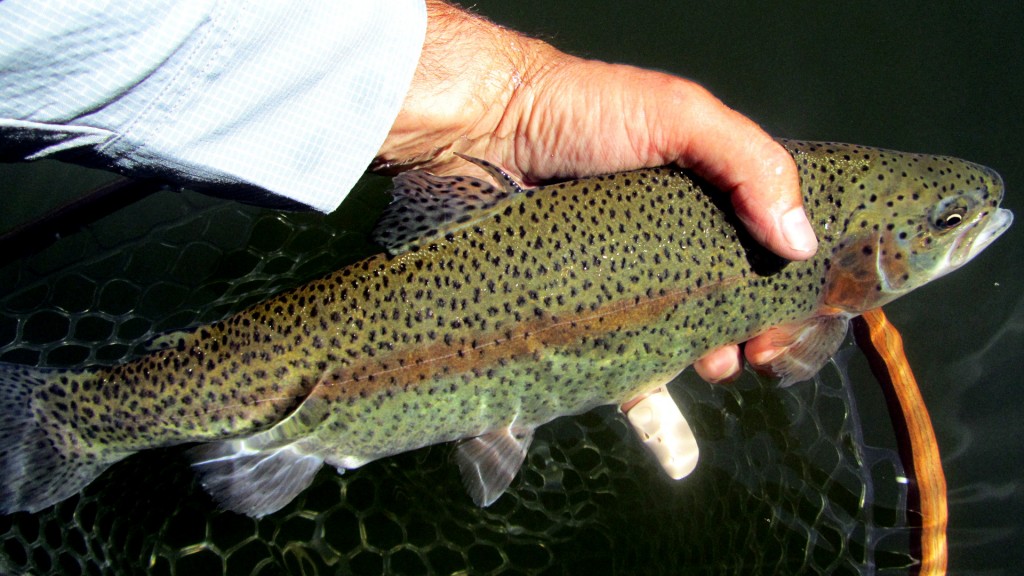 Another nice average sized rainbow caught on a streamer.

As the morning progressed, a few fish began rising. I wasn’t sure what they were eating and for all I knew the rises could have simply been fish chasing minnows. The important thing is, some of them were looking up and I imagined it didn’t matter much what pattern I chose. I settled on something big and bushy: a size 10 stimulator, for no other reason than it would float well and I could twitch it to imitate any kind of big insect on the surface. To my surprise, the very first cast triggered the biggest rainbow of the day. 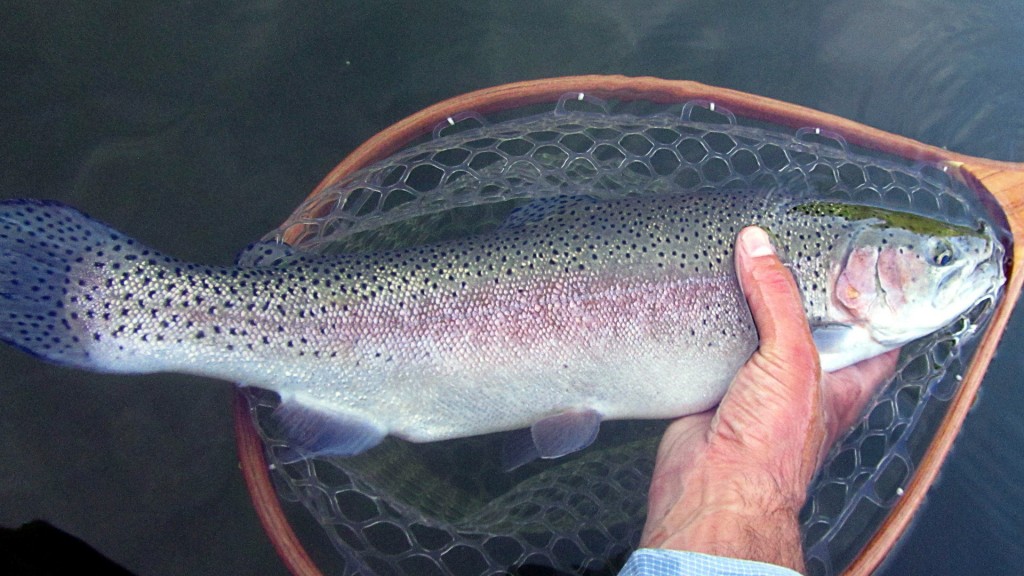 A large rainbow that slammed a simulator twitched on the surface.

Although I did manage to entice a few more rises with the dry fly, it turned out to be less reliable than streamers. I switched back to my sink tip and fished woolly buggers for another hour or so before packing up and heading to work. It sure is nice to have the flexible hours that I do, but I definitely paid for it that day as I struggled to stay awake at my desk. There’s nothing like waking up at 5:15 and spending 4-5 hours on the water in the sun to tire you out!