June turned out to be a busy month both on the water and on the fly tying bench. The rivers are now teeming with bug activity and you just never know when that epic day on the water might arrive… where everything comes together to produce those perfect conditions that bring even the most wary of trout to the surface.

This is the time of year where our fly boxes need to be the most diverse. Depending on the time of day, river and hatches, you might be casting streamers, nymphs, wet flies, emergers, tiny dries, large dries, or even huge topwater patterns. Consequently, I’ve been hitting the tying bench a lot lately, trying to cover all my bases. In what has been an increasing trend of mine, I’ve concentrated more on sub-surface patterns this season to up my odds when fish are either not rising, or when they’re rising but refusing dry flies. Below are some flies I’ve been tying and fishing on some of my local waters.

If you fish the Grand River, you know how frustrating it can be if you rely on dry flies to match the hatch. Although I don’t spend as much time on the Grand as I do other rivers, I’ve come to realize that it’s a largely sub surface and emerger river. In response to this, I tied a bunch of the following emerger patters in various sizes, mainly for caddis and blue winged olive hatches. I’m sure that by simply swapping out different colors and materials, these could be used to imitate a much wider variety of caddis and mayflies. 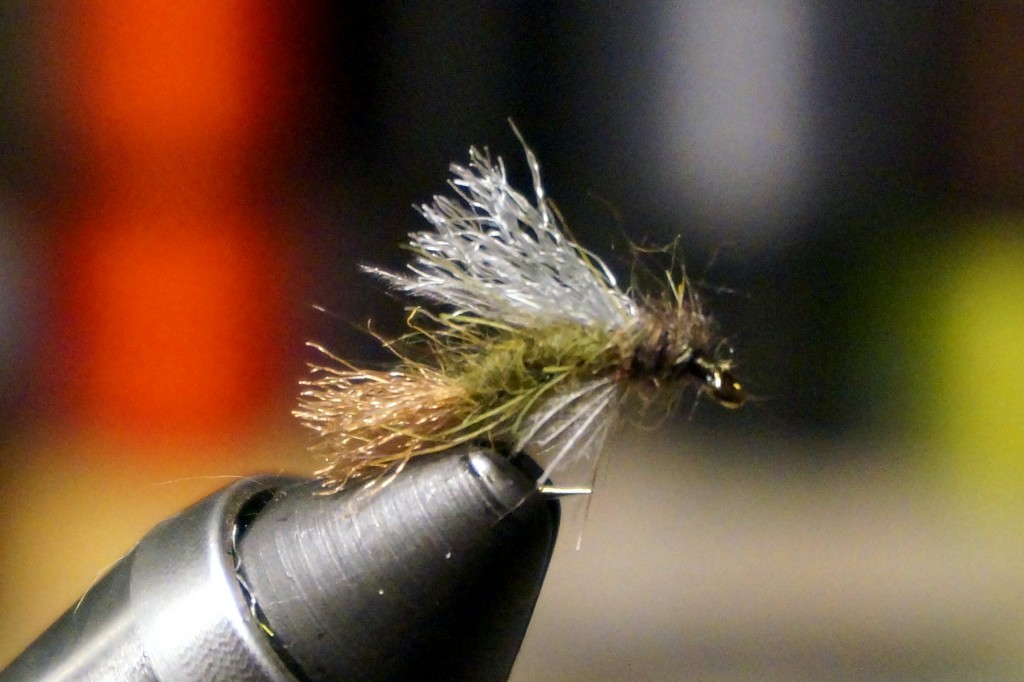 Caddis or BWO emerger, loosely based off a Snowshoe Emerger pattern 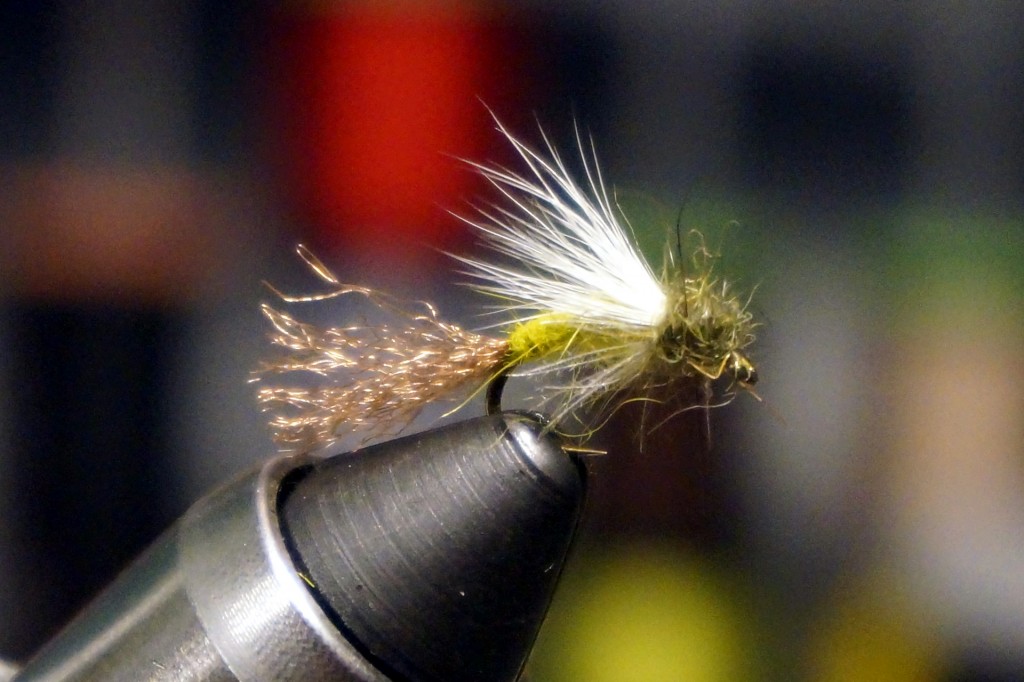 A variation of the above fly, tied with slightly different materials and colors 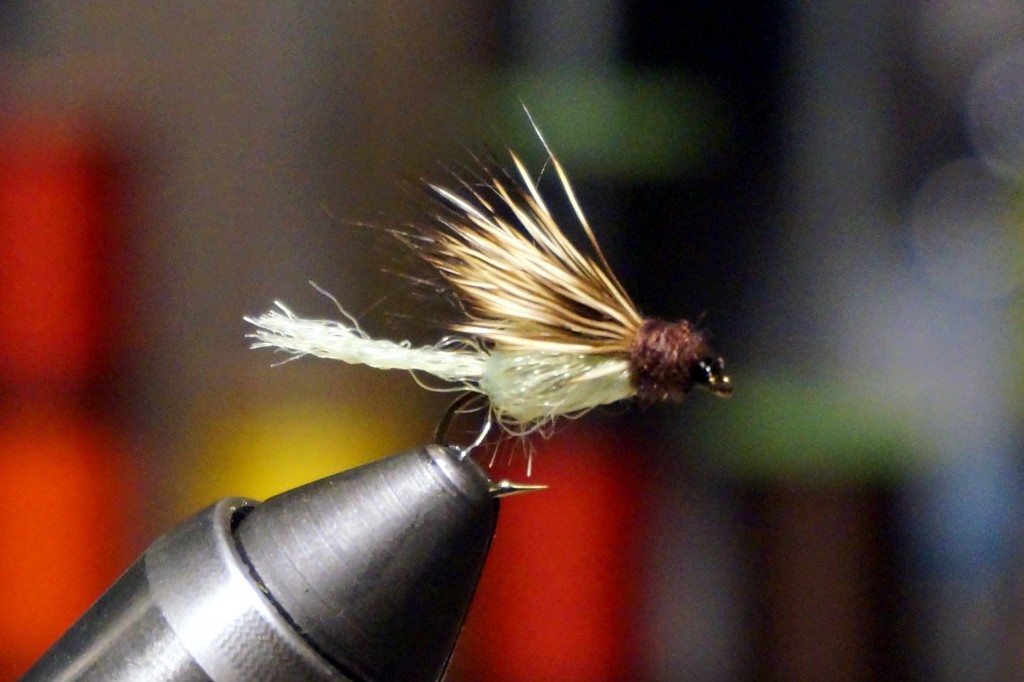 A sparkle caddis pupa emerger, which (in various styles) has done well on the Grand 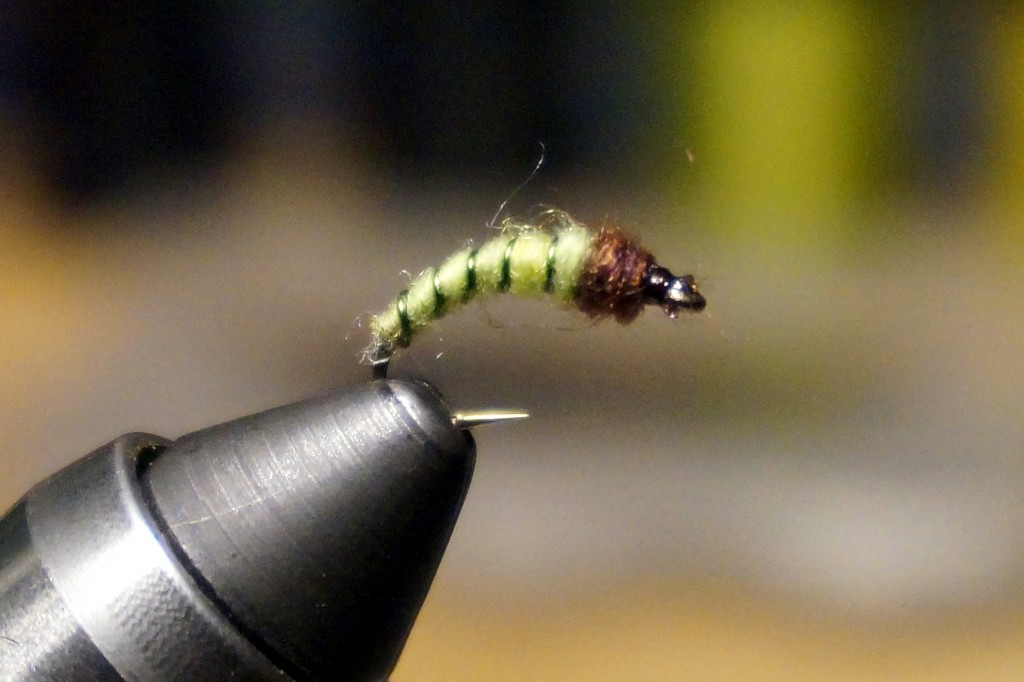 Caddis pupa nymph: one of the simplest, yet most effective sub-surface flies on the Grand

As a reminder of just how versatile you need to be, I set out to the Grand River last Saturday with a friend and a bunch of the above flies. The weather was perfect, flows were low and there had been no rain for many days prior. Our expectations were high: clear conditions, lots of bugs and rising trout. We spent a total of about 12 hours on the water that day and what we were met with instead was very murky, low-visibility water and not a single witnessed fish rise for the entire day (on the upper and mid stretches). We fished during one of the thickest caddis hatches I’d seen in quite some time, with loads of large caddis floating down the river and fluttering helplessly on the surface – yet we didn’t see a single fish come up. It wasn’t until we drove several kilometers downstream to the lower river (which usually has less visibility than the upper) that the water cleared up and we got into some rising fish. I later learned that the water clarity issues were caused by the first big algae bloom of the year.

I was on the Credit after work a couple weeks ago and managed to hit a smorgasbord of hatch activity, with Sulphurs, Isonychia and Caddis all in good numbers. Despite the impressive hatches, fish activity was surprisingly average that evening. I saw and caught a few small fish that were rising, but nothing out of the ordinary. The point is, it takes more than nice weather and lots of bugs to reliably bring up larger trout. I’ve fished many smaller hatches on the Credit in the recent past, with much more (and bigger) fish. I specifically remember an evening a couple years ago at the busiest access point on the river (normally the least-productive fishing) where an Isonychia hatch brought numerous 12-16″ browns to the surface in a feeding frenzy.

For the Credit, I find matching the hatch is generally less of a factor than the Grand. More important on the Credit is presentation and stealth. This isn’t surprising considering the greater angling pressure on the Grand and much smaller, technical water of the Credit. If you’re fishing dry flies, you can usually pick a common food source such as an Isonychia, Stonefly or simply use an attractor. Personally, I like bushy dry flies here, unless there’s a prolific hatch going on: a Stimulator or Humpy are two of my favorites. My only gripe with the humpy is that it can be annoyingly difficult to tie. 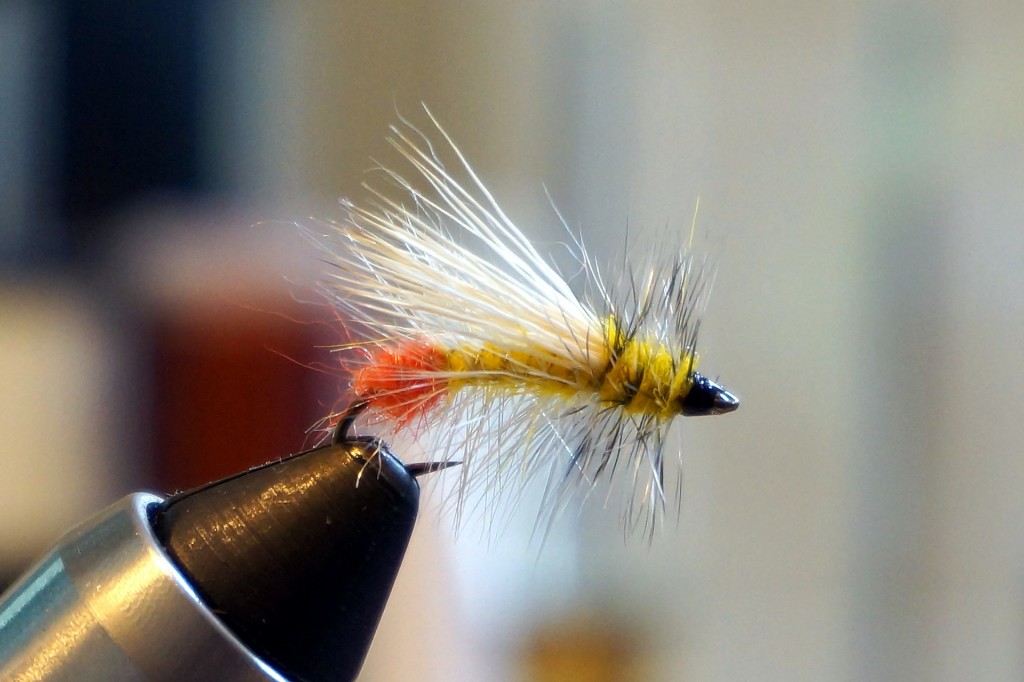 Stimulator: One of my favorite and most productive dry flies for the Credit River 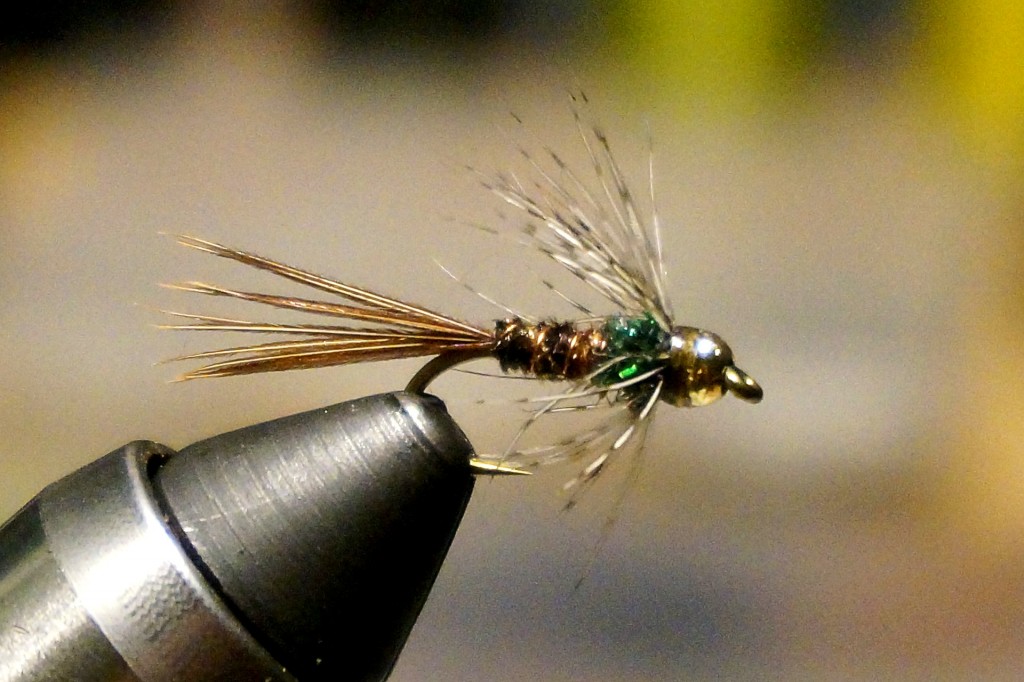 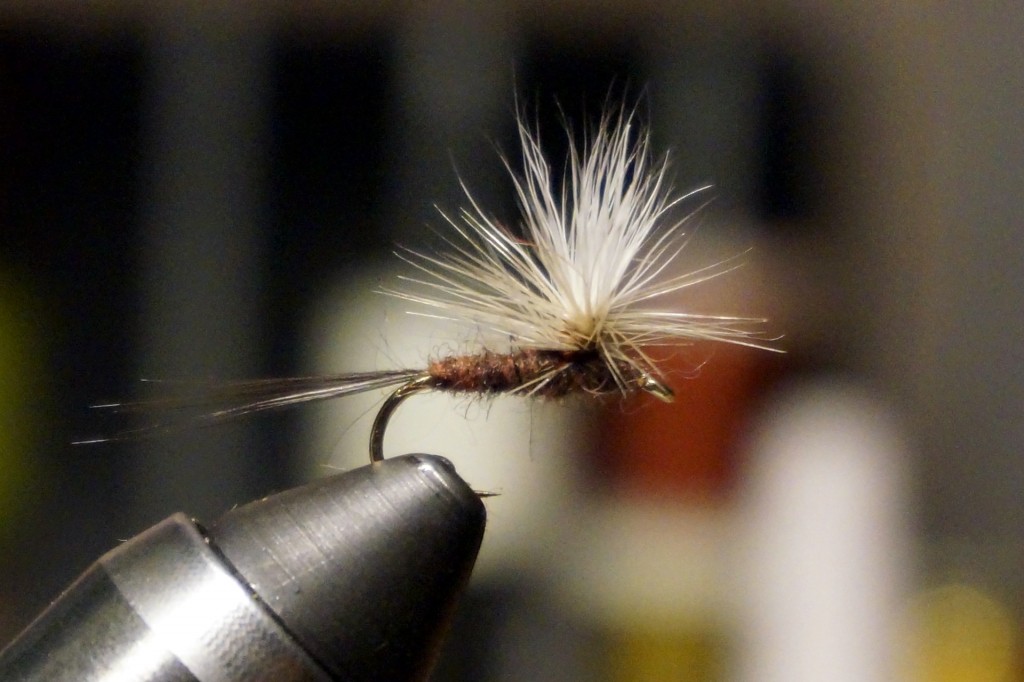 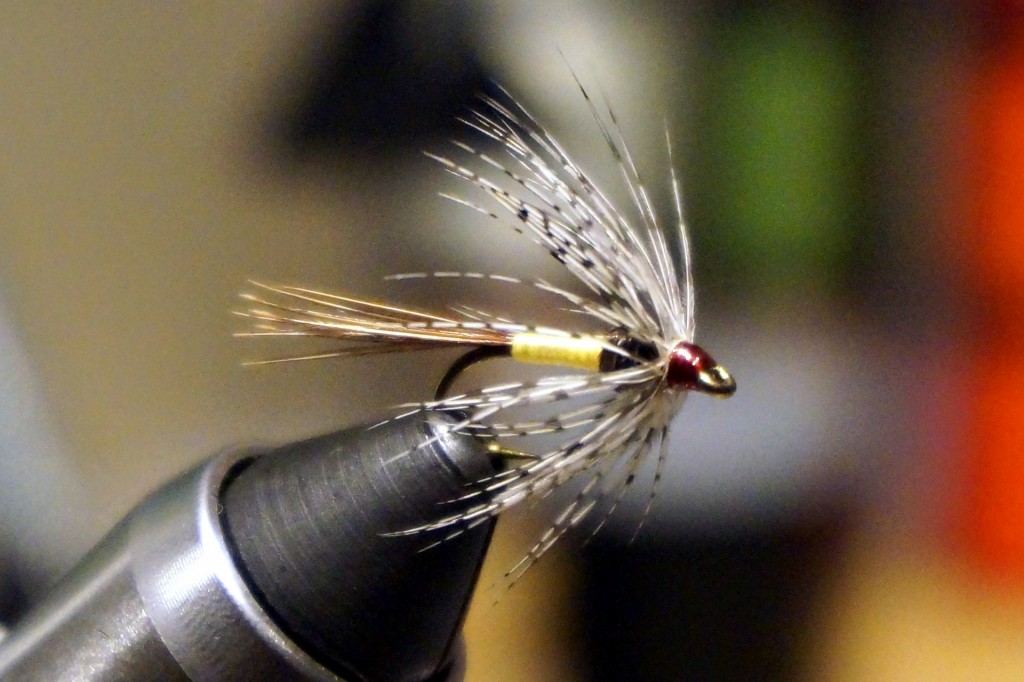 A Sulphur soft hackle, effective when sulphurs are out or as a searching pattern 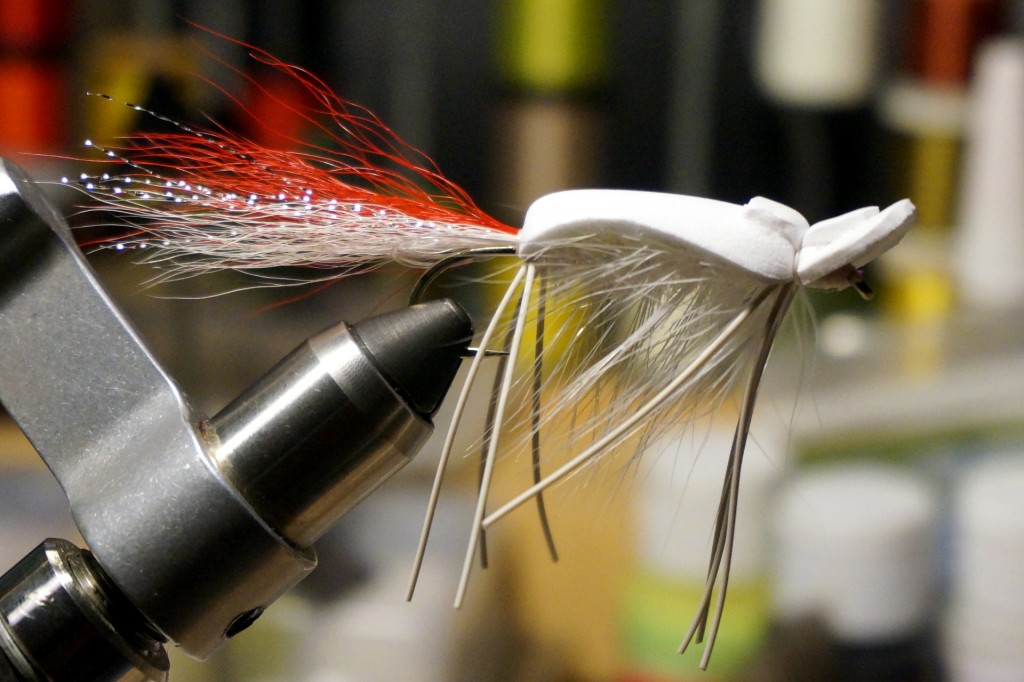 Gurgler: One of my go-to night patterns that I tie in various styles and colors

If I had to fish the Credit with only two flies, the Stimulator and Bead Head Soft Hackle Pheasant Tail would probably be my choices. As mentioned though, I think fly choice is more a matter of personal preference here. I have no doubt that a good Isonychia nymph or simple Walt’s Worm would do equally as well (if not better).

My experience with stillwater fly fishing is laregly limitted to local stocked water, with the exception of some native brookies and warm water species. Still, I’ve done some experimenting and found a few options that work well for me. I highly recommend checking out the various videos and articles by fellow Canadians Phil Rowley and Brian Chan, who are highly regarded as experts in this area. They’ll tell you that fly selection is much less important than tactics and this has definitely held true for me. Still, its nice to have a few patterns that have proven to be effective.

Slow retrieved nymphs and chironomids are known to be some of the most productive flies, but I’ve found more actively retrieved streamers to be a good all around choice as well – not just for trout, but also for bass and other species. 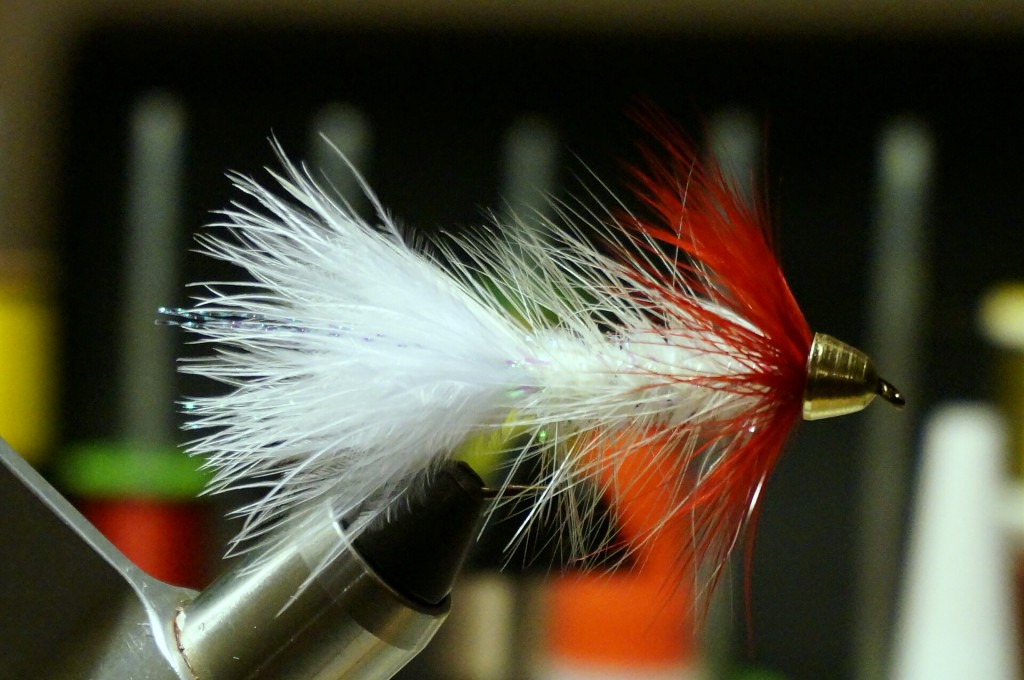 Redneck Bugger (as I call it): A crystal bugger with a red hackle neck 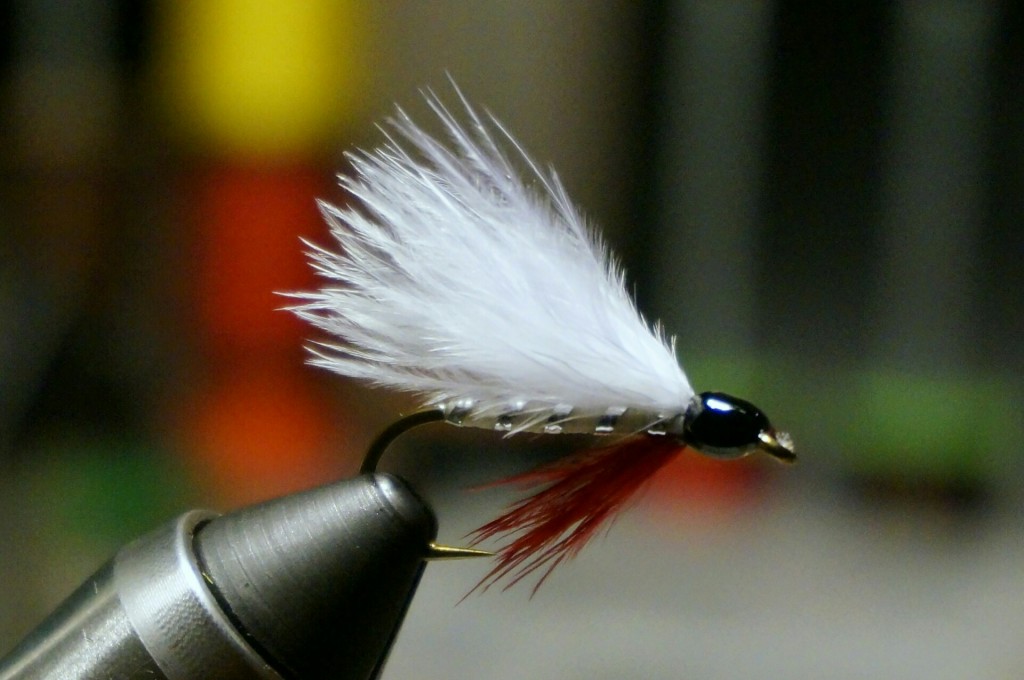 CB Stocker: Another simple and effective streamer for trout

The above streamers are easy to tie and have worked well for me for both stocked rainbows and smallmouth bass (for the latter, especially the bugger). On days when fish are rising and sometimes even when there are no visible rises, such as warm days when the water is extremely calm, I’ve had a lot of success with a Stimulator. This versatile fly (shown above) can represent a host of different insects: from stoneflies to caddis to hoppers. It also floats extremely well and can be twitched on the surface to entice a strike.

I dont know if it’s just me though, but it seems that irregardlesss of preparations and fly boxes full of favourite patterns, more often than not I end up on the river feeling as though I’m missing some critical fly. This keeps my vise busy and shopping cart full with new tying materials.