If you follow my blog, you probably know that the special regulations trout waters of the upper Credit River have been host to the occasional Northern Pike. These toothy fish have continued to escape from Island Lake on a regular basis, but I’ve noticed my catch rates steadily increasing in more recent years. It’s possible that my findings are inconsequential and due to either (bad) luck or an increase in targeting big fish. Whatever the reason, it’s somewhat disturbing knowing how many Pike are lurking in the deeper holes of the Credit.

Not too long ago, I was out on the Credit for the last couple hours of daylight. The weather was decent and I had hoped to have a run-in with either some Isonychia or some leftover Hexagenia. I encountered a decent hatch of the latter on some Brook Trout water a few days prior, but hadn’t had the luxury of fishing them to Browns yet this year. 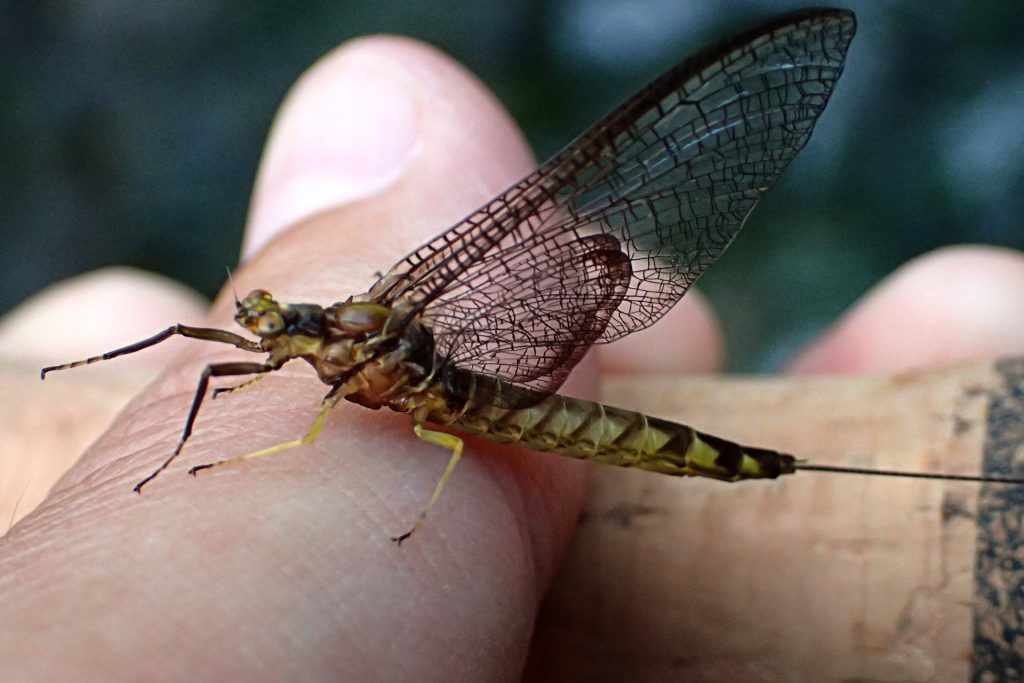 A Hexagenia Atrocaudata spinner from a few days prior.

The second half of the season has been far less rewarding than the first half on the bug front, most likely due to the extreme drought and heat. This outing was met with much of the same – a few tiny Blue Winged Olives and the very odd Isonychia fluttering about. I fished upstream without much success, using the only Isonychia I had on-hand: an experiment I tied in a hurry just before leaving. I had the misfortune of catching a couple small Atlantics on it, followed by a slightly more rewarding small Brown Trout. 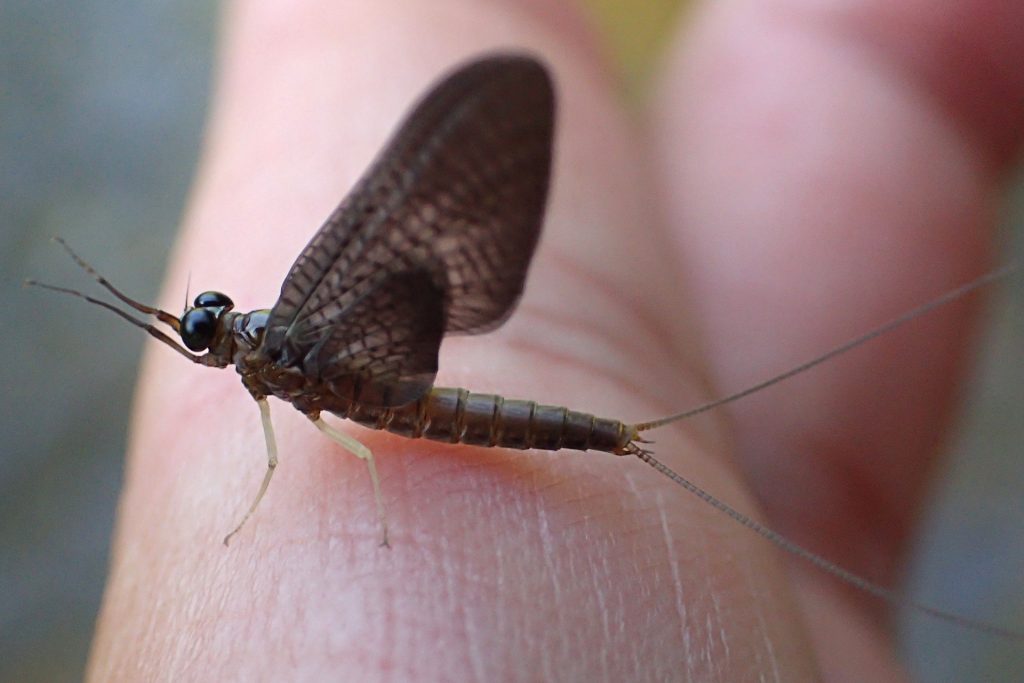 A small, lonely Isonychia Dun on a mostly bug-free evening. 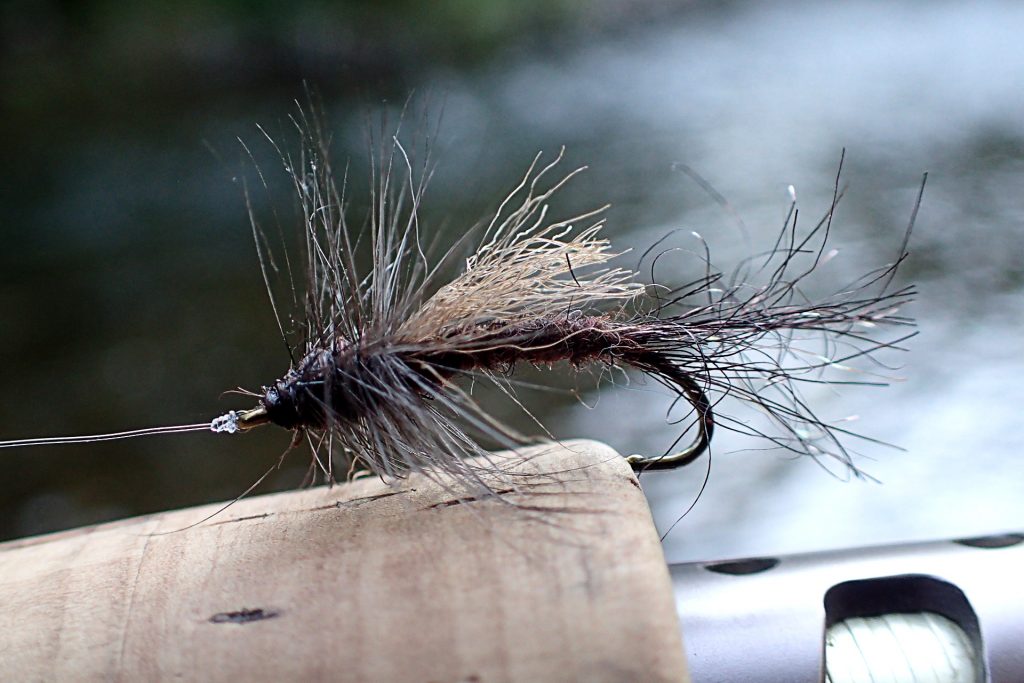 A simple Isonychia, tied in a hurry with whatever materials I had lying around.

As I approached a nice bend in the river that I hadn’t fished yet this year, I recalled the Pike I had caught in the same spot a couple years prior. It was memorable back then, due to the fact that it was the first Pike I’d actually caught on the Credit and it escaped my buddy’s net before we could remove it. I promptly returned a day or two later and fished it out of there. Ever since that, I’ve associated this pool with the Pike and I believe it explained my previous lackluster fishing there. At any rate, I was excited to see if any nice Browns had moved in since. 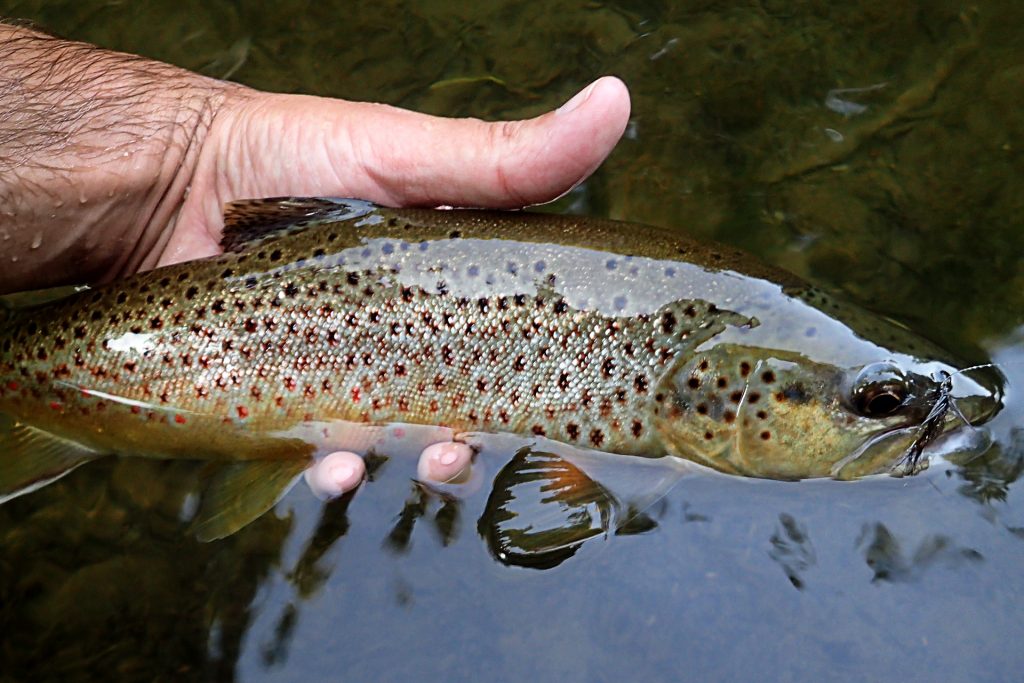 A nice Credit River Brown Trout taken on an Isonychia.

After releasing the fish, I carefully made my way along the edge of the river to a spot above the pool. I fished a couple pockets upstream for a few minutes to rest the pool before getting back into position. Even in the low water, the middle of the pool was deep and dark. My faith in the ability of the Isonychia to bring up a large fish dwindled, especially given the lack of bugs on the water. So, I did what any greedy fly fisherman hoping to catch a big trout would do… I tied on a large articulated streamer: a version of Kelly Galloup’s Sex Dungeon.

I covered the hole carefully, adjusting my retrieves and anticipating the strike of a large trout. Several passes through the fishiest section of the pool (a seam along the deepest section, between a large rock and a back eddy) failed to produce a fish. I rarely expect to catch a fish using these methods, but for some reason I was genuinely perplexed this time. I felt there had to be at least a couple big trout down there that hadn’t been fished to in a while.

At the rear of the back eddy, the water crawled to a stop and it appeared to be quite shallow. Having not covered that water yet, I decided to give it a try. On the first cast, in between strips, I felt something nick my fly. Unsure whether it was a fish or a rock, I stripped again and realized there was no longer any weight at the end of my line. My streamer was gone and all that was left was the cut end of my 2X tippet.

I honestly wasn’t sure what happened… I had barely felt anything, but I was mid-strip when it happened. In the back of my mind I thought Pike, but it seemed like a long shot since I had previously removed a Pike from the same hole and had just caught a nice Brown beforehand. Also, as lucky as I might be, I had yet to have a Pike cut my tippet on the Credit. The few that I caught in the past were all successfully hooked on 4X-0X tippet, with no incidents. So instead, I leaned towards the idea of having cut my line on something under the water, such as a sharp rock or pipe. Or perhaps I was simply careless when I tied on my streamer. Just in case, I cut off my 2X, went down to 0X then tied on another S. Dungeon.

Only a few casts later and I was met with the same fate, in the same spot. Again I barely felt a nick of the line before it was cut. This time however, the cut was not so clean and I was left with a much more jagged end to my tippet. There was no longer any question… this was the work of Jaws and my best guess was that it was very large and very hungry.

Having lost my last articulated streamer and not having any Pike leader material on hand, I remained determined to rid the Credit of the fish. Once again, I cut off more tippet (leaving essentially the butt section of my leader) and tied on a large lead-eyed bugger. As I mentioned, I was lucky enough to have never been broke off by a Pike on the Credit before, so I was highly confident that if I could hook it one more time, odds were with me that I would land it. Except, I did hook into it one more time – and I didn’t land it…

After losing a solid hour’s worth of tied flies, most of my leader and my entire ego, I started walking back to my truck with my tail between my legs. I’d given up for the time being, but I would be back with a vengeance the following night.

The next day was Monday, the Civic Holiday in Canada. Nothing was open and I was still without any Pike leaders or wire bite. After asking around and being unable to locate any, I began scavenging for something (anything) that I could use as a poor man’s Pike leader. I needed to re-tie a few streamers and that’s when it hit me. The flexible wire I use to tie articulated streamers would work just fine. I got to work, tying a couple leaders as well as a couple S. Dungeons to go with them. 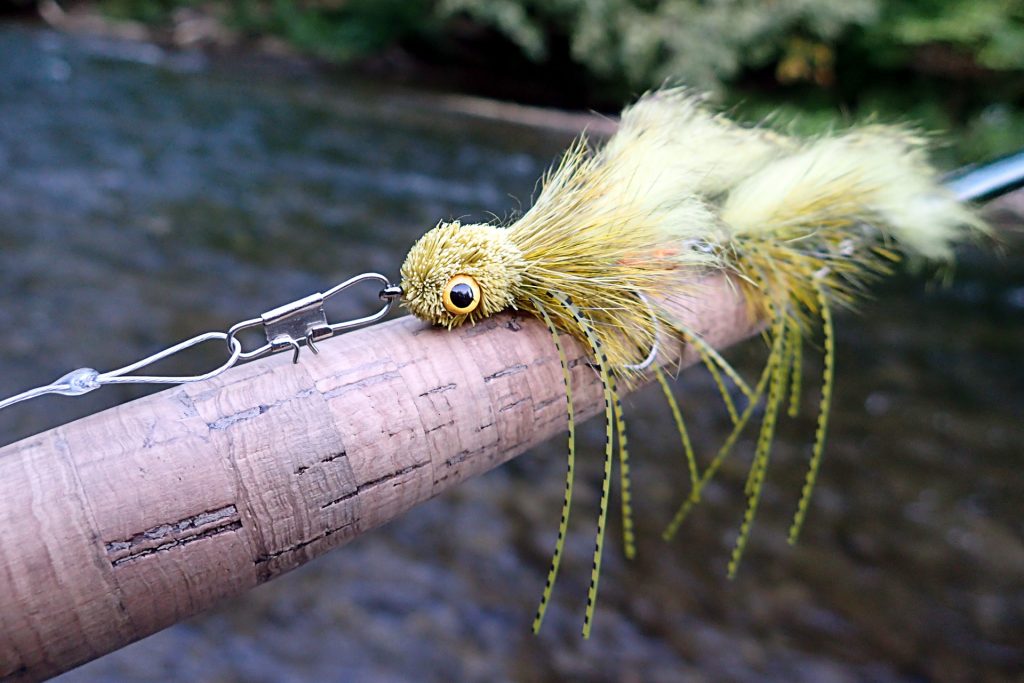 A homemade Pike leader and a freshly tied Sex Dungeon, ready for revenge.

I arrived at the pool around 6:30 pm. Given the the fact that the Pike had broken off three large streamers the night before, I fully accepted the possibility that it may have completely inhaled at least a couple of those – rendering it either dead, or with a serious lack of appetite. I expected it to come easy, but it took a solid 45 minutes of casting before I finally hooked into a Pike in the same spot I’d been broken off the previous night. My Macgyver’d leader held up perfectly and I succeeded in landing the fish this time. 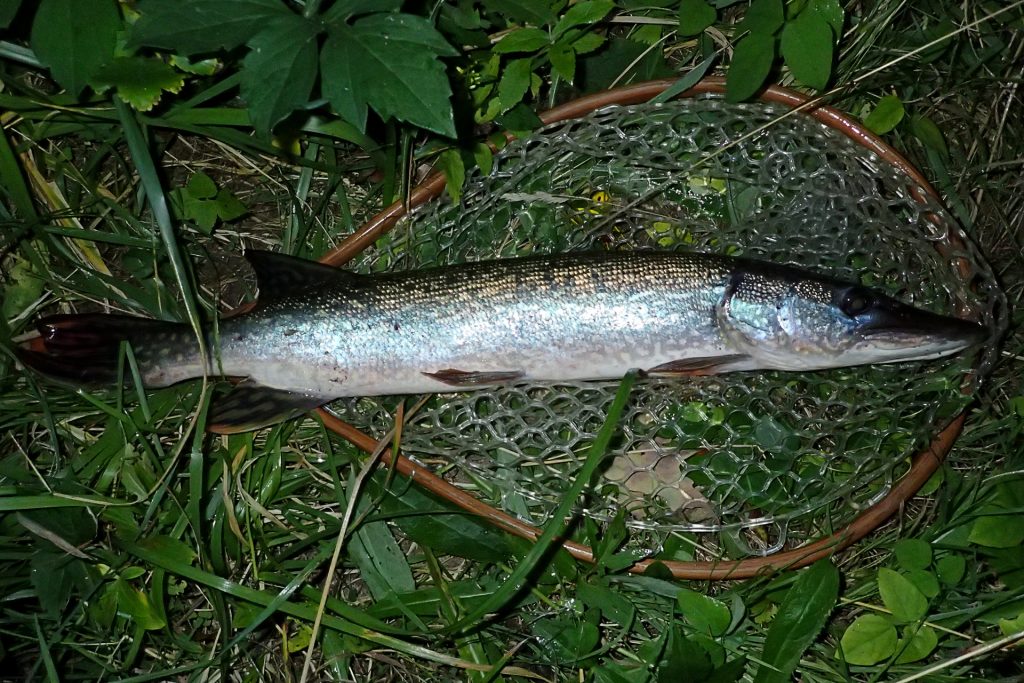 Vengeance: Yet another trout-eating Pike.

The only problem, or so I felt… this fish was considerably smaller than what I had imagined. I looked for hook marks or any other visible sign of being hooked three times last night, but couldn’t find any. That said, I was using barbless hooks and its entirely possible that they slid out or didn’t hook it in the first place. Or maybe there’s another, bigger Pike, still camping that poor hole. Whatever the case, I’ve decided that this pool will henceforth be known as Pike Pool (not to be confused with the similar sounding Pipe  Pool, as it is referred to by some regulars).