Last week was an odd one on the fishing front. It began with a drive down to Windsor to drop our kids off at their grandparents’ place for the week. Since I was only staying for one night, I thought it best to leave most of my fishing gear back at home. However, as their place is on the water, I packed one of my spinning rods along with the kids fishing stuff – I figured I’d be able to sneak at least a few casts in the evening. I brought only a single lure: a weedless frog, still in the package. The canal they live on weeds over pretty heavily in the summer and there are lots of bass to be caught if you have the right gear. 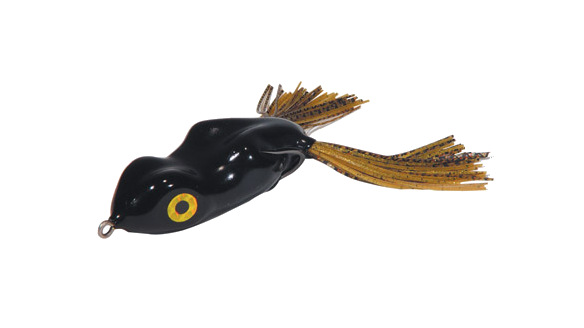 Not exactly for fly fishing: this “Scum Frog” was all I brought to Windsor to fish with

When my parents bought their place, I remember casting off the dock and catching almost nothing but northern pike. I don’t keep the fish I catch anyway, so the explosive strike and fight of a pike is (almost) always a welcome treat. For a number of years though, I think as the water level dropped and the weeds grew thicker in the summers, the pike gave way to almost exclusively largemouth bass and panfish. This past year though, they seemed to be back in slightly greater numbers, with the bass unsurprisingly in lesser numbers.

After dinner I decided to take a few casts and tied on the scum frog, which was still in its original package. As it turned out though, one cast is all I would get. As I twitched the lure across a thick clump of weeds, a large pike literally exploded out from under the mess, rising at least a full foot out of the water and splashing back down through the weeds. Before I could even process what had happened, the pike had completely inhaled the large weedless frog, cut my line with its razor sharp teeth and disappeared. In fact, it happened so fast that I won’t rule out the possibility of that fish being a musky, as they do inhabit the area. Whatever it was, it cut my fishing short that night and I was out a few bucks.

Fast forward a few days and my wife and I are back in Georgetown enjoying a week of vacation, kid-free. Not that I don’t thoroughly enjoy my kids – it’s just nice to be completely free of responsibility a couple times a decade! Mid-week, I set out to the upper Credit with my friend Ryan. We were fishing the new water I had discovered weeks prior, in some overcast and rainy weather. We worked our way through the same runs and pools that I mentioned in my last post, with only a couple fish caught between us. I was eager to arrive at the big pool that I’d got skunked in before… it was so fishy looking, there was just no way it didn’t hold some large fish.

Ryan was casting a dry fly up into the pool from below and I carefully snuck around and upstream of the pool so I could swing a large streamer through it. On the second or third swing, something BIG slammed it. I thought I’d caught one of the biggest trout of my life as it tore up the pool and worked the drag on my reel. Suffice it to say, I was pretty ecstatic and basically freaking out. However, although this is solely Brown and Brook Trout water, the fish felt different than other large trout I’ve caught in the past. A large trout will usually head shake and run either deep to the bottom, or into some structure, but this one was just out of control, running all over the place. As I got the fish closer to Ryan’s net, I got a quick glimpse of it as it splashed near the surface. In disbelief, I shouted: “Is that a f#@%ing Pike!?”. 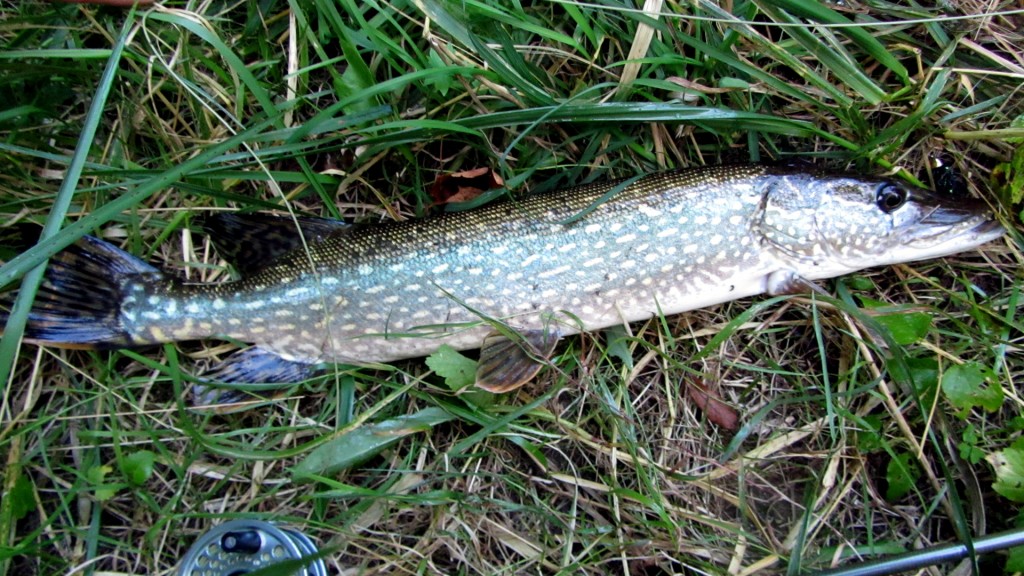 After netting it, Ryan carefully removed the streamer from the corner of its mouth and before we could even consider what we just caught, it slashed its way out of his hands and back into the pool from where it came.

I’ve been fishing the Credit for about 12 years and although I’ve heard stories of the odd Pike escaping into the Credit from Island Lake (upstream in Orangeville), I’d never seen one. It definitely explained why I hadn’t seen any trout in or near that hole yet and as soon as the fish escaped back into the pool, it dawned on me that I really should not have let that happen. Don’t get me wrong, I absolutely love Pike – I love to catch them and they are even good eating if you can clean and cook them properly. However, they have no place in the Upper Credit which is a protected trout-only fishery. There are enough pressures on the Brook Trout and Brown Trout there already – we don’t need a bunch of super aggressive and carnivorous Pike preying on them.

As a testament to just how aggressive these fish are, a couple days later I went back to the very same spot. In the back of my mind, I thought, maybe I can catch that pike again and get it out of that hole. Once again, on about the second cast, the same pike hit the same streamer. Like I said before, I don’t discriminate against Pike, but they have their place and this one won’t be eating any more Brookies or Browns.