In continuation of my last post about exploring new waters, I ventured out to yet another new section of an old river last week. This is another spot I’ve driven past many times, but never realized was accessible due to mostly private property and lack of parking. However, a long chat with a friendly fellow on the side of the river a while back tipped me off, so I decided to give it a try.

On my first visit, unknowing of what the river would hold, I decided to fish upstream. It was a warm, calm day and the river was fairly wide and shallow here, with some nice riffles and runs and lots of small boulders for fish to hold behind. Overall, the combination of easy wading and fairly easy casting and drifts was a welcome change. The main challenge here was presenting a fly upstream in the clear shallow water, where the fish were spooked extremely easily.

I hooked into two browns almost immediately, the first which I lost after it unexpectedly ran at me and I failed to keep enough tension on the line. The second was gently sipping bugs off the surface under a fallen tree before my yellow stimulator fooled it. 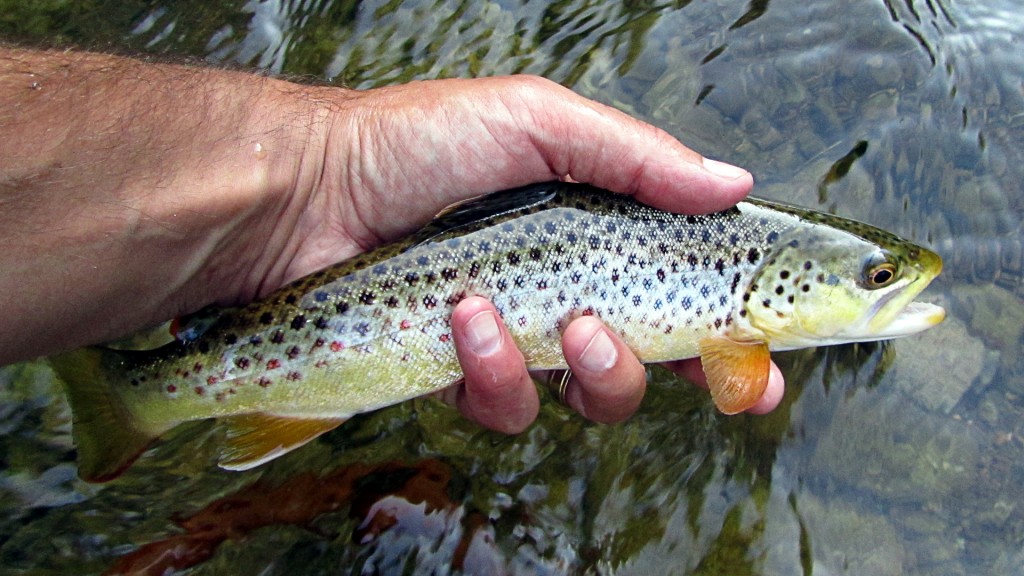 As I worked my way upstream, I caught a few more fish of similar size. Surprisingly, there were a number of very nice looking pockets beside and beneath larger boulders, what you’d call ideal / “A” water. In almost all of these pockets though, I failed to bring fish to the surface. Perhaps going subsurface here would have done the trick, but trying to present a nymph or streamer cast upstream directly below a boulder is pretty tricky, especially in this super clear water. Instead, most of my fish were caught in the shallower “B” water – basically, water you’d expect to hold a few fish but with less depth and structure.

I eventually came to a nice looking run that was below a sharp bend in the river. I began carefully covering the run with my casts, working from the outside in, to prevent fish from seeing the fly line before my fly. I missed a couple decent rises before landing a slender brown at the bottom of the run. 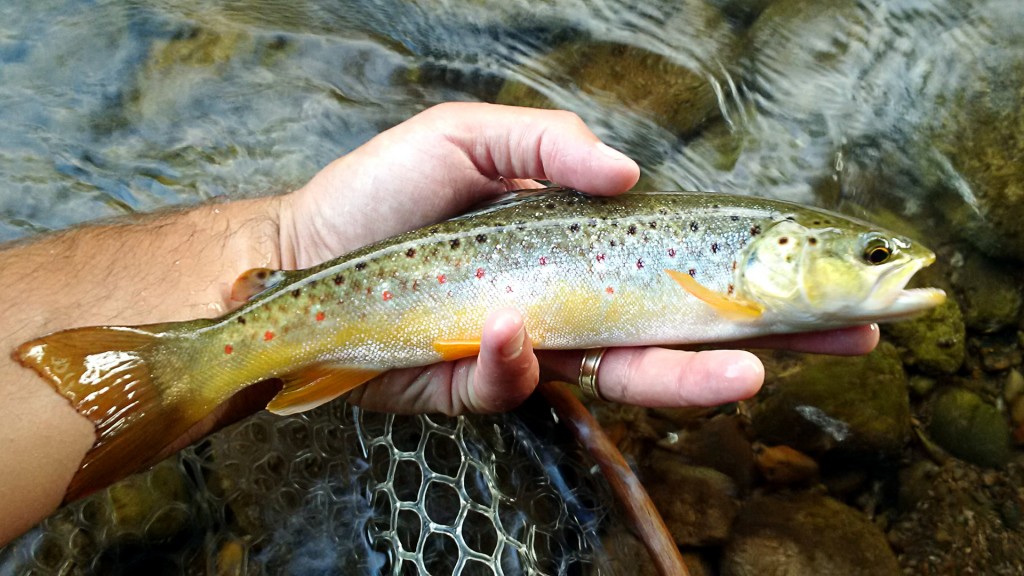 Around the middle of the run, the river narrowed and deepened a bit. If there were larger fish in this section, I figured they’d be here or in the nice looking pool up ahead. I stripped several more feet of line out of my reel, to present as long a cast as possible so not to land my fly directly on top of or behind a fish that might be holding there. I laid out my dry fly at the top of the run and watched in anticipation as it floated drag free towards the prime water. As the long silhouette of a trout rose up slowly from the bottom towards the fly, I recall time slowing down. The fish examined the fly as both it and the fly drifted backwards with the current, until it opened its mouth to inhale the fly and time sped back up.

That’s how I remember the take and although I catch trout regularly on the dry fly, it’s rare indeed that such perfect conditions come together to produce such a memorable rise. The crystal clear water, long cast, perfect drift, anticipation, stalking shadow and visible take. 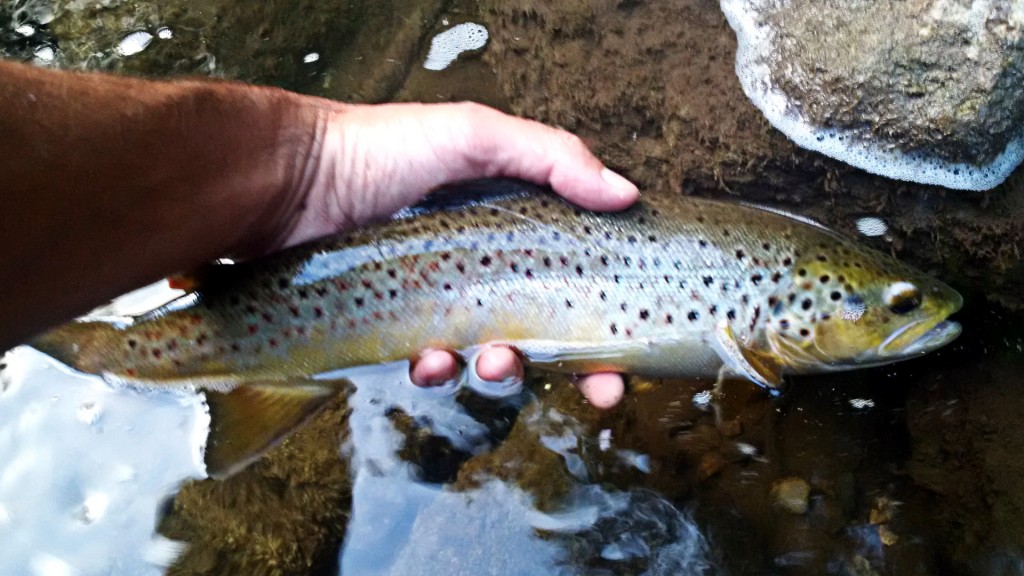 A nice Brown Trout landed after a very memorable take

In all the excitement, when I stood back up after releasing the fish, I was rewarded with a leg full of water. I was wearing a brand new pair of Dan Bailey hip waders and I’d forgotten that you can’t bend down in the water with them like you can with chest high waders! A bit of water wasn’t going to put a damper on my day though, so after removing my boot and wader leg and emptying out the water, I got back in the water and made my way toward the bend in the river upstream.

The sharp bend produced a deep hole, along with a large foam-filled back eddy. If history had taught me anything, this hole was guaranteed to hold at least a couple large fish. Sadly though and to my surprise, after many unsuccessful casts, darkness was already approaching and I hadn’t seen a fish from the hole yet. Since the wade back downstream was an easy one and the sun was already setting, I figured I’d wait a few more minutes and strip a big Gurgler through the hole a few times after dark. My luck wouldn’t change though and I eventually left the excellent looking hole, puzzled. I certainly wasn’t disappointed though, not after a successful and memorable day on a new stretch of water – I was just, puzzled.