Lack of rain and low water has continued to be a problem for the last several weeks, putting a damper in any chance of successful fall Steelhead fishing close to home. We did finally get a decent rainfall a couple days ago, with a bit more in the forecast, so hopefully more fish are making their way into the rivers and things will pick up.

In the meantime though, I’ve gotten out for some stillwater trout fishing at my usual spot. On calm days at this time of year, trout are cruising the shallows and stripping small unweighted streamers has been both fun and productive. It’s a nice change from having to fish an indicator setup or a sink tip line to deeper fish in hotter weather. 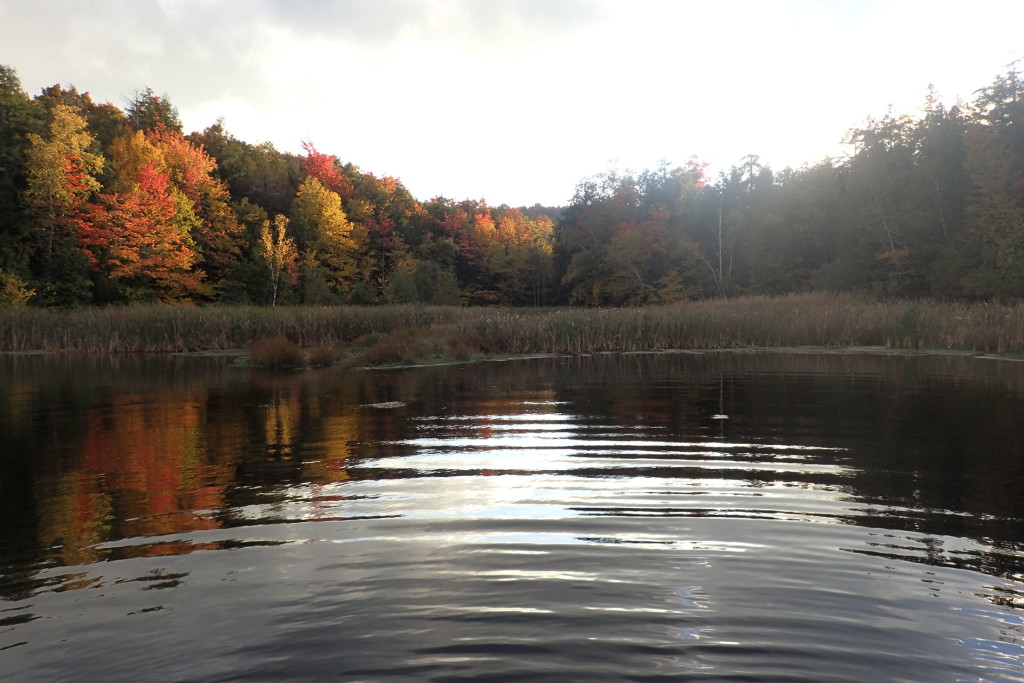 Stillwater fly fishing in the fall is about as peaceful as it gets.

Stillwater fly fishing often gets a bad rap around fly fishing purists, especially if stocked trout are involved. I know I’ve been guilty of this, but spending some time with it over the last couple years has changed my opinion. Would I choose it over wading wild rivers for native trout? Not really… Would I prefer if the stillwaters I fished were 100% native trout? Absolutely! However, I don’t have control over these factors and I’ve found stillwater the perfect substitute when neither of the latter are possible. It also helps (a lot) knowing that a healthy population of native Brookies occupy the same water.

As far as I’m concerned, catching any fish is exciting, be it a native Brown Trout, Bass, Carp, Sunfish or stocked Rainbow. There’s certainly no mistaking a five-pound stocked Rainbow for a native Brookie, but there’s a wide range of fish in these waters. The thrill of wondering whether a two+ pound trout at the end of my line is a stocked Rainbow or possibly the biggest southern Ontario native Brook Trout I’ve ever caught is what keeps things exciting. 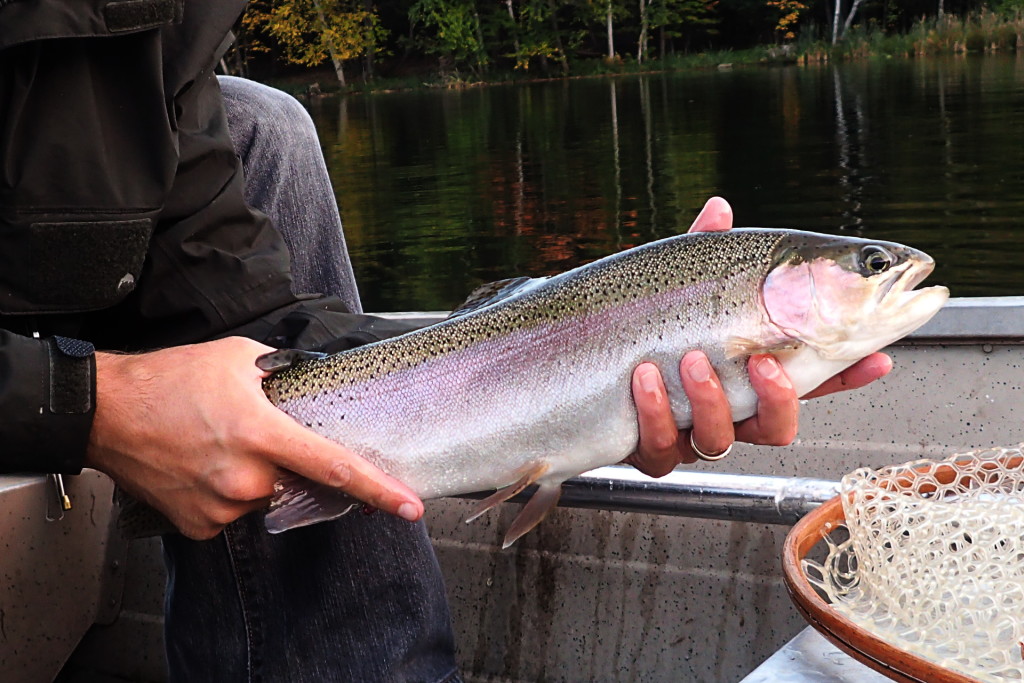 A chunky stillwater stocked rainbow from a couple weeks ago.

Speaking of Brookies though, I stuck around after dark for a bit the last time I was out (it’s hard not to when the days get so short) and the Brookies became really aggressive. Some above average fish were coming to the surface and I hooked into more twelve to fourteen inch Brookies than I probably ever have in a single outing. 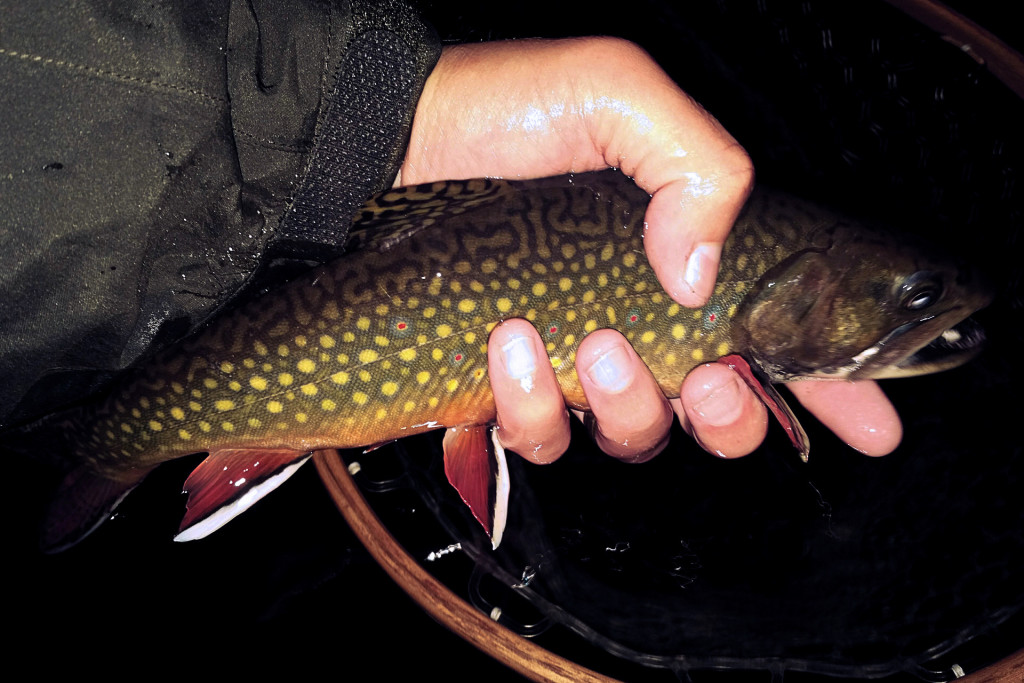 One of several nice Brook Trout caught shortly after dark.

The colours on these fish were stunning, as is to be expected at this time of year. A bit of daylight to add some more interesting background and colour to the photos would have been nice though. 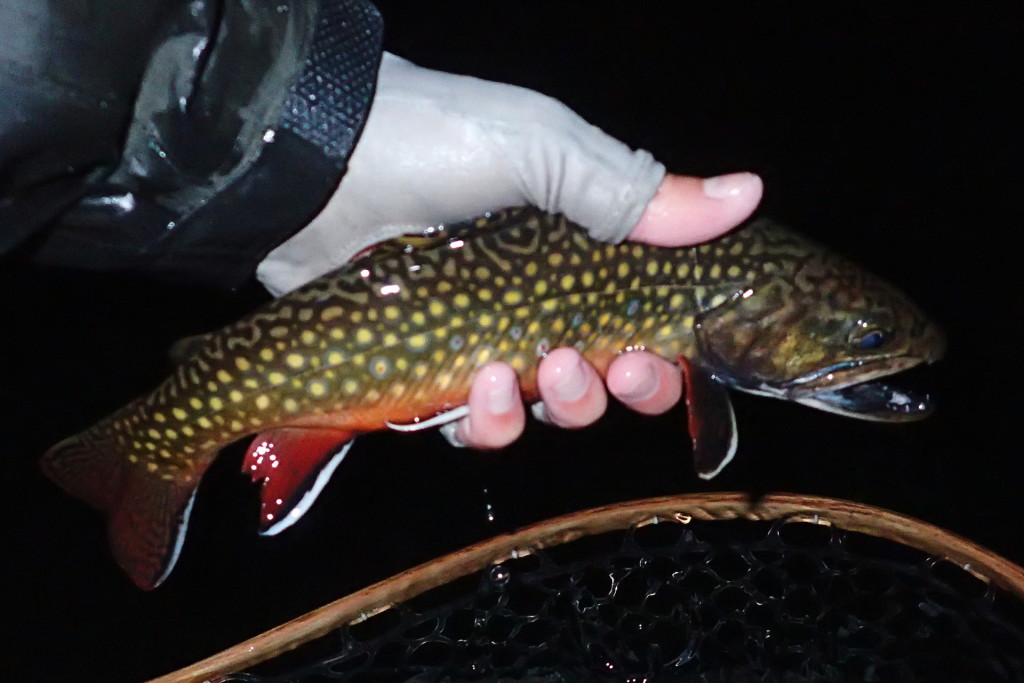 Another beautiful stillwater Brookie caught before calling it a night.

Of course, intermixed with the handful of Brook Trout were a bunch of Rainbows, but as mentioned before, this kept things interesting. I’m positive I lost at least one Brookie that was quite a bit bigger, but I feel like I end most posts with a statement like that…

I plan on getting out for Steelhead this week. Hopefully there will be a fish or two to show for it, but it will beat working either way.