Another trout season has come and gone and while mine ended in a traditional fashion, the majority of the season was anything but traditional here in southern Ontario. In an effort to keep this post positive and prevent it from derailing into another rant on our poor fisheries management in Ontario, I’ll simply say that 2015 will be remembered by many here as the demise of the resident Brown Trout. Yes, I’m mainly talking about the Credit River, so this isn’t a blanket statement (yet). However, some quick research into Ontario MNR fisheries management priorities should make it pretty clear that no river is safe in the foreseeable future, unless something changes. I’ll leave it at that for now, but I’ll be posting a longer rant on this in the upcoming days / weeks.

Now, on to the good stuff. As is customary, I spent the end of the season targeting Brook Trout on small rivers and streams. Even if our Brown Trout rivers had been fishing well (or, at all…), I’d still choose to target Brookies at this time of year. The waters they inhabit are scenic, have very little fishing pressure and the fish are in full pre-spawn colors at this time of year. 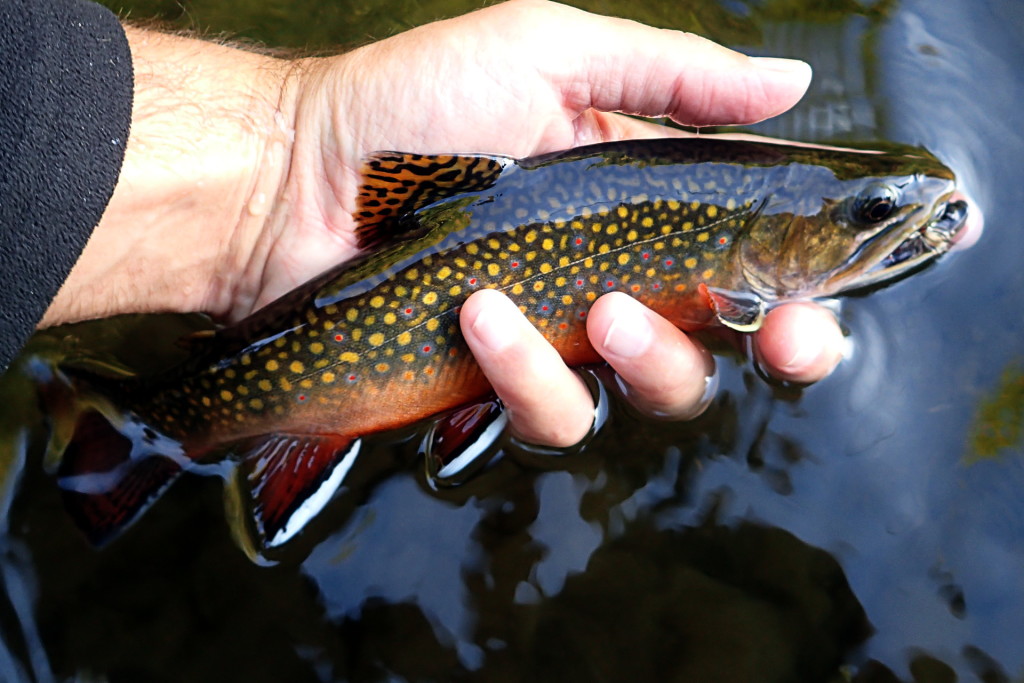 I would say this was one of the better years I’ve had for Brookies in the last decade. Not necessarily in fish size (although, several in the 12″ range were caught), but in numbers. In fact, until yesterday, I was convinced that Brookies in the area were on the rebound and that the overall health of the systems that contain them were improving. Then I realized, other than a few outings to new rivers for other species, I’d been forced to fish almost exclusively Brook Trout this year due to the aforementioned demise of the Brown Trout. In doing so, I discovered more new water that holds Brookies and I fished for them much harder than in the past.

In reality, these rivers are still only a fraction as healthy as they once were, even the few hidden gems that seem much more productive than the rest. It’s not all negative of course: thankfully we’re still able to find and fish for these excellent fish and for that I’m thankful. It does brings up an interesting argument against removing resident Brown Trout from local rivers though, as it gives anglers no other option but to target the more fragile Brook Trout. 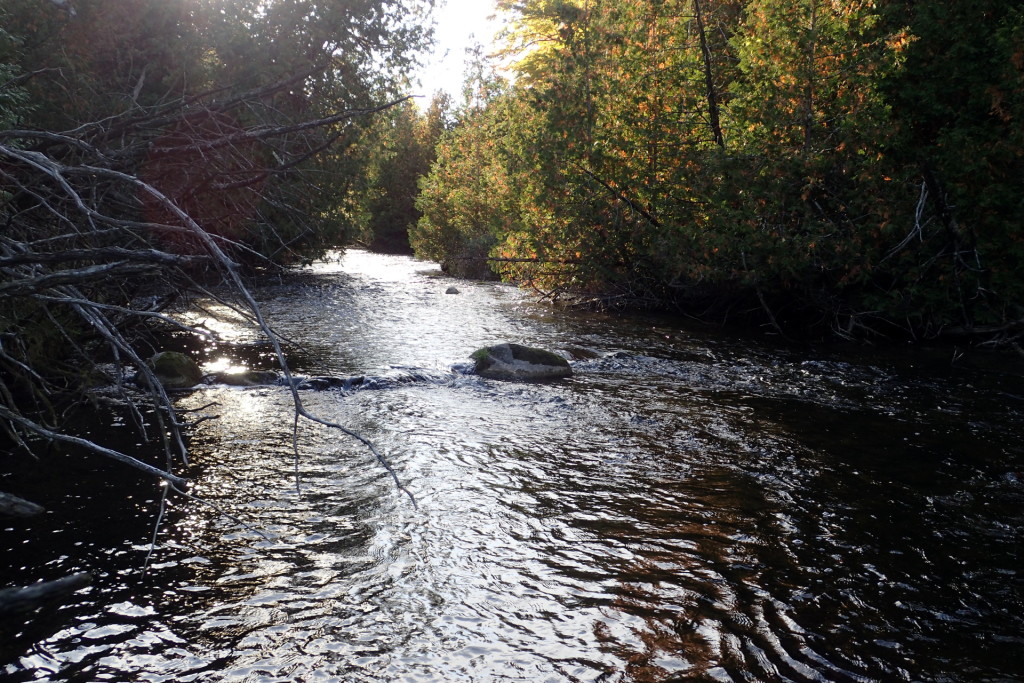 For some reason, the last hours of trout season always seem to spoil me. I don’t know if it’s the weather, the moon, my state of mind, or luck – but it always treats me better than most other days of the year, leaving me hopelessly awaiting the next time I can get back out and fish for resident trout (i.e. 7 months). This year, in the last few hours of trout fishing, I easily landed two dozen Brook Trout in water that, while productive, almost never provides success on that level. Most of the fish were an average 8″ or so, but colourful and always fun on light fly gear. 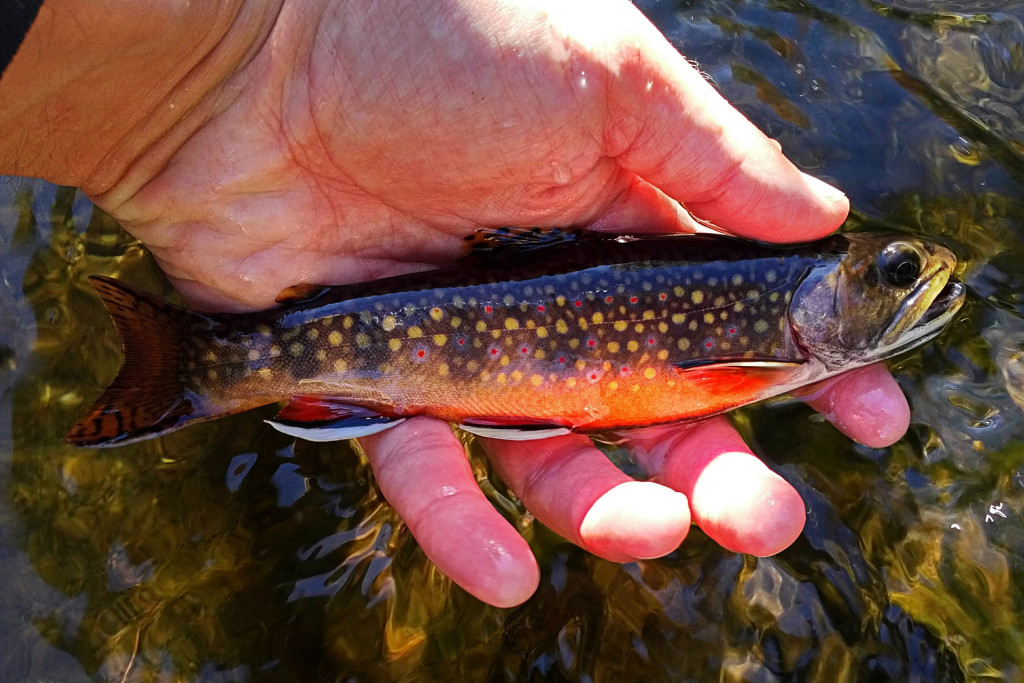 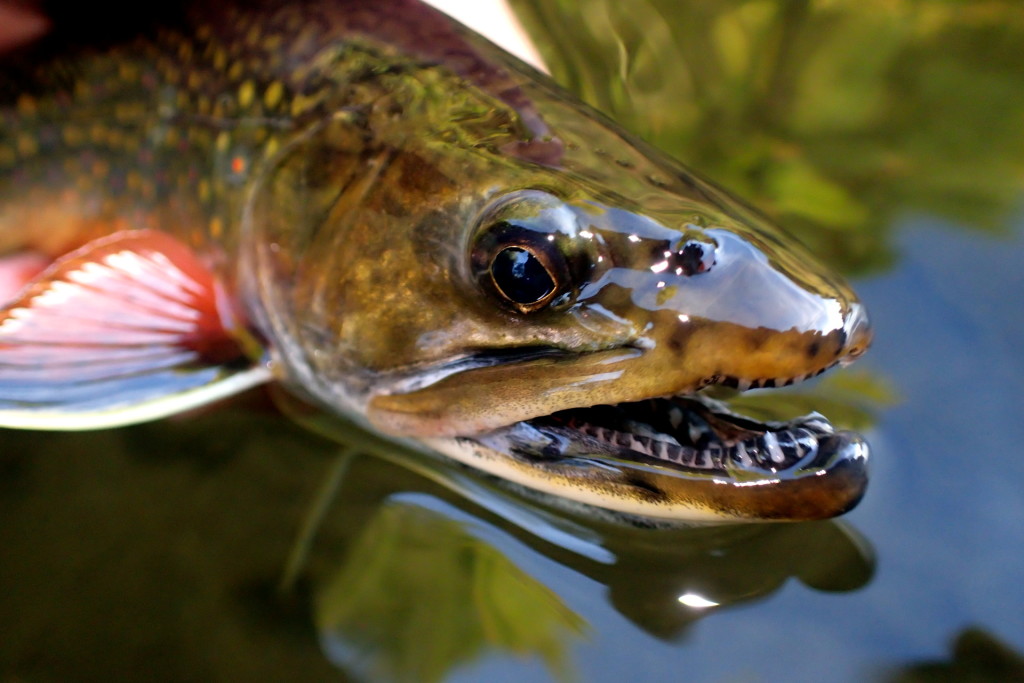 Some bigger Brookies were caught too – those are some mean teeth for a pretty Brook Trout!

It usually happens that, when I’m having the most success on a river, I’ve just tied up a fresh batch of flies that I feel good about. I know other people experience this too – as you fill your fly box with a bunch of good looking new ties (sometimes even brand new patterns you’ve never fished), you just get the feeling they’re going to produce. I fished only two flies on Wednesday: my old time go-to attractor, the Red Humpy and a first for me, a Thunder Creek Streamer.

The Red Humpy, for some reason, has always been a go-to fly of mine on local rivers when nothing else seems to be happening. I hadn’t actually fished one for the entire season, due to a combination of having no stock (and being too lazy to tie some) and more of a focus on fishing naturals and wet flies this year. I tied four on Tuesday evening and when I tied the first one on Wednesday afternoon, it didn’t get removed until a couple dozen fish later and near night time. Maybe any other fly would have also done the trick, I guess I’ll never know. It certainly put a bit of confidence back in that fly for me though!

When temps dropped and as the sun began to set, the dry fly action finally slowed up. I had recently re-watched an old video of the late Ian Colin James fishing Thunder Creek style streamers in low clear water on the Grand. I’d never used these flies before, but I liked the look of them as far as streamers go (I’m not usually a very big streamer fan). Anyway, I tied a couple the night before and decided to give it a whirl after the Red Humpy. Of course, it worked like a charm and was actually very fun to fish. I cast it upstream and twitched it very fast downstream, eliciting strikes on nearly every cast. I’m sure it won’t work for shit when I tie it on next year, but I’ll certainly be thinking about it. 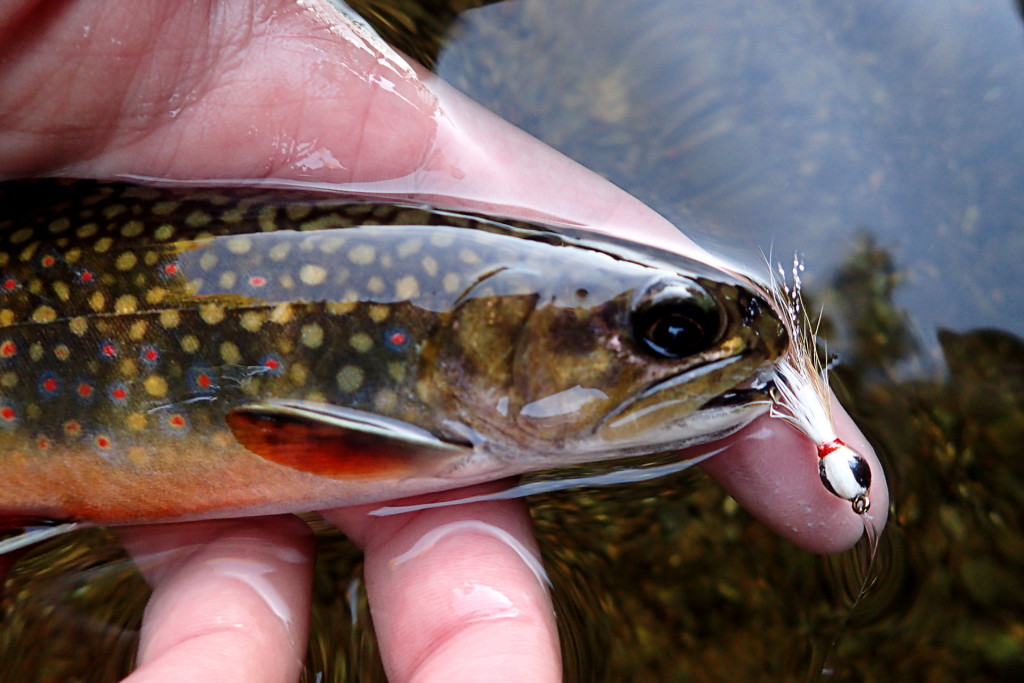 Brookies of all sizes liked this little Thunder Creek Streamer

Now, it’s great that I was catching all these Brook Trout and in all honesty, I’d be perfectly happy if that was it. However, to make things even more interesting, I ended up with a Trout Trifecta. In the midst of the insanity that was non stop Brookie action, a surprise rainbow decided to show up. Quite rare for the water I was fishing, although known to exist. I believe they’re left over from a short time when rainbows were planted here years ago. 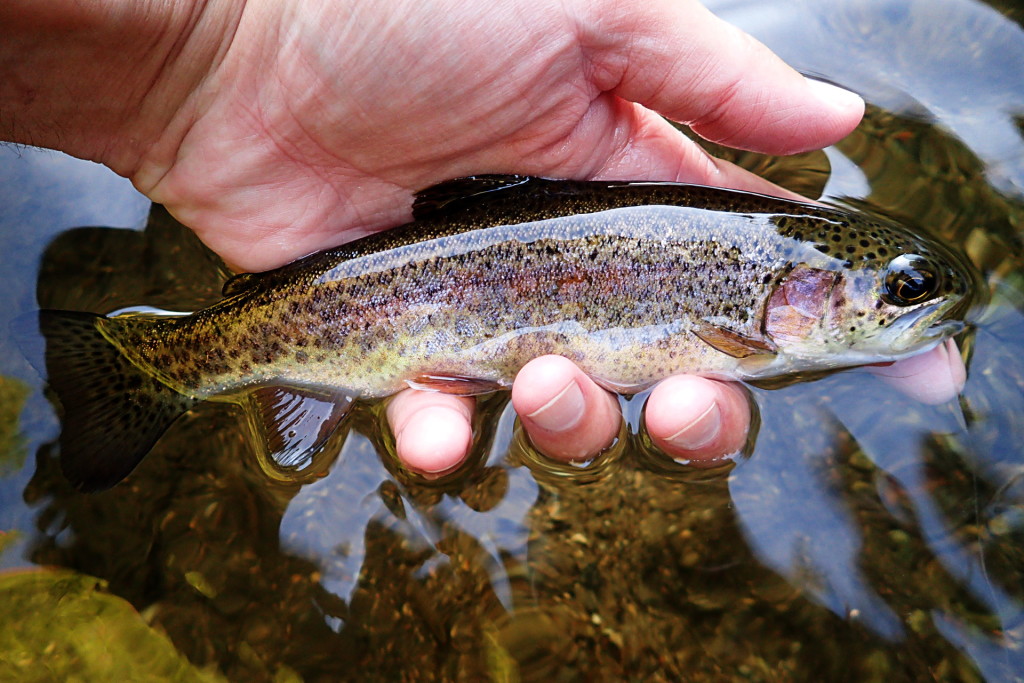 In fairness, the Brown Trout part of my trout trifecta was not taken in the same water. Instead, I stopped off at the newly unproductive upper Credit River on the way home to throw some mouse patterns after dark. Yes, the Credit is fishing horribly for Brown Trout this year thanks to the river being taken over by a gazillion stocked Atlantic Salmon juvies and who knows what else (reports of some shady removals of Browns from certain sections of the river, etc).  However, there are still some big browns to be had and there’s no better time to find them than after dark. Figuring it may well be the last time I ever set eyes on on a treasured wild Credit River brown, I had to at least give it a go.

The temperature had dropped substantially by the time I got on the river. Definitely not ideal for night fishing, however the sky was clear and it was just days after the Super Blood Moon, so perhaps there was hope. Add to this my luck for the previous couple hours and I was pretty confident a big brown would find its way to my net.

Without exaggeration, I tied on a #2 mouse pattern when I arrived, waited for my eyes to adjust to the darkness, then got into position to begin fishing. I placed my first cast to the back of the pool and bam! With a huge splash I set the hook and the fight was on. As I turned on my headlamp to shed some light on things, I saw a huge brown bolt downstream. It was in the general vicinity of my fly line and it’s pretty easy to be a bit disoriented in the dark, so I thought it was actually the fish I had hooked until it continued downstream and out of sight. Turns out, it was another huge brown in the same pool that I spooked by turning on the headlamp. My catch was no slouch, but it also wasn’t quite the hog I watched swim away while fighting it. 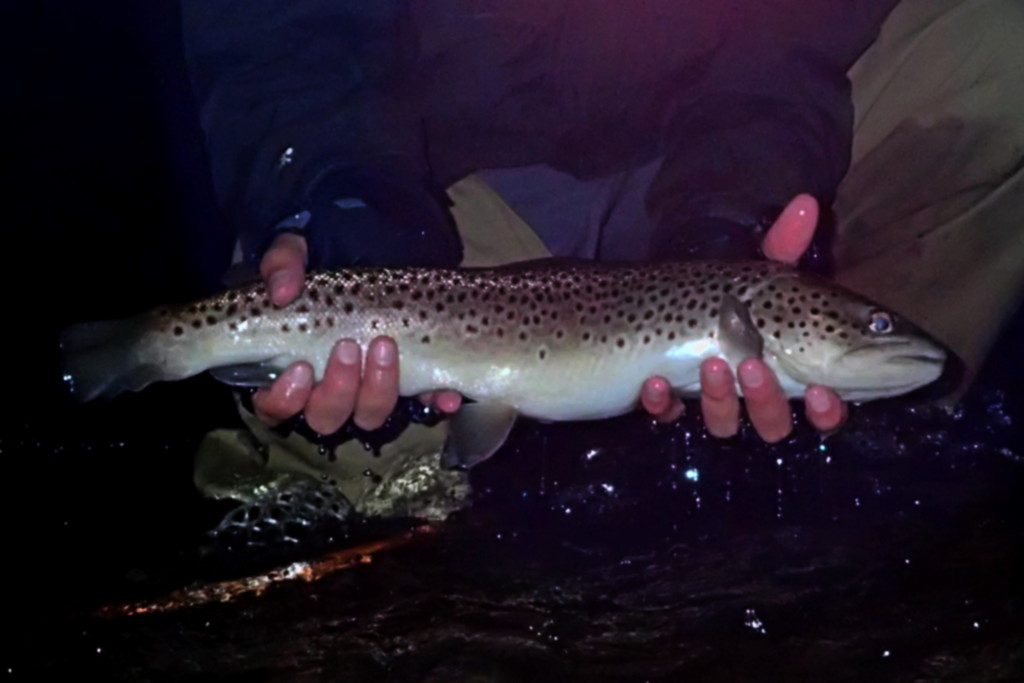 A big Credit River brown, my last resident trout of 2015 – hopefully not my last Credit brown.

A productive 4 hours of fishing and as usual, enough to keep me dreaming of next year’s trout season. In the meantime, I still have some Steelhead, Bass and stillwater Trout to look forward to.