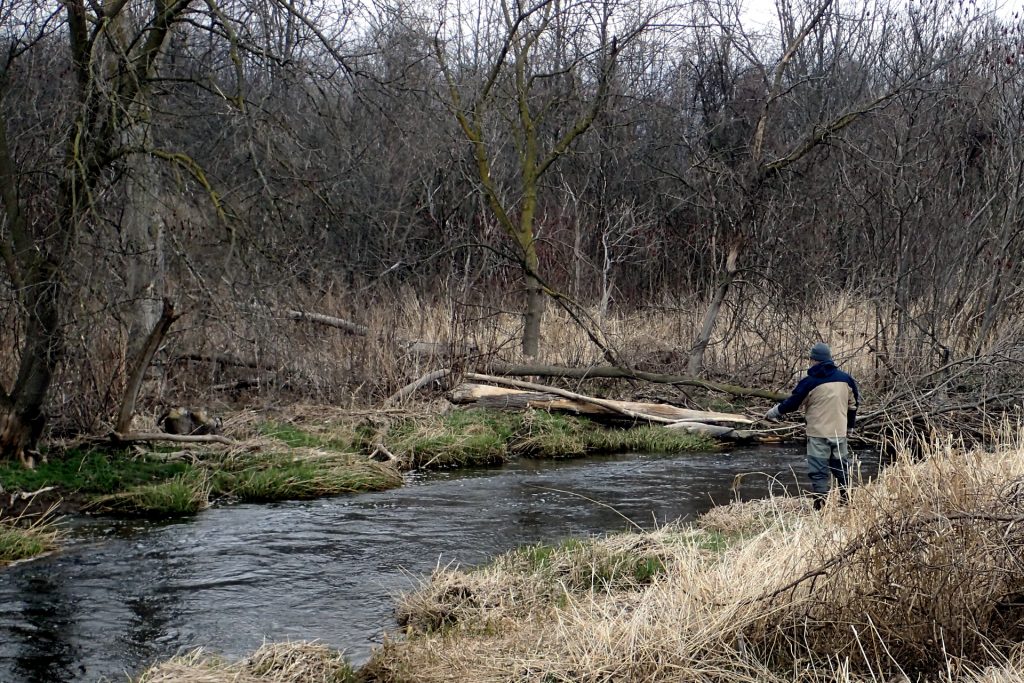 Opening day was cold and mostly unproductive, at least for the first couple of hours. We didn’t get out until late afternoon and opted to fish some familiar brookie water, which showed some signs of other anglers having fished it before us. It was cold enough to warrant gloves and toques and we were rewarded with only a couple small brookies. 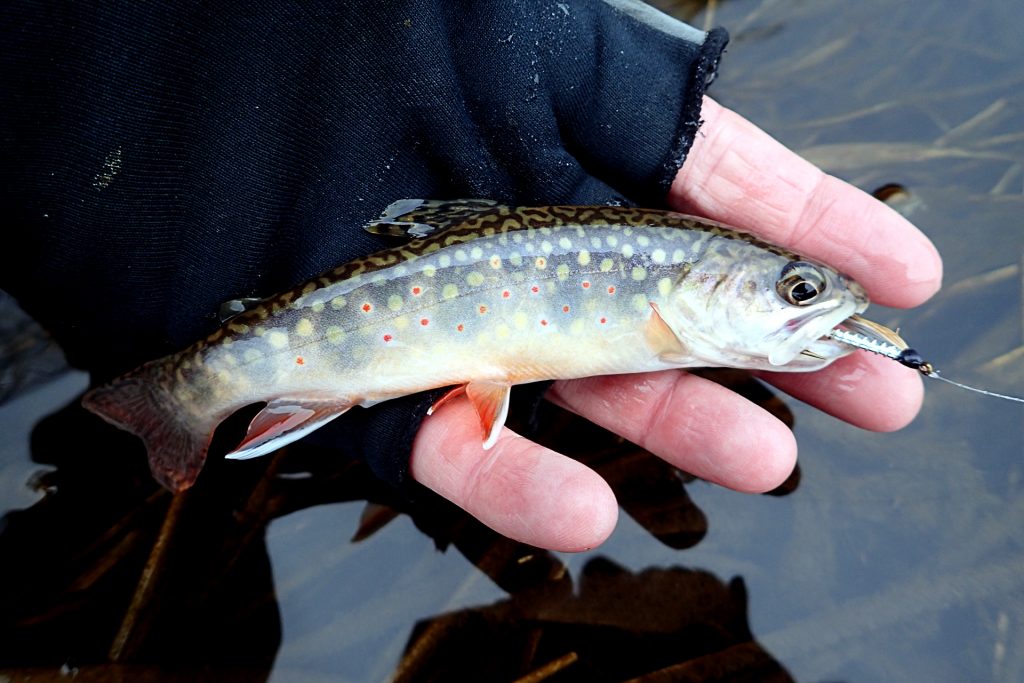 First brookie of the year. Sometimes you have to take what you can get.

With little to show for our efforts, we got back in the truck and headed to another spot that we frequent less (and seems to receive less fishing pressure as well). The stream here was in excellent condition due to the higher than normal spring water levels and the brookies were more cooperative. We hooked into a few good fish before the day was over… Ryan in particular landed a couple nice brookies in some of the better holes, all of which were quite fond of a tiny black bugger. 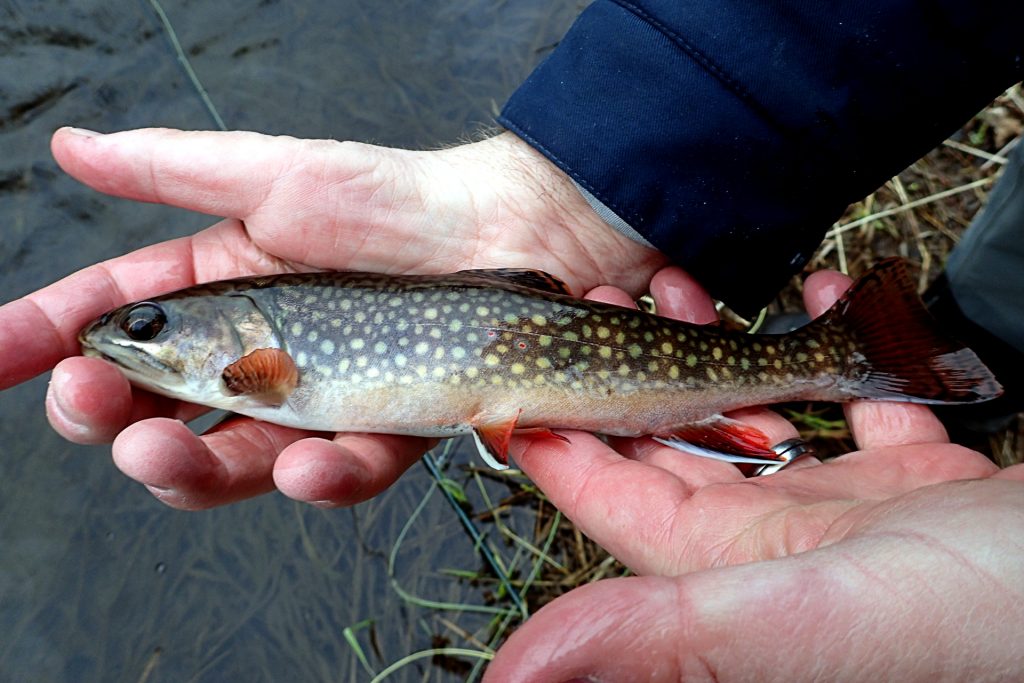 Fast forward a couple weeks and the weather has taken a turn for the better, with just enough rain and temperatures high enough to kick-start some bug activity. I made a last minute decision to hit up another brookie stream for a couple hours after work, for no other reason than to wind down from a busy day. It turned out to be a wise decision, as I was met with near ideal conditions: perfect water levels and clarity, a flurry of Hendrickson spinners and a lot of hungry brook trout! 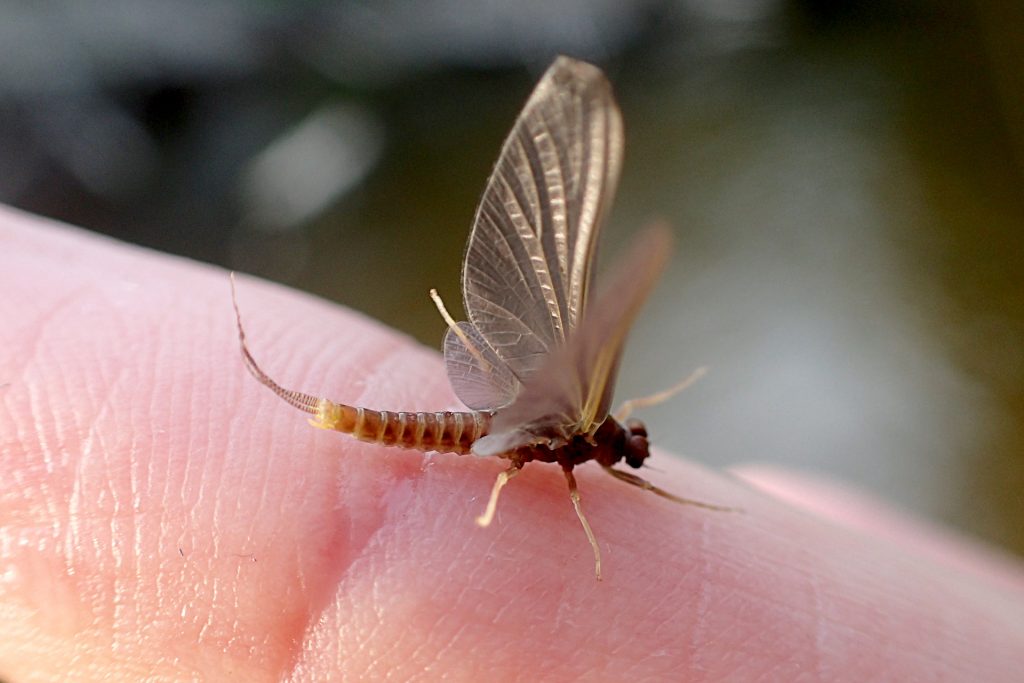 Lots of Hendrickson activity had the brookies eager to eat.

I fished the same water a week earlier and had left fairly disappointed – having caught only a single wild brookie and an ugly stocked trout that seemed to have somehow survived the winter. It’s water that typically fished well regardless of conditions and I wondered if the health of the stream had deteriorated.

My worries were put to rest on this day however, with nearly two dozen wild brookies caught in the span of an hour and a half. I fished a beaten up Hendrickson from last year, with a yellow egg sac to match the naturals. It was good enough to fool them, as I quickly hooked into my nicest brookie of the season so far. 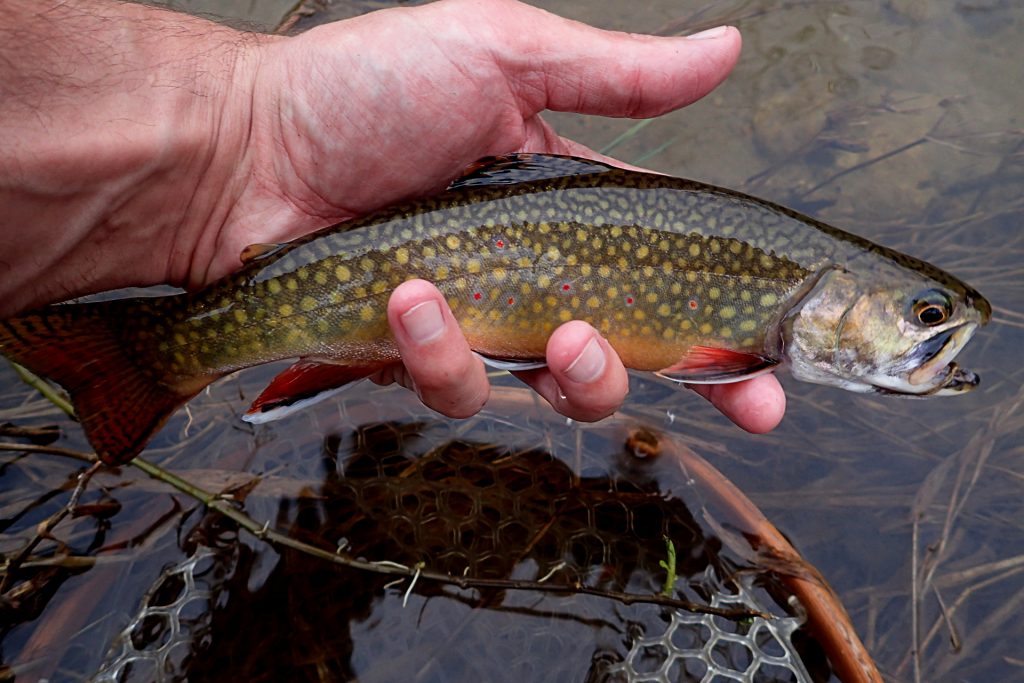 An excellent small stream brookie, unusually chunky and colorful for this time of year.

In addition to the bigger brookies, I was happy to have also caught a number of tiny overzealous brookies. Along with the many I caught, I missed countless others that thrashed carelessly at my fly – which was far too large for them to take on. Seeing these fish in such numbers is a great sign that the stream is still in very good health. 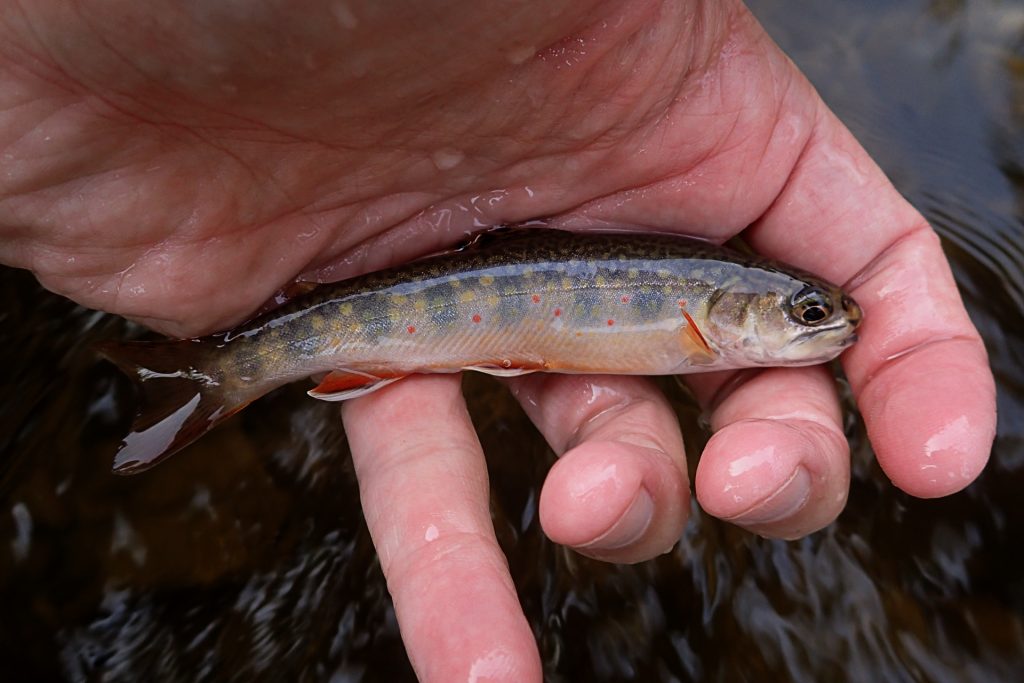 One of many small brookies learning valuable life lessons via catch and release.

As the evening progressed and the sunlight dwindled, I switched out my now beaten up and difficult to see Hendrickson for a bushier Red Humpy. I tend to have a lot of luck with this fly, especially during Hendrickson or Isonychia hatches. It has brought up some large brook and brown trout for me, when other flies were less productive. To be honest, it probably has a lot more to do with confidence than it does the fly. 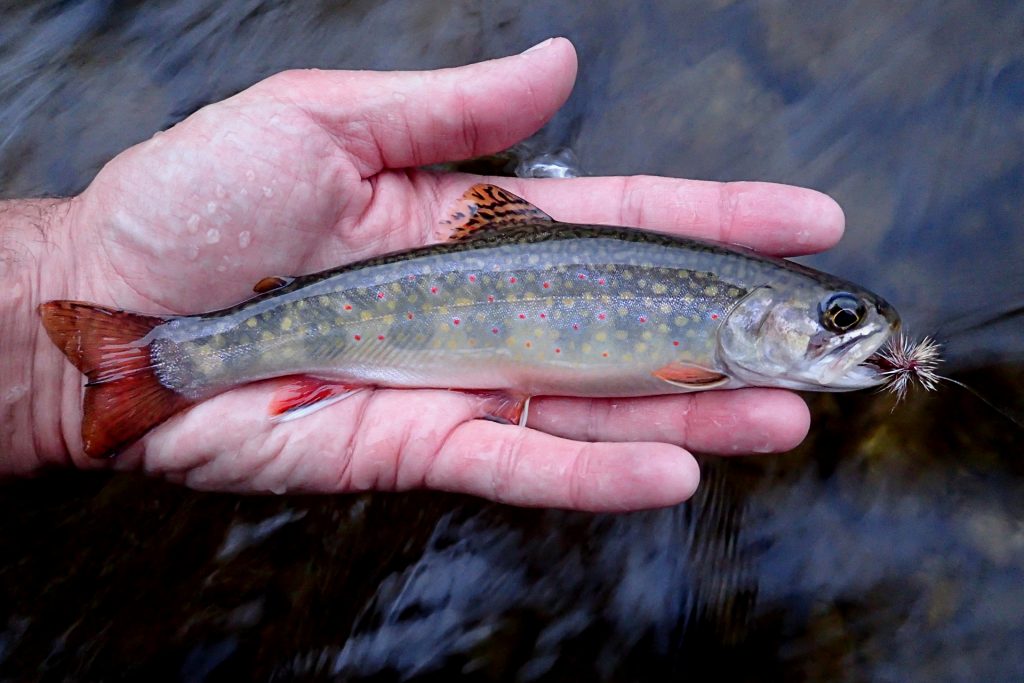 A pretty brook trout (aren’t they all?) taken on a Red Humpy later in the evening. 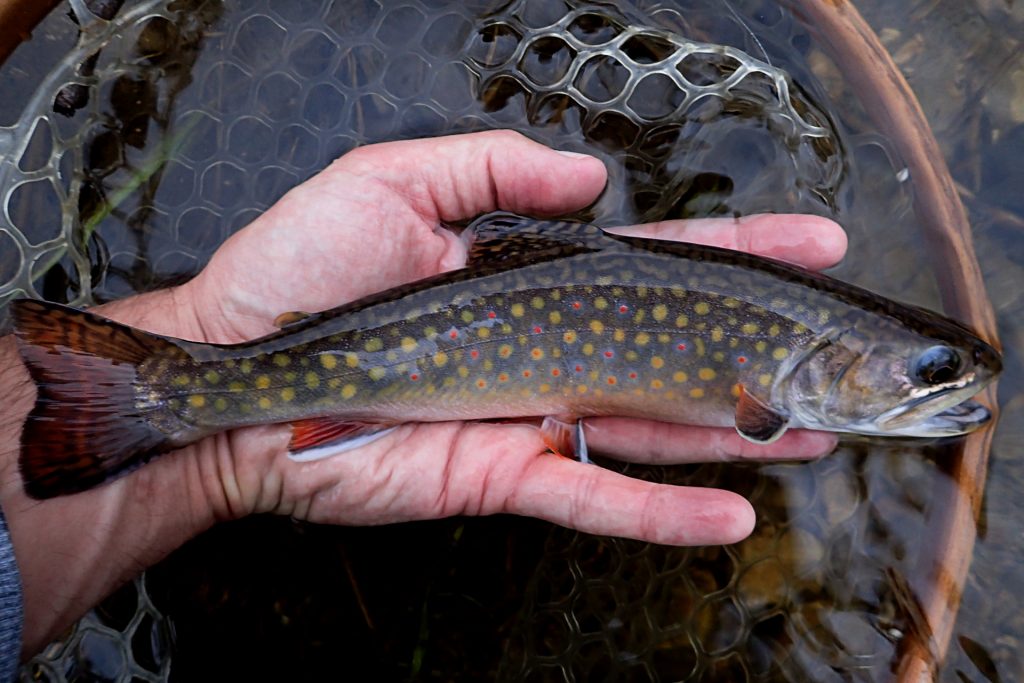 One more good sized brookie that went bonkers for a Red Humpy.

It’s nice to see bug season in full swing now. With the long weekend approaching (and some free time to spare), I’ll likely get out a couple times for Brookies in the coming days. I’ll also finally be spending some much-needed time chasing Brown Trout as well.