If you haven’t heard, the MNR is currently considering a plan that will see a number of changes to the current Credit River fishery. The plan is focused around improving the existing native Brook Trout population and protecting the Atlantic Salmon that are being stocked into the Credit as part of the ongoing (and largely unsuccessful to date) Atlantic Salmon restoration program for Lake Ontario.

Details on the working proposal can be found here. Apparently, the MNR will be going public with this at some point for broader feedback. When they do, I sincerely hope they get lots of eyes and feedback on these changes, especially from those with intimate knowledge of the river. My main beef with the plan as it stands is the proposal of removing current catch-and-release regulations for Brown Trout on the upper section of this river. They want to allow (and encourage) harvesting of Browns of any size from this excellent and one-of-a-kind fishery. The thought of even considering this change is painful in so many ways… I simply can’t understand the justification. 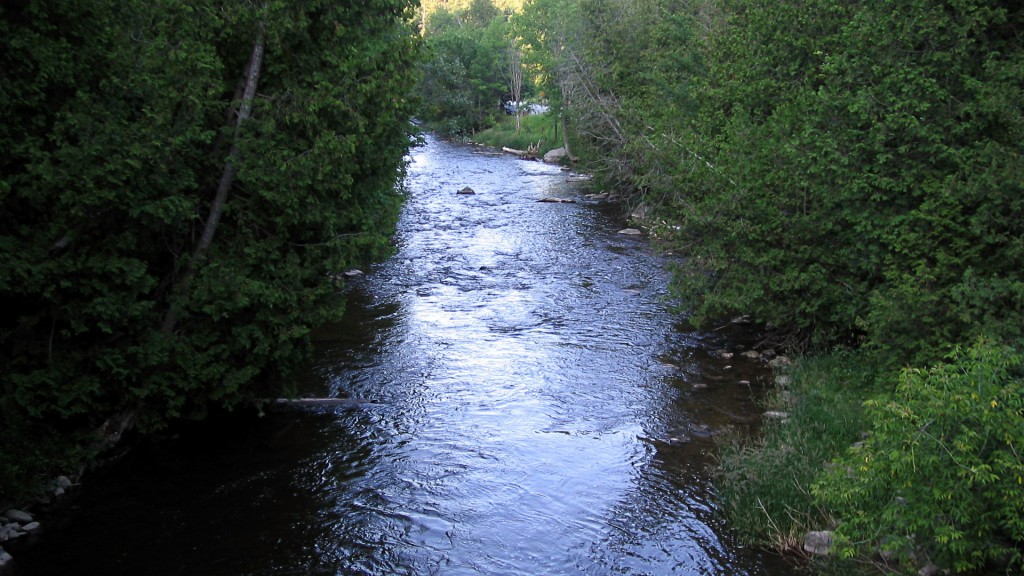 Obviously, promises of reintroducing fish specifies that were once native to the area and have long been extirpated (Atlantic Salmon) or are currently threatened (Brook Trout) is something that any unknowing conservation-minded person might back. Likewise, it’s probably something many tax payers wouldn’t mind knowing their tax dollars are going towards. However, I wonder if that would be the case if they knew the whole story and the history behind it all.

As far as Brook Trout are concerned, I think everyone is right to be disheartened at the declining numbers in the Credit River over the last decade and more. I’ve only lived in and fished the area for about 10 years and even in that short time I have noticed a fairly considerable decline in their numbers. How much of this is REALLY related to Brown Trout though?

If you aren’t familiar with the Credit, the Cataract falls separate two very distinct sections of river. Below the falls (on the main branch), Brown Trout are the primary species, whereas the section above the falls is a purely Brook Trout fishery. If Brown Trout are largely to blame for the decline of the Brookies, why is it that above Cataract the Brookies have been steadily declining, with no pressure from Brown Trout? Just because some research shows that Brown Trout compete with Brook Trout, why jump to the conclusion that removing the treasured Brown Trout that draws most anglers to this river is the solution? I’ll tell you why… it’s because they don’t want any of their precious stocked Atlantic Salmon parr

As for the Atlantic Salmon, the long and short of it is that they completely disappeared from Lake Ontario in the 1800’s. Since then, efforts have been ongoing to attempt to reintroduce them, more recently with the Credit River receiving millions of stocked Atlantics. As a migratory fish, the success of the project can be measured by tagging and counting the number of fish that mature and re-enter their home rivers to spawn after reaching adulthood. While numbers of returning fish are not generally shared, most of those with inside knowledge suggest the numbers of returning adults to be shockingly low – low as in not even a fraction of a fraction of a percent. I’m certainly not most knowledgeable person to back this information, so I suggest you do some Googling and research of your own. In fact, this forum post is as good a start as any: http://www.spoonpullers.com/forums/index.php?topic=19871.0.

Here is some interesting background:

I’m sure I’ve missed some important points, but it’s easy to see that there are a lot of factors at work here and killing off the Brown Trout in the limited section of water they current inhabit on the Credit River is not going to solve any problems. On the contrary, I feel it will unnecessarily destroy one of the last blue ribbon wild resident trout fisheries in Southern Ontario.

I’m not saying we shouldn’t try to improve things. Obviously something should be done about water quality and temperature increases on the Credit and I can say first hand that there is not nearly enough restoration going on today. The Au Sable is yet another great example of how much of a difference conservation alone can make in improving water quality. Why not invest more money and start there? Restore Brook Trout populations above the Cataract, in tributaries such as Silver and Black Creek and perhaps on the West Credit before killing the Brown Trout fishery on the main branch.

Finally, I’m no biologist and I couldn’t possibly claim to have the solution to the Atlantic problem. All I can say is: given the success to date, is it really worth sacrificing existing wild and sustainable fisheries for the slim chance that it could make the difference and turn this currently failing program around? Does the Credit River really need to keep being the test tube for Lake Ontario? Give it a break…