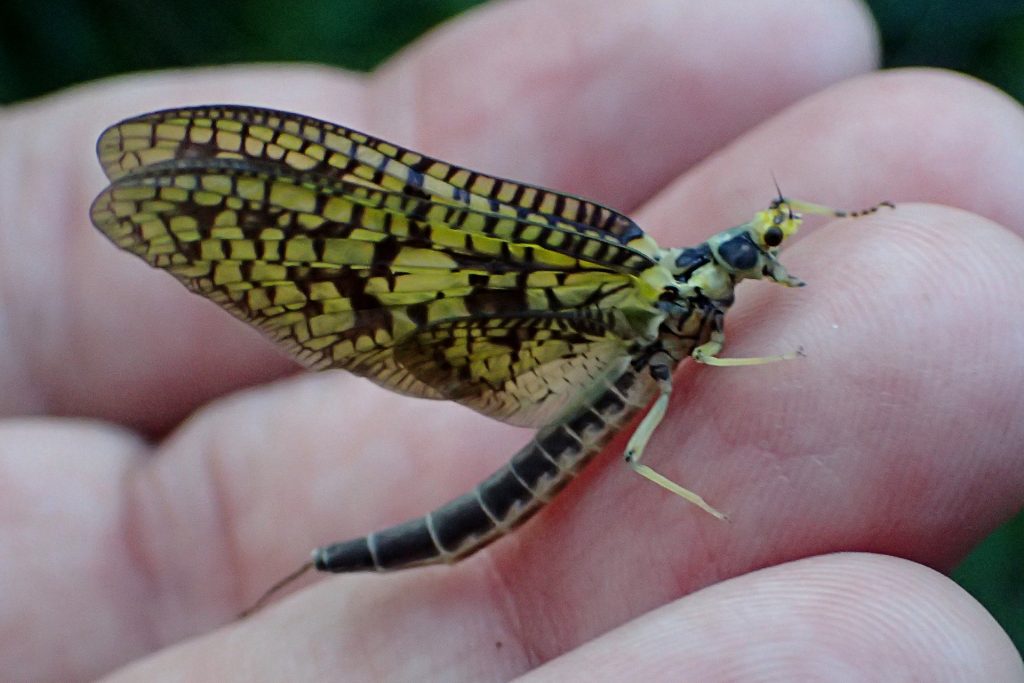 In the 12 years I’ve been living in the area and fly fishing the Credit, it was the first time I was able to truly experience what a real Green Drake hatch is like on this river. Many long-time veterans to the river (who are all too familiar with the careless behavior these big bugs bring about in large trout) were also there to partake in the action, along with a number of others there simply to observe and take notes (Dr. Frania included).

When I arrived Wednesday evening around 5:30 pm, it was clear, sunny and warm, with a few Yellow Sally stoneflies fluttering about. Still too early to expect any major bug activity, I tied on a yellow sally and casually fished upstream, keeping an eye out for signs of Green Drakes. In about an hour and a half of fishing, I caught a couple small browns and a slew of another fish that I imagine many unknowing fishermen believe to be tiny browns: stocked Atlantics. Fishing smaller water for average sized trout has become extremely difficult on the Credit due to these fish… when there’s not a larger trout to chase them away, they simply  take over the river, virtually eliminating any chance of catching a wild brown or brook trout. They’re also twice as aggressive (and dumb) as the wild fish, meaning they’re usually the first to jump at a potential meal.

Around 7:00 pm, I peered up into the trees and noticed a good number of large mayflies fluttering about, still fairly high up but slowly making their way down. They seemed far too large to be Gray Foxes and I was hopeful they were the Drakes I’d been waiting for. 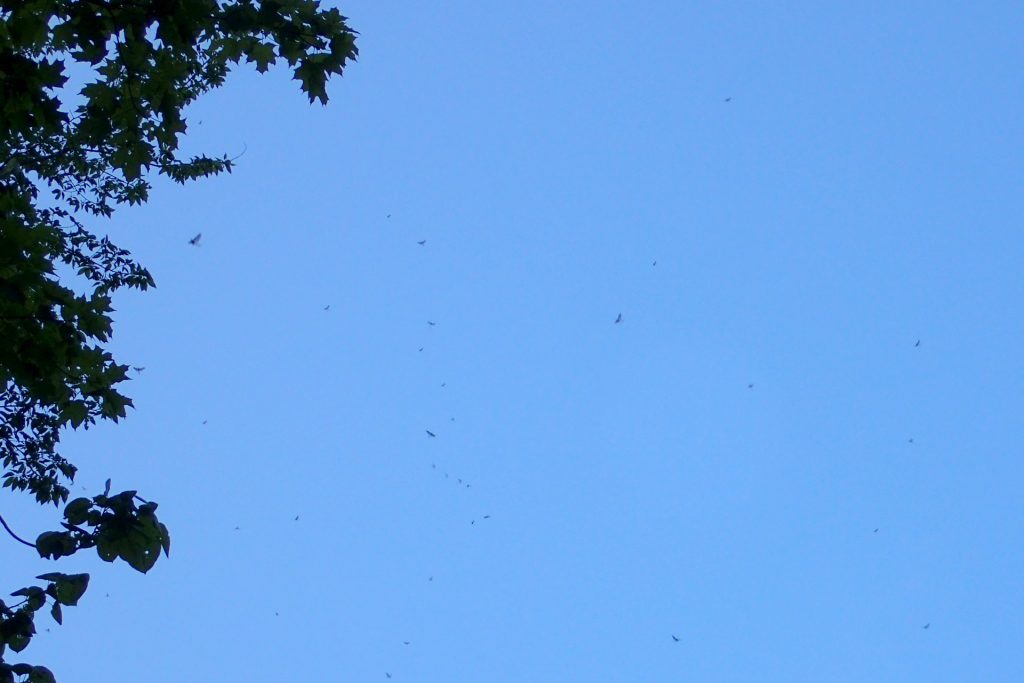 Less than 5 minutes later, they began descending rapidly towards the river and I confirmed that they were indeed Green Drakes. They were spinners in fact – and there were lots of them! The duns would have emerged a day or two prior and it meant there was a good chance for some hungry browns to come out from hiding. 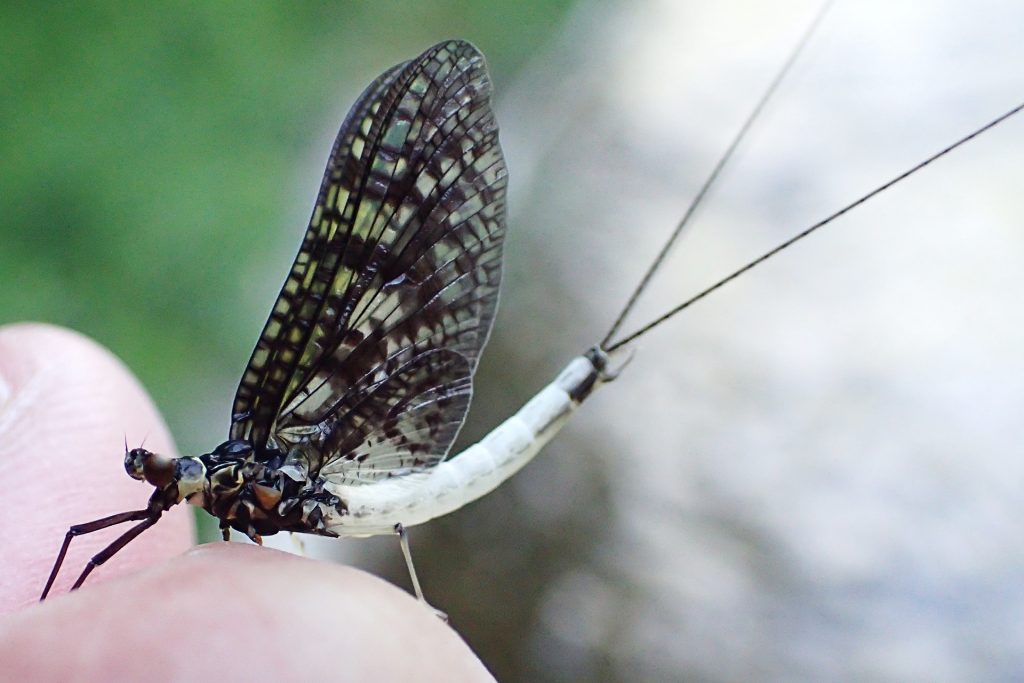 Green Drake spinner (a.k.a. Coffin Fly) descending onto the Credit

Thankfully, I opted to skip the Dun imitations and instead tied a few spinners earlier that day. They seemed to be a decent match to the bugs I was seeing. 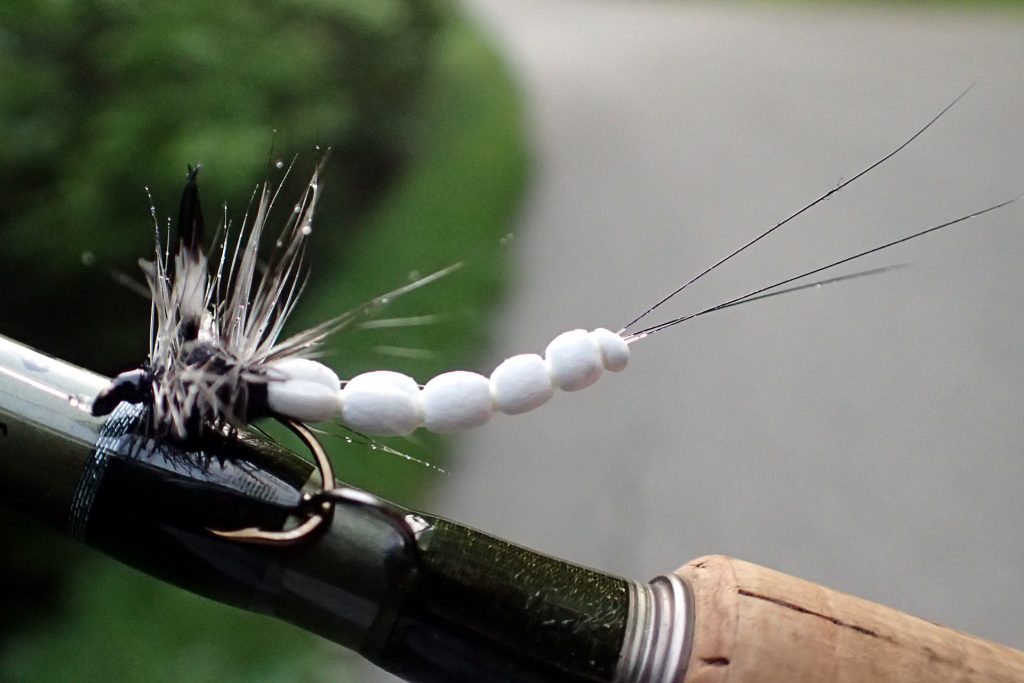 As most fly fishermen know, even when the stars align, the conditions are just right and the fish are rising – it’s still never a free ride. You need to work for your fish and you have a limited time window to do so. The urge to rush should be resisted – it’s best to observe and be patient before making hasty casts. Fooling a large wild brown trout on a dry fly is no simple task, even when they have Green Drake tunnel vision.

Such was the case as I fished to a pool of trout rising to these large mayflies. My first fish was easily the largest of the night (and of the season so far). I watched it rise violently under a large overhanging tree branch… the type of continuous rises that I have very rarely seen the likes of. After several such rises in the same location, I carefully placed a cast a couple meters upstream and watched in anticipation as my coffin fly imitation floated over the target zone. The rise was even more violent than the previous ones as it leapt a foot out of the water with my fly. It was a large, dark fish, but sadly it was a short-lived battle that I lost as it thrashed back and forth while performing another aerial acrobatic.

Thankfully, it didn’t take long for another fish in the pool to forget about the alarms and dangers it had just witnessed and it graciously took the same fly. This time a smaller fish, around 12″, but satisfying nonetheless. 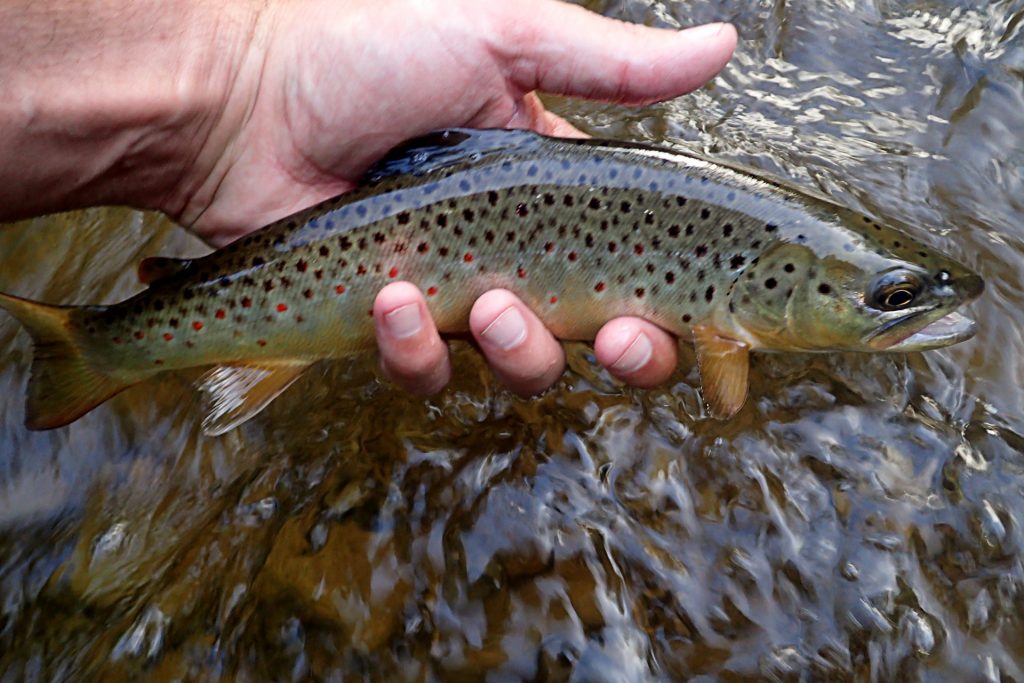 The drakes were fairly constant from about 7:00 pm until past dark, along with a fair number of duns that I spotted emerging. The spinners were bouncing all over the water, depositing their eggs on the surface. I became fixated on another large fish that was rising but simply was not interested in my spinner. I’d noticed a few duns coming off in the vicinity and while I didn’t have any dry fly duns, I did have a couple Green Drake wet flies that I decided to try. It was to no avail however as the fish eventually suspected my shenanigans and was put down.

I had another fish snub my fly at the last second and I pulled the hook out of one more before finally hooking into a better fish. It wasn’t as large as the first brown that I lost, but it was a good size and very healthy and strong. It’s hard to beat catching wild browns like this on a dry fly. On that note, someone please remind me why we’re stocking millions of 3-4″ atlantics that will either die or at best make it out to the lake then die (and never contribute to the upper river fishery), when we have wild browns like this in the river?

A nice, clean 16-17″ wild Brown Trout caught on a spinner

This was my last fish of the night, but I stuck around for a while to film some of the drakes and rising fish. With two days of vacation still remaining, I left the river content, having experienced what I hoped to. The drakes were very thick at times, so much so that a few even bounced off my fly rod while I was casting – a feeling that was similar to casting a bead-head streamer and having it clip my rod.

The resurgence of the Green Drakes this year has certainly been encouraging and it makes one wonder whether mother nature has begun sorting out the issues that plagued these insects for years past. As great as it is to see the bugs making a bit of a comeback though, it’s not all silver lining. There are still sections of the river that remain devoid of the Green Drake, where it was once abundant. There’s also other ongoing threats, such as declining native Brook Trout numbers, over saturation of the river with stocked Atlantic Salmon and MNR imposed threats to the remaining wild Brown Trout. For now though, I think this is one win that’s worth celebrating.