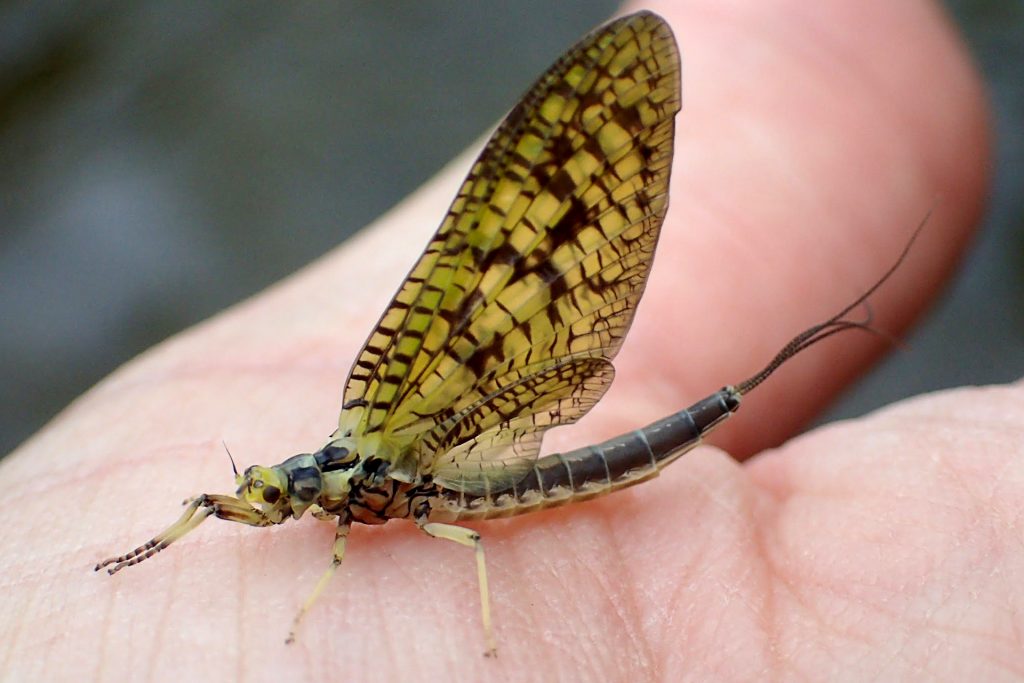 Compared to last year, the duns seemed fairly small on average, though the trout weren’t overly concerned about it. The pool I was fishing had several Browns interested in the emerging duns, more than can be said for most of the remainder of the hatch.

Typically the spinner (Coffin Fly) is what really gets the fish excited – and although it was too early to expect spinners, I’d tied only a single Green Drake dun for our evening fish. I brought a friend along, hoping to get him into a nice Credit River Brown. We sat for a while and simply observed, until some fish began rising in a foam patch at the back of the pool. When the rises became regular, I tied on the only dun I had and carefully placed several casts across the pool into the foam. It didn’t take long before hooking into a nice mid-sized brown that eagerly inhaled the size 8 extended body fly. 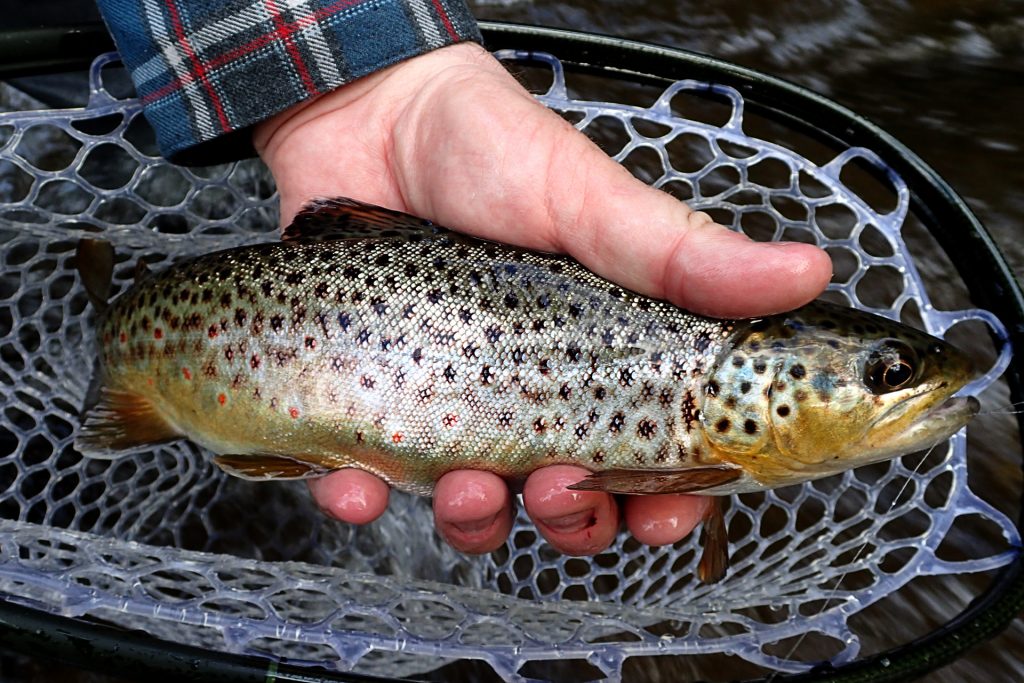 A good looking Credit River Brown Trout taken on a Green Drake Dun at the start of the hatch.

In hindsight, I should have let Ryan take the first casts, as we failed to fool any more trout for the remainder of the night (except on nymphs). Mind you, we only fished a small piece of water and had limited time before the sun went down. 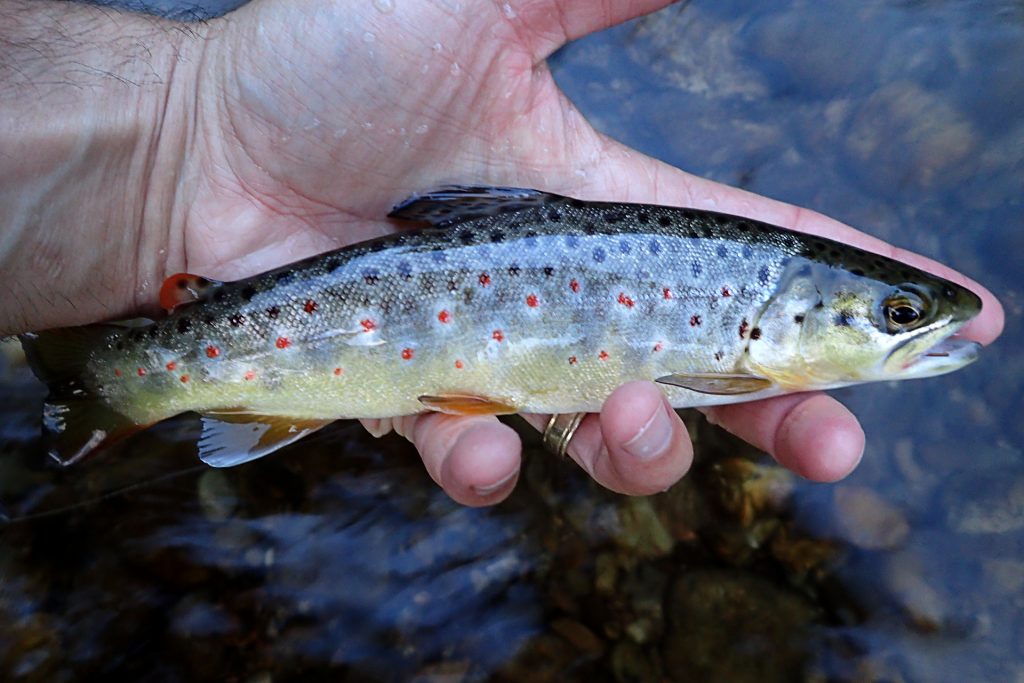 A small Brown that took a Green Drake nymph.

Along with the drakes were a good amount of foxes, increasing in number as the sun faded. It’s possible the trout were more interested in the foxes, but I didn’t have any such flies with enough weight to penetrate the foam where the browns were rising. 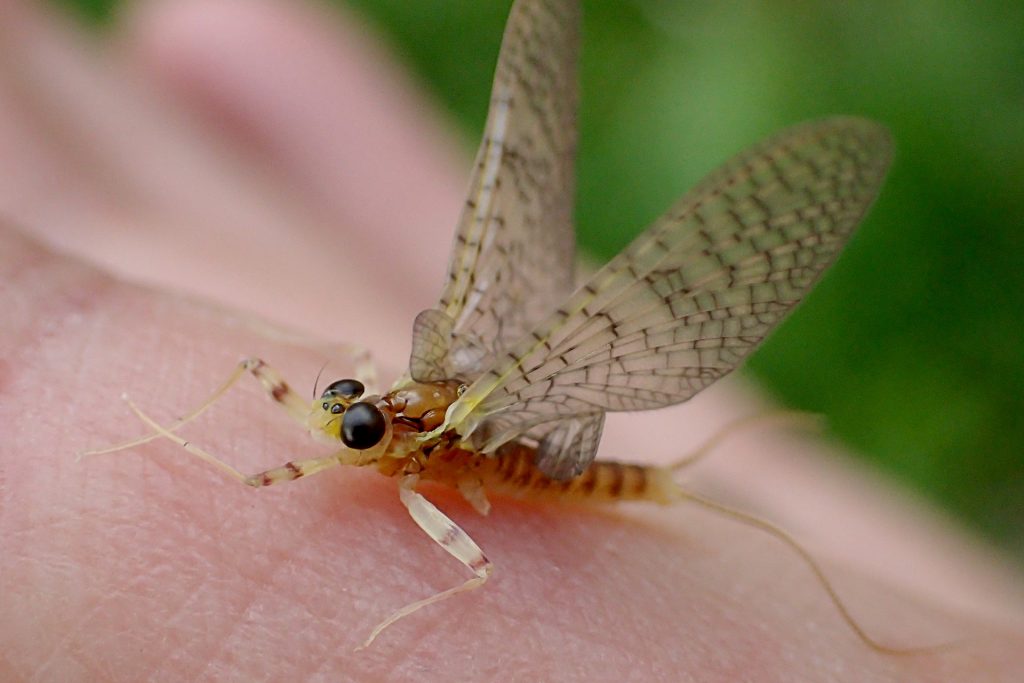 Grey Foxes were thick for most of the drake hatch (and beyond).

When the sun did finally set and only the very odd rise could be seen at the back of the pool (and when we gave up trying to convince them to take a drake or fox imitation), I decided to try a large mouse(like) fly before calling it a night. I wasn’t expecting anything, but since there were some trout obviously looking up, I thought I’d give it a try just in case.

Well, a few casts in, as our eyes were still adjusting to the dark, a huge fish came right out of the water in the corner of the pool for my fly. In the light, the shape appeared to be that of a brown… only, it was huge… close to 30 inches was my guess. We both freaked out, thinking it was the biggest brown of our lives.

Unfortunately, if history teaches me anything about this river, it’s that when I think I’ve hooked a 30″ brown, it’s probably a Pike. This held true once again as I managed to land the fish on my 4 weight. 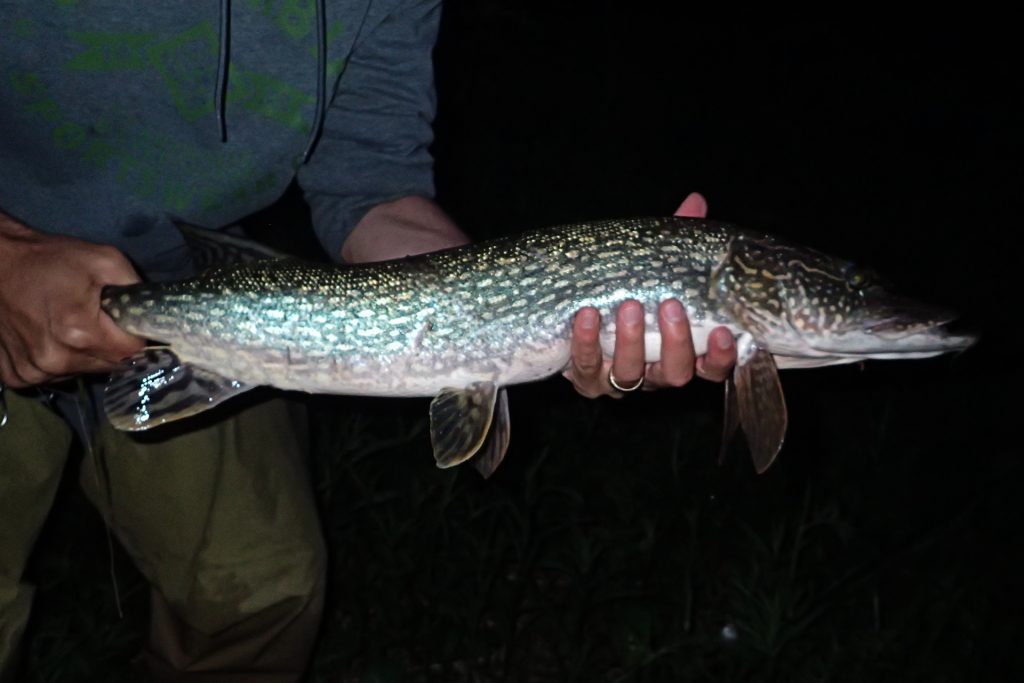 Another unfortunate catch on the upper Credit, briefly mistaken for a huge trout.

The next evening was similar to the first, with a large number of Green Drake duns and a few spinners later on. However, fishing was much tougher, with only a couple smaller fish hooked on a fox dry. Not many risers and much less interest both my duns and spinners. Apparently the peak activity was earlier (before 6:30 pm, which is when I arrived at the river), so perhaps I missed the better window. 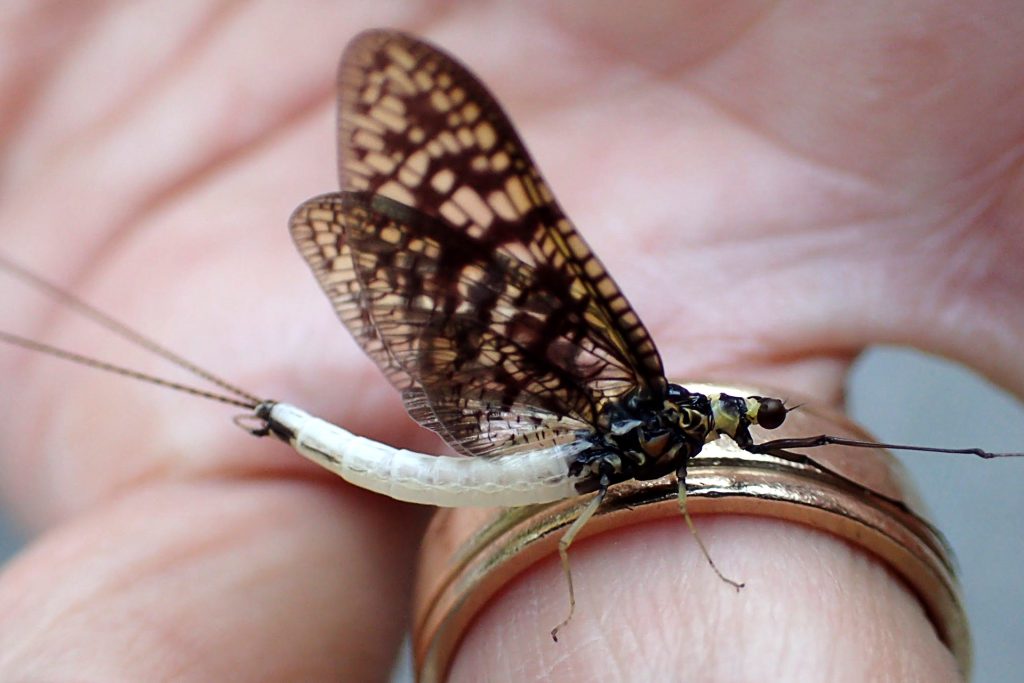 A coffin fly (spinner) from the second night of the hatch.

I fished a couple more times over the next week and witnessed a couple fairly thick spinner falls, both of which started extremely late and didn’t bring any large fish to the net. It wasn’t until last Thursday, when only a few straggler spinners were left kicking around, that I hooked two more chunky, colorful browns. I caught the browns back to back blindly fishing a spinner imitation on a nice run. Considering the lack of activity, I was only half-heartedly casting and not expecting the catches – so didn’t have my camera ready. It just goes to show you though: even when trout aren’t actively rising, if there were recently big bugs on the river, short-term memory may very well be enough to trigger a strike from a decent fish.

Although the fishing wasn’t quite up to par with last year, the Green Drakes certainly made another decent appearance and it seems that they have indeed made somewhat of a comeback on the upper Credit. Unfortunately though, this is true for only a small section of the river – with the West branch still almost completely devoid of them. I suppose there’s still hope that other sections of the river may also slowly recover their populations.

Over the course of the hatch, in addition to the regular folks, I met a few new people on the river as well, including a couple friendly guys (Simon and Paul) who recognized me from the blog. It’s always great meeting like-minded anglers on the river and putting faces to names. Simon was fishing a pretty sweet setup too (the same rod and reel as me, up one weight) 🙂

From here on out, we have Isonychia and Stoneflies to look forward too, as well as some night fishing as the weather continues to warm into the summer.