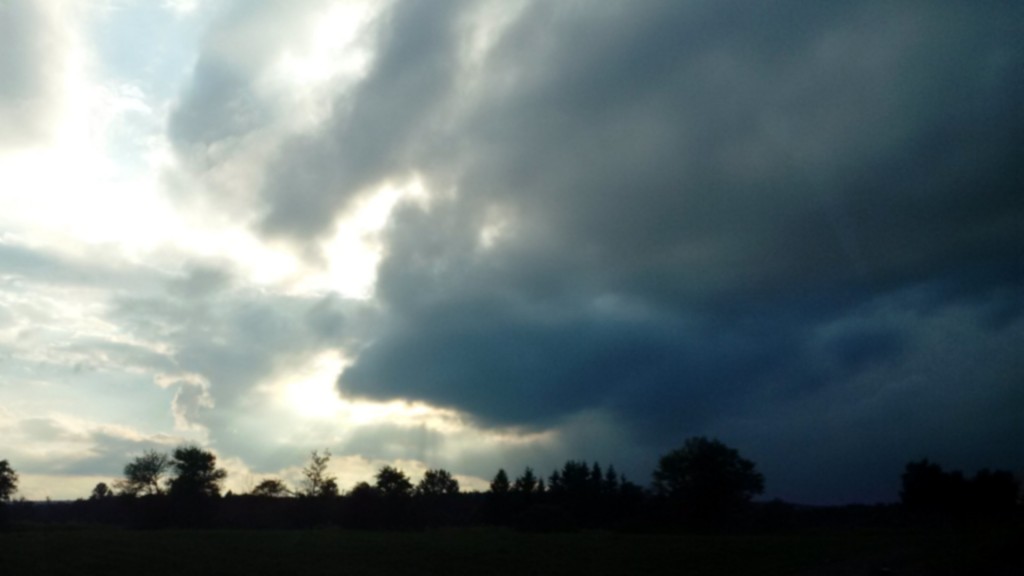 Saturday, I decided to try a spot that I was relatively unfamiliar with. I’ve fished the section a few times during the day, so I know it had some nice water. However, I had never spent time scoping out exactly which holes would be good to throw flies at after dark, or how exactly to approach those holes. The result was me fumbling around in the dark trying to find a way to get into a favourable casting position when I could barely see. Needless to say, I had no luck Saturday night. Strike one.

Sunday, I was going to play it safe and head to a well known spot – where I have plenty of experience night fishing. The weatherman was calling for a small chance of thunder showers, but it didn’t look serious and considering his track record of forecasting weather the past couple weeks, I decided to test my luck. I drove to the Credit after dinner and no sooner than I put my waders and boots on, it started to rain. It was raining lightly at first, so I put my rain jacket on and continued to gear up. Just as I walked away from my car, it began pouring. Assuming it would last only a short while, I got back in my car and waited for it to pass. A few minutes later, my buddy sent me a text saying there was a tornado in Fergus, heading north east (i.e. where I was). Not believing him, I did a quick search on my phone and sure enough, there was a funnel cloud spotted in Fergus. I started the car and drove back home. Strike two.

Lesson: Listen to the weatherman.

Monday, the forecast was looking a bit better, other than the fact that it was cold and windy – typical post storm conditions, not usually associated with good fishing. Nevertheless, I was determined to make up for the last couple nights and headed to the spot I intended to fish the night prior. Other than a light sprinkle later in the evening, the weather participated. After about an hour of casting a Gurgler after dark, I hooked up with a nice sized Brown Trout. Unfortunately, I think I didn’t set the hook well enough and lost him after a small fight.

Lesson: Big flies don’t hook themselves in big trout. Set the hook with some authority!

I no doubt spooked the pool a bit during the previous hook up, but was determined to stay until at least one fish made its way to my net. I tried several sizes and colours of Gurglers and I could not entice another rise in the next hour or so. On top of that, I was beginning to suffer from twisting tippet (after re-tying my leader a couple times already). At about 10:30 pm, just about ready to give up, I decided to try one last fly: a Foam Mouse. A couple casts in produced a violent take and this time I remembered to set the hook. The result was this nice Brown Trout. Third time’s the charm!

One thought on “Fall is in the Air”