If you’ve read some of my past trip logs, you’d realize that my trips don’t usually go quite as planned – this trip was no exception. I missed out on fishing the first two mornings and evenings of my trip: a late start Friday morning, helping my buddy pack up camp Saturday morning and parties Friday and Saturday night. Most of this was not unexpected though and thankfully, there’s more to life than fishing. Evenings were spent enjoying excellent food, drink and company with a large group of friends who have started a tradition of throwing a party each year during canoe weekend. In honesty, I was the youngest person there and most of them are friends of my parents, who also attended. Some of them helped get me started fly fishing many years ago and I’ve gotten to know others over the years. Their friendliness and appreciation for the outdoors, fishing and the simpler things in life means there’s always an interesting story to hear or conversation to have.

Due to the above, the first two days were restricted to afternoon fishing, which isn’t usually the most productive at this time of year. Both days were spent on the North Branch of the Au Sable, on sections of the river I have never fished before. Friday was warm, sunny and windy, with no visible bugs on the surface – ideal conditions for terrestrials. However, other than one nice overzealous trout that leaped a foot into the air for my friend’s hopper (and missed), the only fish caught that day were by him, on smaller olives and patriots. Saturday afternoon was spent fishing a different stretch of the North Branch that I learned about the night before. I left with a couple small brookies, a missed larger fish and a bunch of nice trout that I spooked by almost stepping on some hidden structure that I didn’t see.

Something I’ve come to realize over the years is that familiarity builds confidence, which is about the most important thing you can bring to a river. In my opinion, confidence is more important even than fly selection or presentation. We’ve all experienced that feeling of knowing that if you drift a fly perfectly through a certain piece of water, you’re going to hook up with a fish. Not matter how experienced you are, there’s something very humbling about fishing an unfamiliar river where you don’t really know what you’re getting into.

Sunday was time to go home, but I wasn’t going to leave without one good morning of fishing. I drove out to a more familiar stretch of river on the Holy Waters section of the Au Sable and was in the water by 6:15 am. This is the same water the canoe racers tore through the night before and a local fly shop warned me that the fishing might still be a little slow due to this. What I planned to be a quick few hours of fishing turned into nearly 8 hours on the water. I suppose the other fishermen were turned off by the fact that the race just ended the night before, because I didn’t see another angler all day. 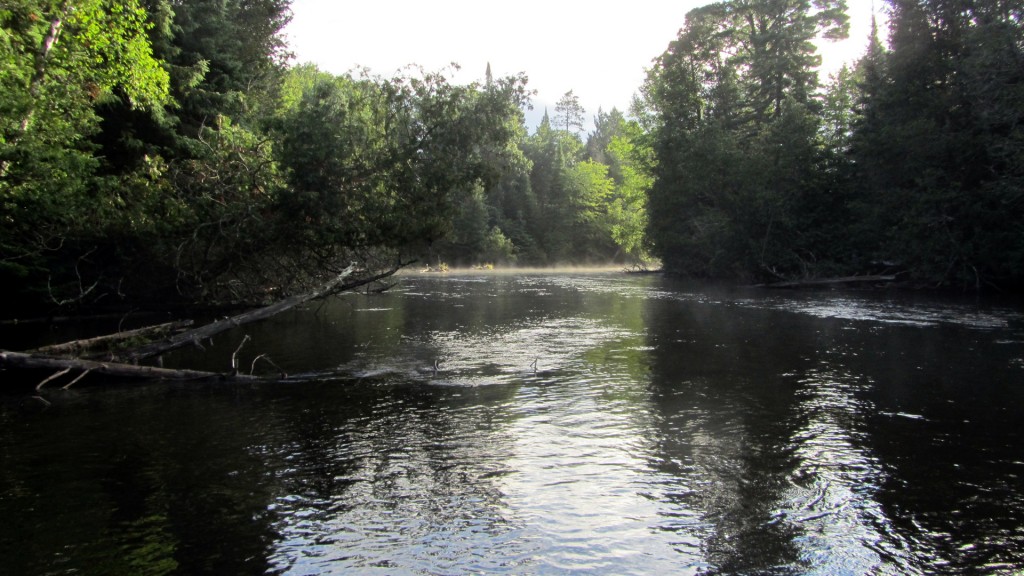 It was a beautiful morning with mist rising from the water surface, not another person to be seen and the promise of Trico and Blue Winged Olive hatches to come. My thoughts on fishing familiar waters and confidence proved partially correct as I hooked into over a dozen trout. I fished comfortably through a few heavy downpours later in the day, enjoying my recently purchased Simms rain jacket. No huge fish were caught, but plenty of average sized browns with nice vivid colouring, along with some smaller rainbow and brook trout. Not surprisingly, my nicest fish came from a hole directly in front of the house my wife and I commonly rent. 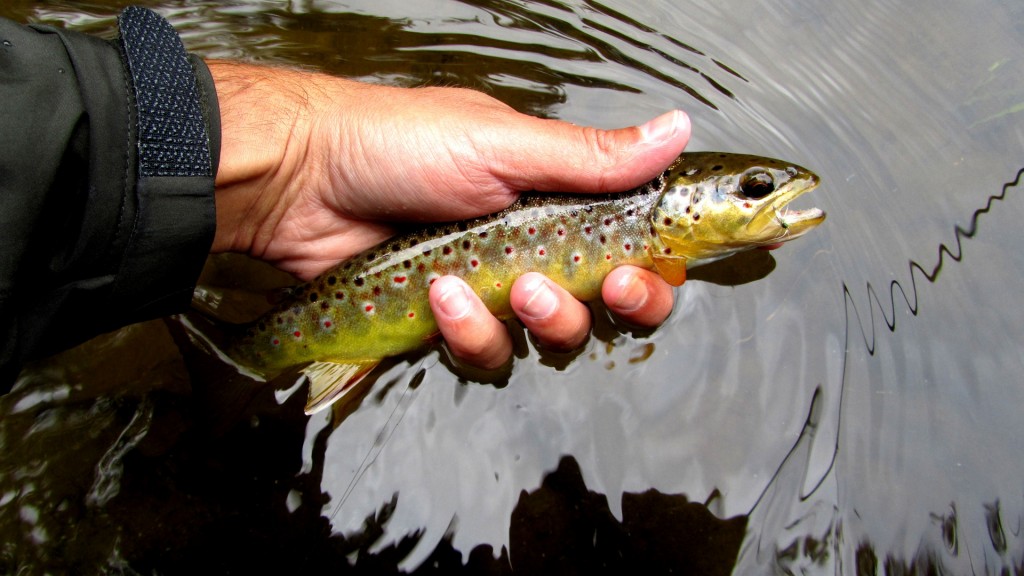 One of many nice looking Au Sable Brown Trout caught during a BWO hatch. 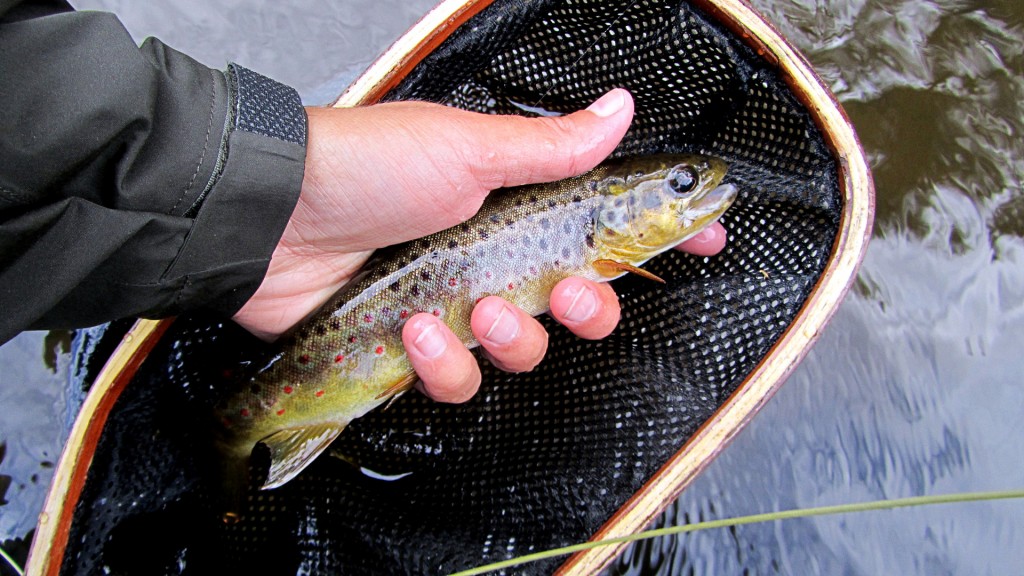 Another fine looking trout. I never get tired of catching these. 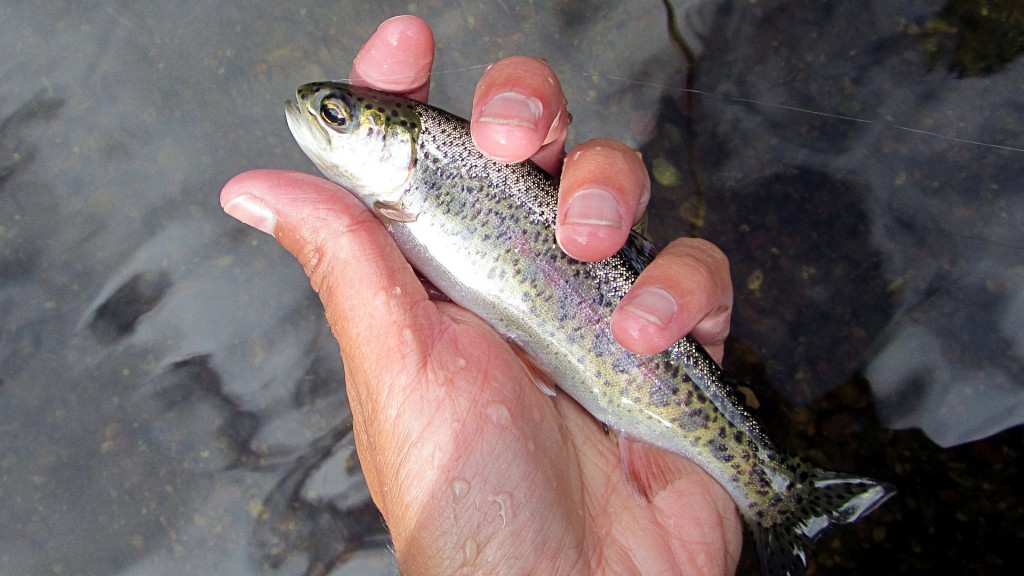 One of many small Rainbows caught rising to Tricos in some riffle water. 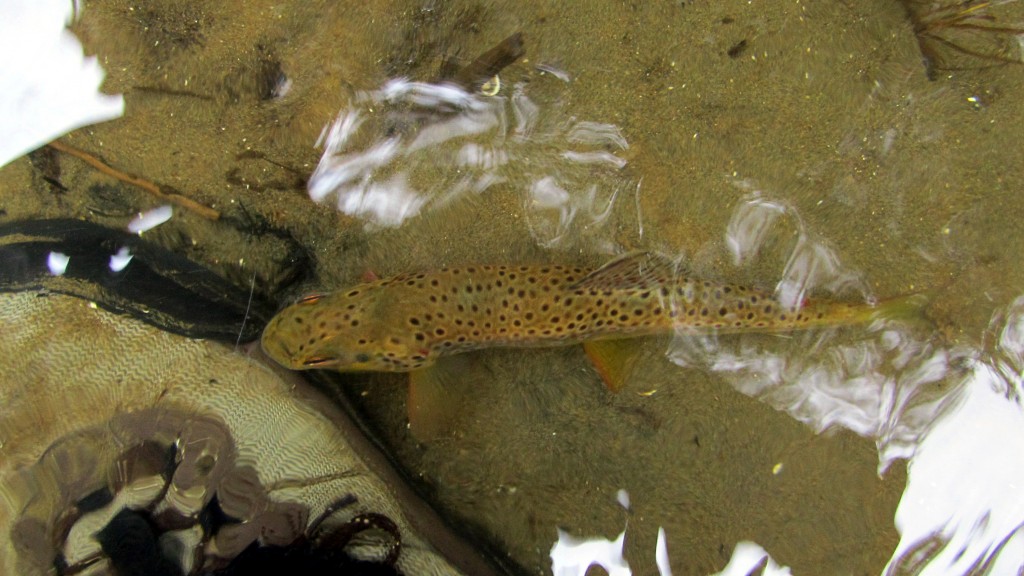 Brown Trout resting by my foot after being released.

I think I’ve mentioned this before, but perhaps my favourite part of fishing the Holy Waters is the fact that you’re likely to catch Brown, Rainbow and Brook Trout on the same piece of water – in addition to the possibility of fooling one of the wise trophy Browns that inhabit this area.

After a total of eight hours of fishing with lots of wading involved, I was faced with a daunting 6 hour drive (turned into 8 with traffic and stops). Needless to say, it was not an easy drive and it probably was not wise to spend so much time on the water before having to make such a long drive alone. I hit some nasty traffic on I-75 and ended up having to pull over and rest for 45 minutes to avoid getting too sleepy. After crossing the Blue Water Bridge into Sarnia, I was greeted with one of the nicer rainbows I have seen (the kind in the sky, not the kind you catch). Actually, it was a double rainbow, though the second is barely visible in the picture below.

Nice looking rainbow after a break in rain on the way home.

It could be argued that this was both one of my least and most eventful Au Sable trips to date, if that makes any sense. I’m sure one of these days, I’m going to have a boring trip that goes exactly as planned where I catch more fish than I can handle.