I don’t often travel too far from home to fish, but the constant reminder of local river politics and declining conditions has given me the itch to fish elsewhere lately. So, a couple weeks ago, I ventured out for an evening of fishing with a friend.

We drove for a couple hours to a river that has been on my short list of must-visit spots for this season. I hadn’t been on this particular river in over a decade and never to the section we were heading to. The water here was stunning… a great combination of riffles, runs and pools with lots of depth and variety. It was some of the fishiest looking water I’d seen in a long time. Unfortunately though, as the temperature continued to drop, the conditions were not quite ideal. A few Isonychia duns could be seen flying about during the early evening and eventually, as the daylight dwindled, they were replaced by a moderate number of spinners and a few stoneflies.

This was a last minute trip and I’d been slacking on replenishing my fly boxes once again, so I was pretty low on fly selection. When my limited number of Isonychia patterns weren’t doing the trick, I decided to try a small yellow sally stimulator, as I’d seen a few flying around. I spotted what appeared to be an average fish rising in some slow water on the other side of a seam and I presented my fly slightly upstream with enough slack to drift over the fish before drag set in. The gulp that followed was shocking. 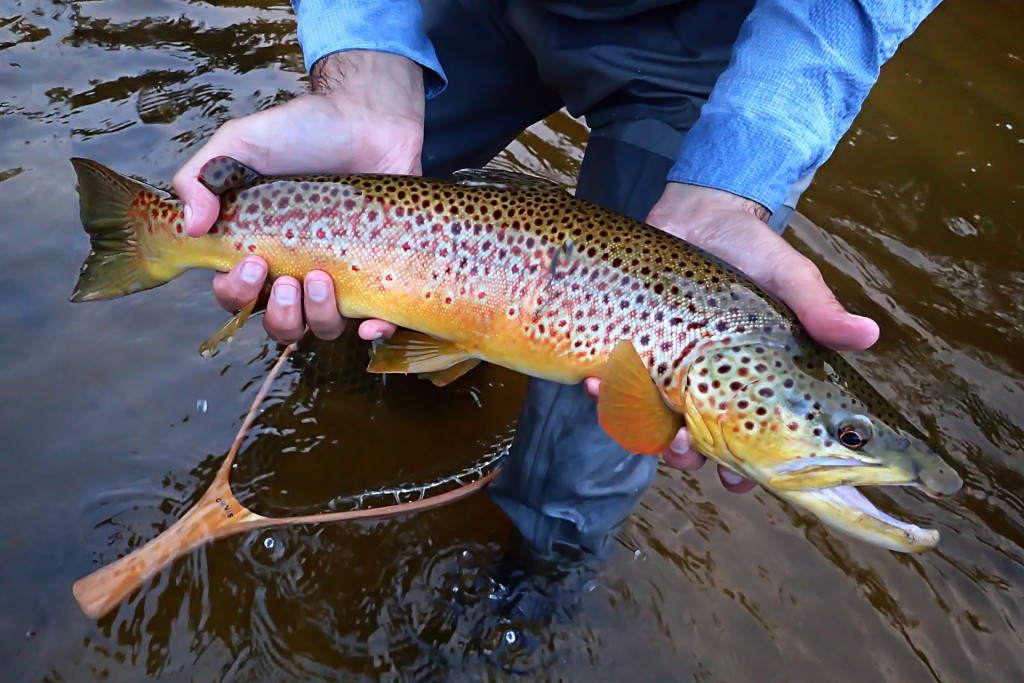 An unexpected, colourful 22″ brown trout to finish off the evening.