END_OF_DOCUMENT_TOKEN_TO_BE_REPLACED

The warmer days of summer are here and with that comes some excellent night fishing opportunities. I still get funny looks when I mention fishing after dark to my buddies around here. I picked up on this addiction after several years of fishing the Au Sable river in Michigan. My wife and I rent a place on the Holy Waters section of the Au Sable main branch and there are a couple fantastic holes right right next to the property. I’d heard stories of the monster fish that inhabited those holes, but for years I was not able to see or catch them.

I still remember a few relaxing nights on the deck where we would repeatedly hear huge splashes in that hole – a big brown smashing prey no doubt. It was after this that I realized just how aggressive these fish get when the sun goes down. A couple years later I caught my first 20+” fish in that very hole after dark, on a big mouse pattern. I lost it before I was able to get it to the net, but I still consider it my first real night fishing success.

Night fishing is so popular out there that Gates Au Sable Lodge began hosting an annual Midnight Fly Fishing Derby, where pairs of anglers head out for an evening fishing tournament in hopes of landing the biggest fish.

Since then, I’ve been doing a bit of night fishing back home in Southern Ontario. Last weekend was my first real chance this year and it was no let down. I landed an 18-20″ fish and lost 2 other similarly sized fish in the span of about an hour. 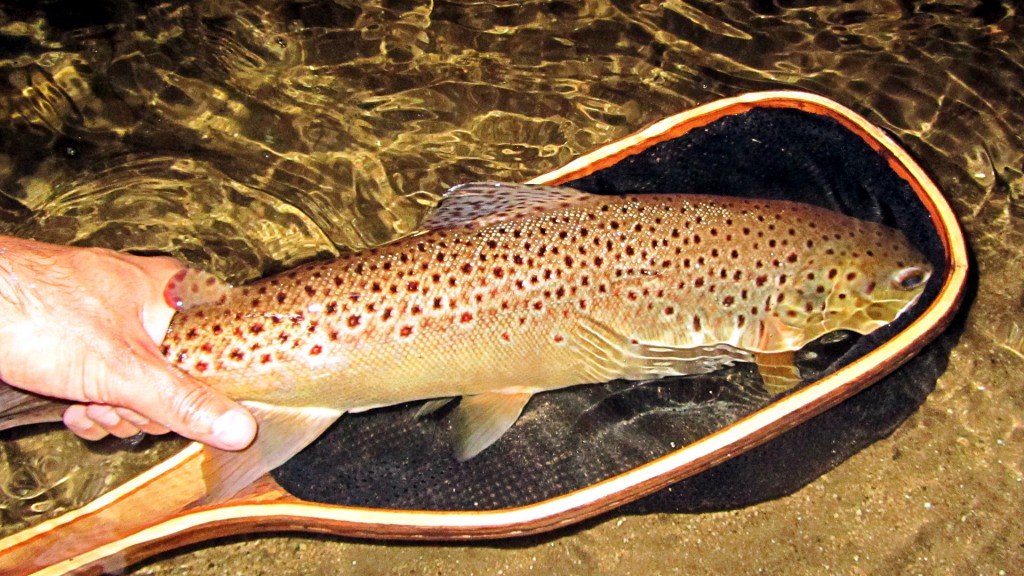 18-20″ Brown caught after dark on a Southern Ontario river

The same rules apply here as they do in Michigan… huge browns come out of hiding about half an hour after the sun completely sets. Here’s are a few things that I’ve found increase my odds when fishing at night for big browns.

1. Use big flashy flies.
I have no doubt that casting a standard dry fly or streamer will catch fish. However I’ve found that consistently catching larger fish is both easier and more fun with a large (up to size 2-4) top water fly like a Gurgler or Mouse. With these flies, not only are they easier to see (or feel), but you generally strip them in and don’t have to worry much about getting that perfect drift or presentation. They also disturb the surface enough to attract predatory fish from all around.

2. Use darker colors.
The smaller the fly, the more important this is. When I fish a Gurgler, I don’t bother with darker colors as I prefer fishing a bright/white fly that is easier to see. A size 2 fly is large enough and disturbs the water enough that the fish are going to see and/or hear it regardless. If you’re fishing smaller dry flies however, you want to be using a preferably black fly which creates a more visible silhouette against the night sky. This seemed counter intuitive to me at first since black is much more difficult for the angler to see. However, we’re looking down from above – a completely different viewpoint than the fish. I’ve heard it described as washing your fly if you try to fish a white dry fly at night.

3. Shorten your leader and use larger tippet.
I learned this lesson the hard way, more than once. Since you’re casting (almost) blindly, you will be dealing with line tangles from time to time. Having a shorter leader definitely helps here. On top of that, the fish are not shy at night and there’s no need to keep your 10-12 foot leaders and tiny tippet. In fact, when I know there are big fish around, I have been going down as low as 4-6 foot 2x tippet. When a huge brown smashes a top water fly as you’re stripping it in, especially when you don’t see it happen, it’s easy for them to snap off even 4x tippet (I’ve had this happen).

4. Know the water and get into a favorable casting position.
Don’t try to wade a river like you would during the day. Pick a hole that looks like it holds a lot of fish and stay put. If you really know the river well, you might be able to move carefully between a few holes, but often you can spend a lot of time at a single location at night. If you’re stripping top water flies, cast downstream and strip them back upstream. This is a very forgiving way to cast at night and accuracy is not too important. I’ve also had success dead drifting flies, especially mice, though it requires a bit more practice to get a feel of where your fly is landing when you can barely see. 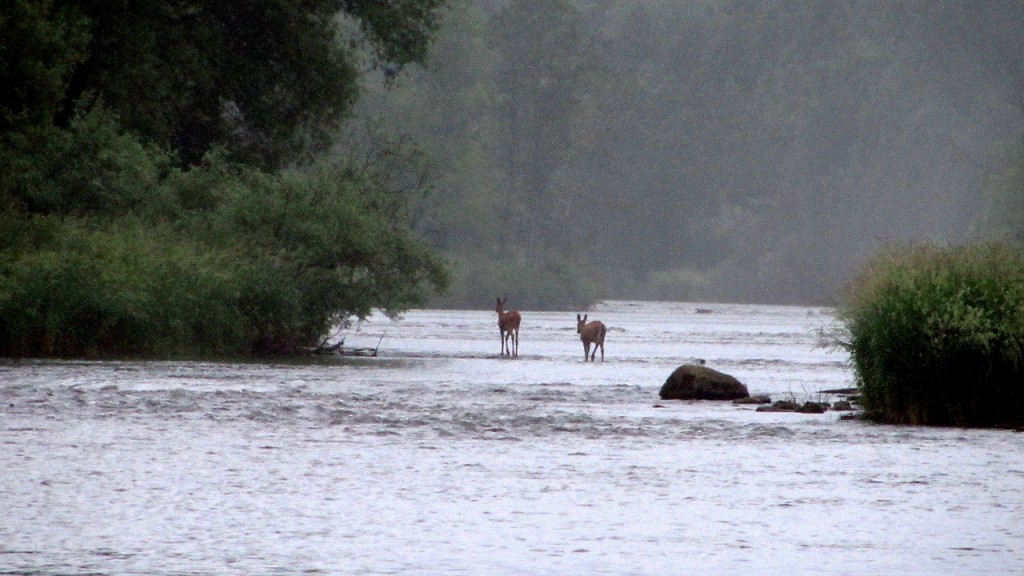