Anyone who’s had the fortune to discover the beauty and allure of fly fishing the Upper Credit River for wild Brown and Brook Trout in years past surely has a heavy heart when they consider its current situation. The Upper Credit has always been a touchy subject. For decades, merely saying the name around those who fished it would result in a visible tightening of their lips. Today, you’re more likely to trigger a two hour rant about how the MNR and other groups have decimated the river with their misguided Atlantic Salmon Restoration Program and lack of focus on restoration and maintenance of the existing wild trout fishery. 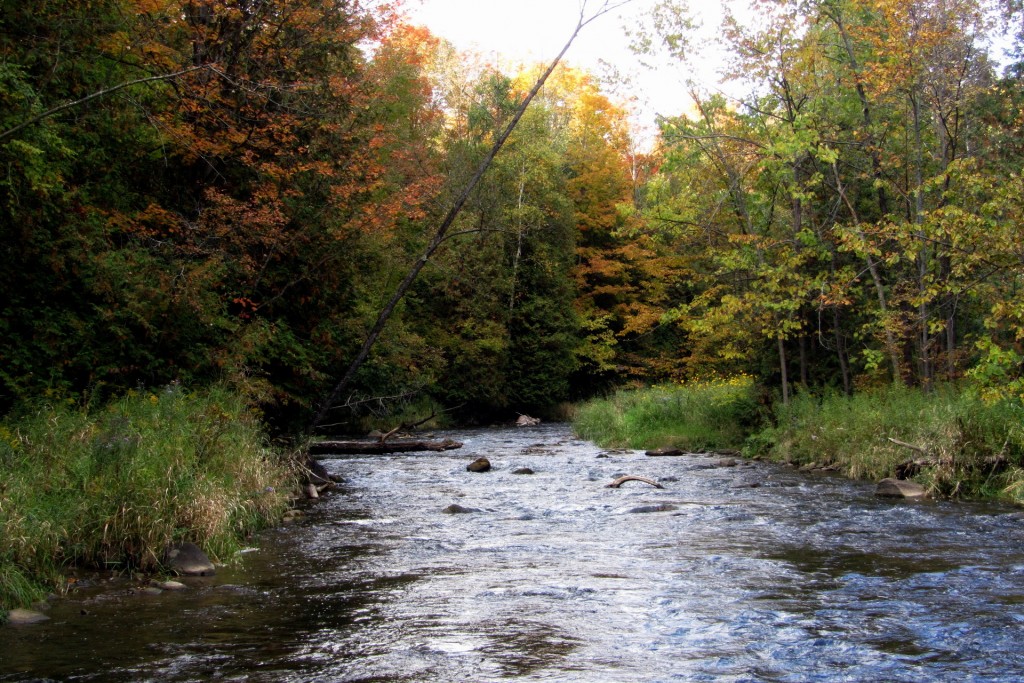 In an effort to start things off on a more positive note, I want to share a couple great videos that my friend Steve Noakes compiled, sharing some of his fly fishing experiences on the Upper Credit River over the years. He’s a strong advocate for protecting what we have on the Credit River today and has been heavily involved in numerous conservation groups and restoration projects. If you ever doubted whether the Credit has a wild Brown Trout fishery worth protecting, Steve’s videos do a good job convincing you it does!

I’ve already written a bunch about the issues the river is currently facing, some of which you can read here. There’s also an interesting thesis on the subject, written a few years ago by a University of Waterloo student. April Vokey even made a stop at the Credit River during part of the first episode of Shorelines last year, where she interviewed and talked with several key people on the subject. Although you won’t find a lot of political debate or side-taking on the show, I’ve heard from at least a couple people who have exchanged words or email with her, that it was shocking how many strongly opposing voices were encountered during the process.

I find it interesting that after so many years of having such a high quality resident trout fishery, only now are people starting to talk about it publicly. In fact, The New Fly Fisher even aired a show on fly fishing for Brown Trout on the Credit recently, something that I believe would not have happened during the river’s tight-lipped past. I can only wonder whether part of the inspiration for airing this was to raise awareness of the river and the great wild trout fishery that exists, at a time when the river has little left to lose (i.e. Atlantic program and proposed Brown Trout culling by MNR). I could probably write a whole series of blog posts on the subject of naming rivers, but the long and short of it is: perhaps things would look differently today if there had been less secrecy, more awareness and more voices to speak up.

All is not lost (at least not yet), but if things don’t change, it will be. I mentioned the proposed Brown Trout culling above and also in previous posts. The unfortunate truth is, even though this is only still a draft proposal, there is already culling going on in secrecy. There is evidence of at least one occurrence of a number of large browns being lifted out of a section of the upper river. I’m not sure where they were taken, but my guess is they either died during the lifting/transfer process or they were dumped somewhere into the lower river where they will die shortly afterwards (and where there is no suitable spawning habitat).

It seems that every time I write a post on this subject, I have to cut out three quarters of what I want to say just to keep things on topic and interesting. Rather than having all this information eventually get buried in old blog posts, I plan to add a new top-level page to this site that’s dedicated to the topic and more easily accessible. If you have pictures, videos, information or simply ideas you’d like to share on this subject, feel free to let me know and I’ll consider adding it to that page or linking it.

Despite the gloom, I’m very much looking forward to getting back on the river when the season opens and making the most of what we still have. Only one month left until opener!