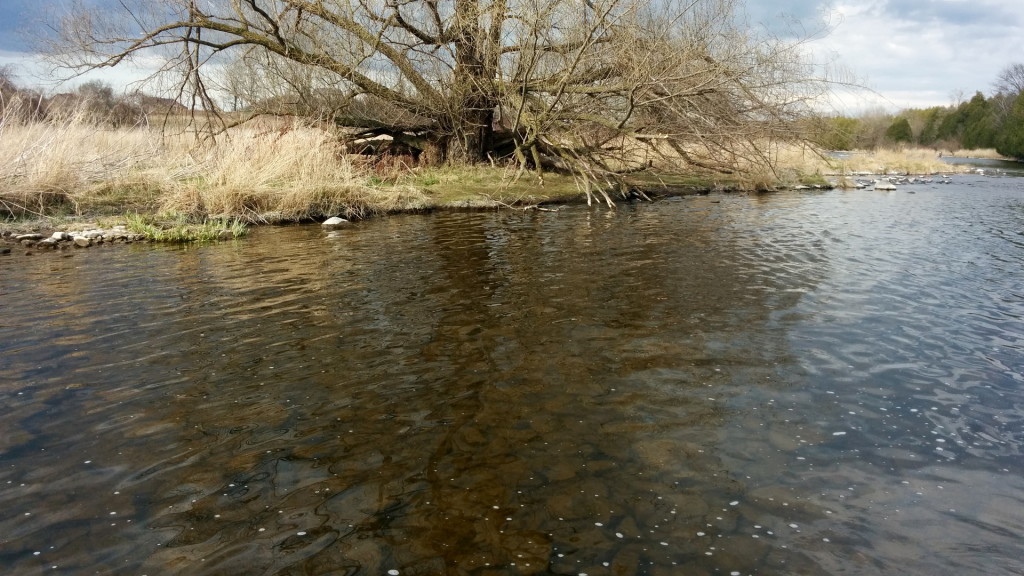 Unlike me, I kicked off the season with a steelhead trip to the Beaver river.  We brought along local guide Nick Groves to show us the ropes on this unfamiliar river and share some of his steelhead knowledge and tactics.  Nick, being a Winston pro staffer, also brought along a couple Boron III switch rods for us to use.  I’m completely new to the world of two handed rods and these were a lot of fun to fish.  When I think of two handed rods, I immediately think of swinging streamers or wet flies.  However, Nick is a nymph fisherman through and through and as such, that’s what we stuck to for most of the day.  It was interesting to experience how much easier (once you get the hang of it) it is to cast these rods compared to 10′ single handers.  On top of that, mending line and controlling a drift at much longer distances becomes a lot easier with the added length. 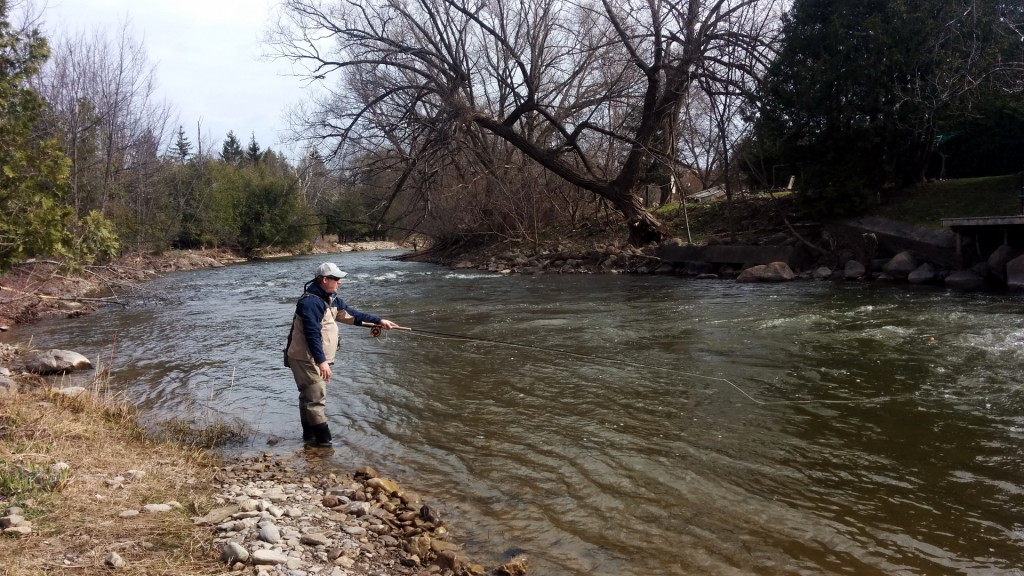 After waking pre-5 am, driving for nearly two hours and stopping for an early Timmies breakfast, we were on the river shortly after 7 am.  I was thankful for bringing along my gloves as it was cold (both air and water).  We covered a lot of water on a few different sections throughout the day, but the combination of colder than normal temps and general lack of fish made things difficult.  I was the only one to hook into a fish, but proceeded to lose it from both lack of readiness and also from fumbling around with my (heavier than I’m used to) 11′ rod.  We met a couple guys that did get into a fish or two, but most people seemed to be sharing our limited success.  This wasn’t a disappointment by any means however, as we had very realistic expectations going into this.  We had a good time, explored a lot of really nice looking water throughout the day and I personally felt that I left with an increased confidence level for my future steelhead excursions.

A couple days after our Beaver River trip, I decided to head to the lower Credit to put my new found confidence to the test.  I wasn’t able to fish the morning and opted instead to go the more difficult route of fishing the low waters throughout the sunny afternoon.  When I arrived, there were a couple cars parked at the access point – and within an hour or so, they had all left.  You know the fishing is slow when there’s nobody fishing the lower Credit for steelhead during opening week! 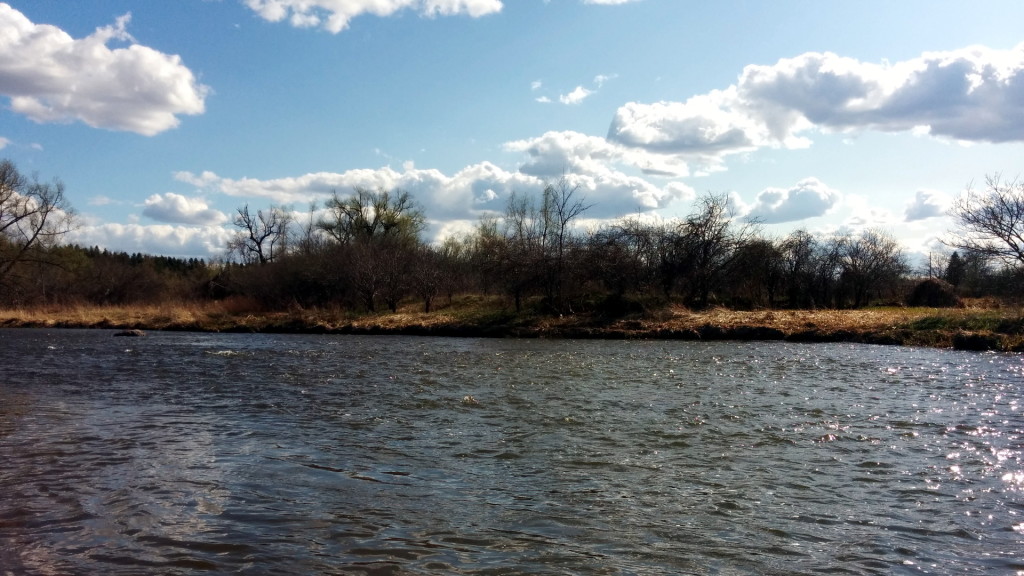 A wide section of the unusually quiet lower Credit River on a sunny afternoon.

Slow or not, I know that decent numbers of steelhead had come up into this section of river days before and there had to be the odd fish kicking around. I geared up with a rig similar to what we’d used on the Beaver and patiently drifted what little productive looking water still existed in these low flows.  My patience paid off as I hooked into my first Credit River steelhead an hour or two in.  She took a Hare’s Ear nymph in a deep run and considering I was fishing an 8 weight rod, gave it a pretty serious workout! 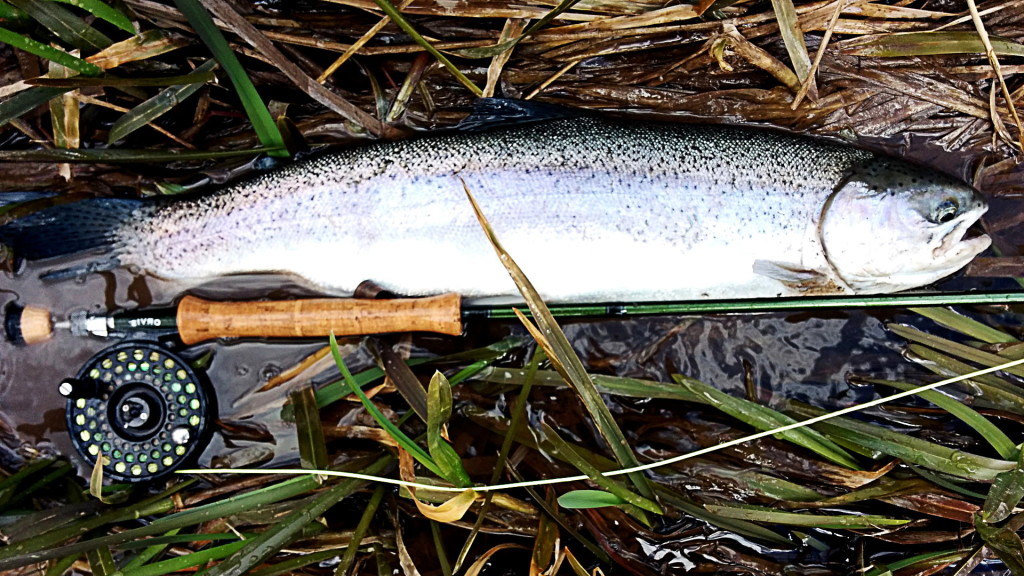 A hard earned Steelhead from the Credit River during opening week.

I spent a few more hours on the river but failed to get into any more steelhead. I did however hook an unexpected 18-20″ brown trout while working my way back upstream.  It took a pheasant tail nymph and also put up a very good fight.  As is typical when I’m fishing by myself and dealing with big fish, it managed to wriggle itself free before I could snap a picture (yeah… sounds like a fish story, I know).

In what’s slightly more my style, I also spent a large part of the week scouting smaller streams for native brookies.  I typically choose to target these fish early in the season, while the water is still cold and high enough for them.  Unfortunately, the high enough part didn’t really hold true this year as water levels were also very low in these small streams.  This made finding fish more difficult than normal and also made stealth much more important on these small streams.  Still, I had a good amount of success swinging bead head soft hackles and skating dry flies on the surface.  The net result was a lot of quiet water and plenty of colourful Brook Trout. 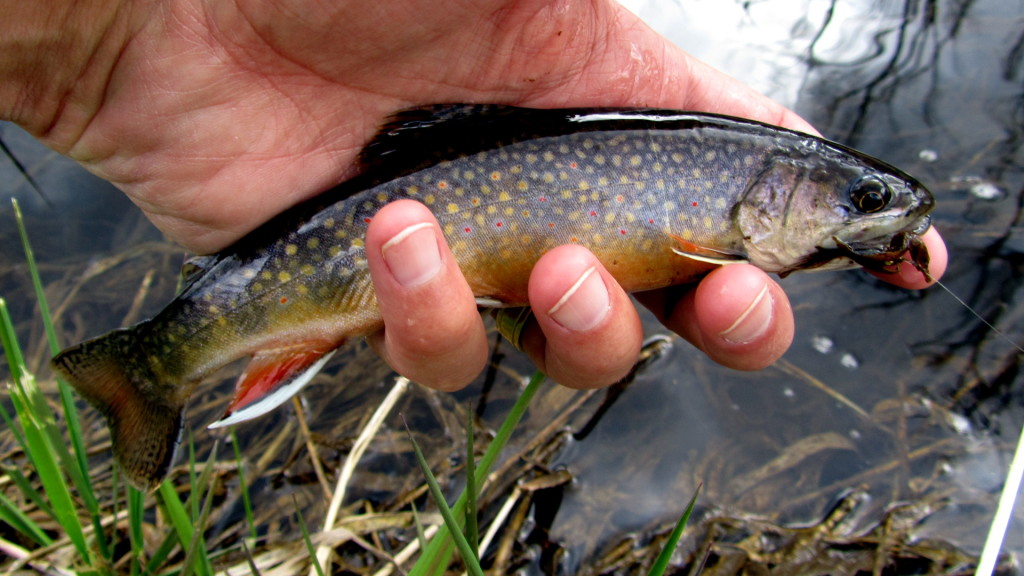 My 3 weight experienced lots of small colourful Brook Trout like this throughout the week.

Despite a decent amount of bug activity this past week, there were little to no fish rising.  On the brook trout waters I fished, there were a lot of small black stoneflies. When sub-surface patterns weren’t doing the trick, I tried a couple basic imitations, but dead drifting dries (unsurprisingly) didn’t seem to entice any strikes. Once I tried skating dries across the surface though, it really drove the brookies crazy and I got into a lot more fish! 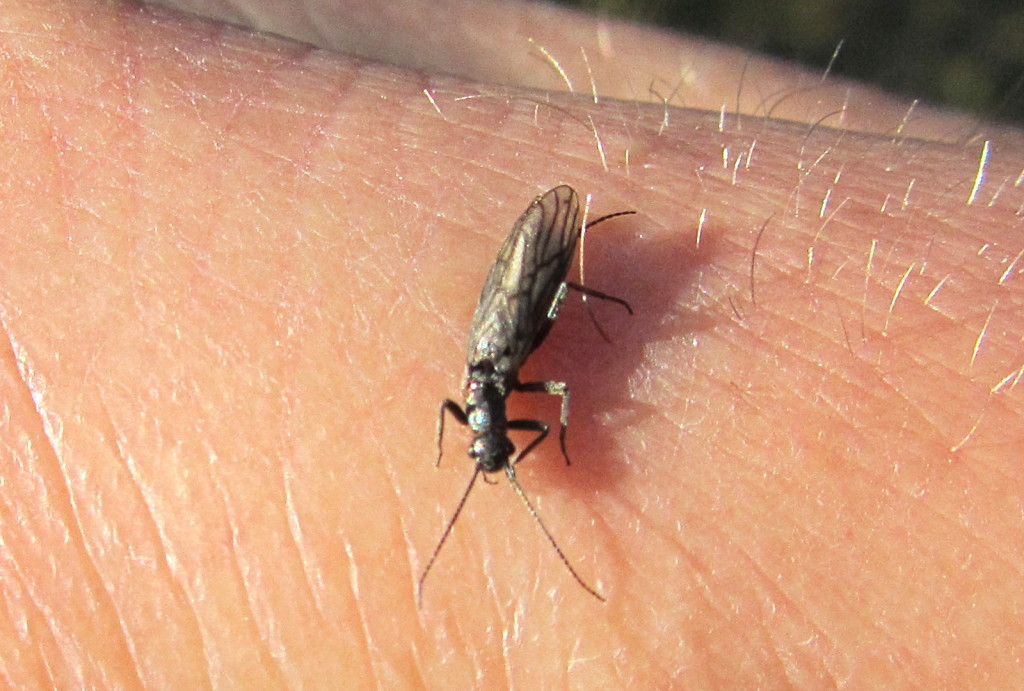 Lots of small black stoneflies were seen on many of the brookie streams.

Finally, my opener wouldn’t be complete without a trip to the Grand River. After walking my kids to school and making a few stops along the way (including Rob Heal and gang’s new fly shop, Grand River Outfitting), I didn’t get on the river until after noon again. With flows approaching 4 cms, which is quit a bit lower than the Grand’s average summertime lows, lack of water once again made things difficult. I certainly have myself to blame for bypassing the morning fish again, which was apparently pretty decent.  There were some pretty thick Hendrickson hatches in the middle river – the water was literally lined with them – but I didn’t see even a single fish rise to take advantage of it. One of the bugs I caught during this hatch looked an awful lot like a Grey Fox… but I was not aware they hatched this early in the season. Perhaps I’m mistaken in my bug identification though. 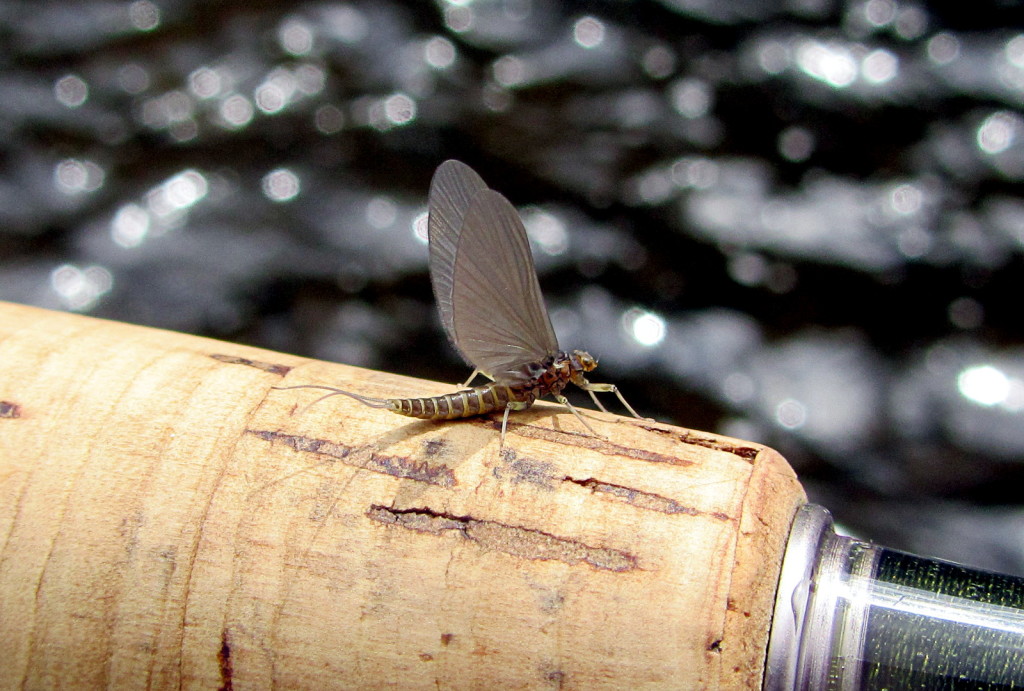 What seems to be a very unexpectedly early Grey Fox Dun during a fairly heavy hatch on the middle Grand River last week.

I fished the mid and upper sections and very nearly got skunked before getting a decent drift through a very difficult to cast to (and control) piece of bank-side water with my secret nymph.  A big brown eagerly snatched it up and after a difficult fight, including trying to force it out of some sunken structure on 5X tippet, I got my first taste of big Grand River browns for the 2015 season! 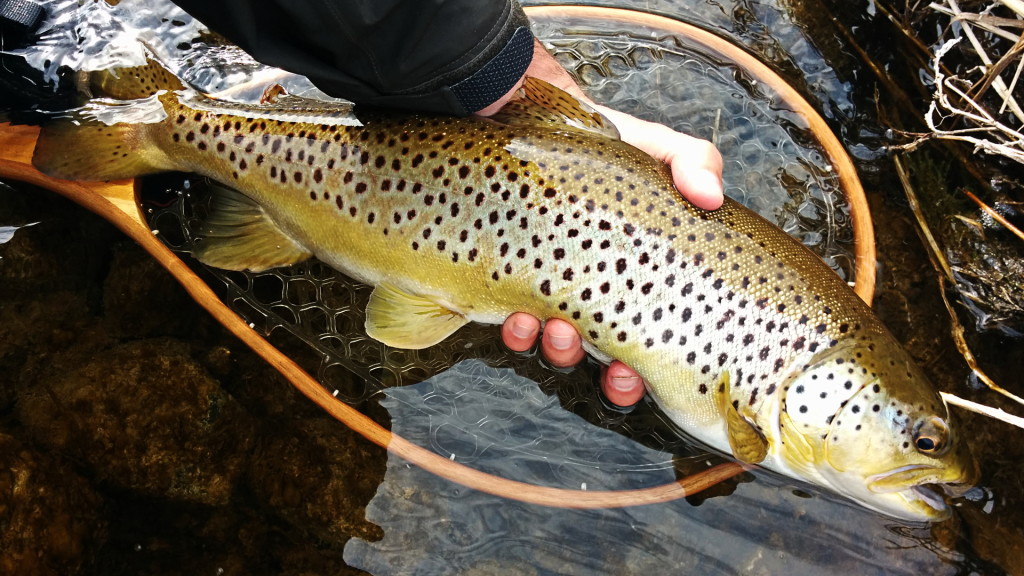 In all the excitement, after snapping a couple photos and releasing the fish, I waded quite far downstream and fished for another hour or so before realizing that I no longer had my net.  I’d left it exactly where it appears in the picture above, floating in some shallow water on the side of the river.  This was a Christmas present from my wife and I wasn’t looking forward to telling her I’d lost it.  I headed back to the spot I landed the fish, only to find the net missing.  I then walked downstream from that spot again and luckily found the net hung up on a rock in the middle of the river!

I’m back to work tomorrow and next weekend is both Mother’s Day and my wife’s Birthday, so I have a feeling there won’t be much fishing to be had in the next week or so.  Hopefully we get some rain by then to normalize the river conditions a bit.